Dear white people: Frederick Douglass explains the Trump resistance in "What to the Slave Is the Fourth of July?" 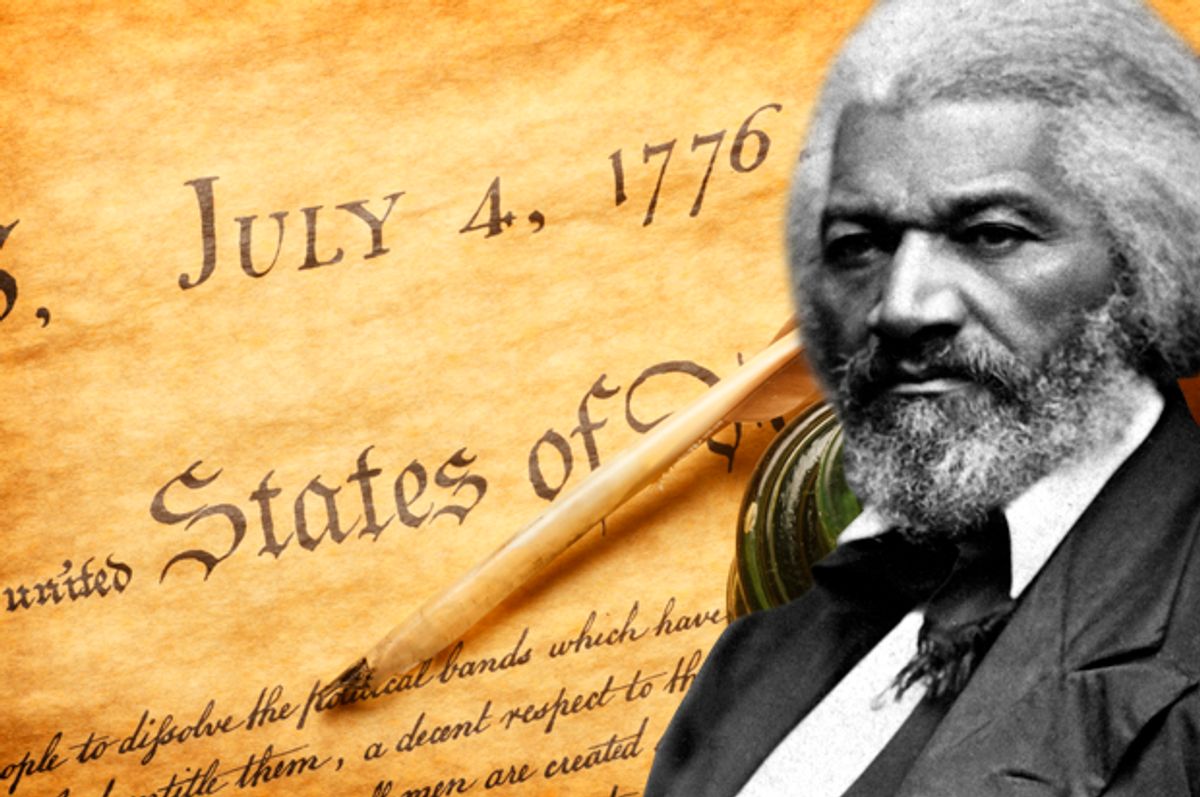 Every year on this day I read Frederick Douglass' 1852 speech "What to the Slave Is the Fourth of July?" This apex of American words and letters is a demand for citizenship and freedom. It is also a searing indictment of a so-called democracy in which white-on-black chattel slavery was the rule of the land.

More than 150 years after it was first delivered, "What to the Slave Is the Fourth of July?" still resonates because the color line remains one of America's great contradictions and unresolved projects. In today's America, white supremacy is like a ghost or shade that still haunts our democracy: Its ominous shadow looms over voting, the policing of black and brown communities, disparities in wealth and income, the labor market, housing, education, the courts and a society where a person's skin color still impacts how they are marked as deserving full and equal dignity.

Douglass begins by delivering an extended tribute to the courage and spirit of the American Revolution, one tinged at many moments with rueful irony. He compares America's Independence Day to the Jewish holiday of Passover, a parallel whose significance would have been lost on no one in the 1850s. He describes the birth of the American nation as a scene "simple, dignified and sublime." He observes, "I am not wanting in respect for the fathers of this republic," while adding that "the point from which I am compelled to view them is not, certainly, the most favorable." Then he shifts to his central theme.

What, to the American slave, is your 4th of July? I answer: a day that reveals to him, more than all other days in the year, the gross injustice and cruelty to which he is the constant victim. To him, your celebration is a sham; your boasted liberty, an unholy license; your national greatness, swelling vanity; your sounds of rejoicing are empty and heartless; your denunciations of tyrants, brass fronted impudence; your shouts of liberty and equality, hollow mockery; your prayers and hymns, your sermons and thanksgivings, with all your religious parade, and solemnity, are, to him, mere bombast, fraud, deception, impiety, and hypocrisy — a thin veil to cover up crimes which would disgrace a nation of savages. There is not a nation on the earth guilty of practices, more shocking and bloody, than are the people of these United States, at this very hour.

Then comes the gut-punch to the hypocritical character of America's supposed democracy.

Fellow-citizens! I will not enlarge further on your national inconsistencies. The existence of slavery in this country brands your republicanism as a sham, your humanity as a base pretence, and your Christianity as a lie.

For those of us who are the children of the Black Atlantic, Douglass' words are like a voice in our ears across time. His words inspire us; his words are also a caution and a warning.

Today is also the first Fourth of July under Donald Trump as president of the United States. He is a racial authoritarian and plutocrat who yearns to "Make America Great Again!" by waging a war on the civil rights of black and brown Americans, women, gays and lesbians, Hispanics and Latinos, Muslims and any other people who do not fit his far-right Herrenvolk nightmare. Trump is not the president of all Americans, but rather the leader of white conservatives and other backward-looking revanchists.

Douglass' "What to the Slave Is the Fourth of July?" resonates with peculiar strength in the age of Donald Trump.

Frederick Douglass was a black American born into the racial terrorism and tyranny of chattel slavery. He later self-manumitted, escaping to "freedom" in the North. Because of those experiences, Douglass intimately understood what it was like to be viewed as an internal enemy or as an alien other and pollutant within the country of your birth.

To survive as a "nation within a nation," black Americans could not afford to be politically naive. By comparison, political naiveté is one of the great luxuries afforded by white privilege. This naiveté helps to explain why so many white Americans were totally unprepared and shocked by the election of Trump. Alas, entirely too many white people were in denial about the threat posed by this indigenous form of "soft fascism," meekly wondering whether it could really happen here. Black Americans (like First Nations people, Japanese-Americans and other people of color) always knew it could, because for centuries we have been victims of the country's anti-democratic impulses, laws and traditions.

For many white Americans, it must be an odd and frightening feeling to no longer have the comfort of assuming that the president and the punitive, punishing, and potentially cruel power he commands will not be directed against your community.

I wonder whether the election of Donald Trump, and the terror and fear he inspires in many people of all races and backgrounds, could force white Americans to seek out a reciprocal and equal alliance with black Americans and other people of color?

Maybe the white racism that propelled Trump to the White House can be abandoned in favor of fighting for a social safety net, a humane society and a true "We the People" democracy that protects all Americans equally.

Likewise, the "white working class" about which we have heard far too much could perhaps have an epiphany, in which it realizes that ruling elites have for centuries turned lower-income whites against people of color with the goal of serving their own greed and narrow self-interest.

I am doubtful that such revelations will occur. The psychological and material wages of whiteness remain too great.

Nevertheless, I hold out hope that on this Independence Day above all others many white folks will read "What to the Slave Is the Fourth of July?" and experience a transformative awakening, where they decide to betray "whiteness" and ally with their fellow Americans of color to make possible a better country, and a better world. Such dreams and hopes are radical and resistant acts in a country where the color line still dominates and a would-be fascist dictator is our president. By themselves such actions do not defeat the powerful or remedy social injustices and political wrongs. But they can be a start.