Is this the future we want?

How speculative fiction is uniquely suited to help us talk, even across party lines, about our social politics 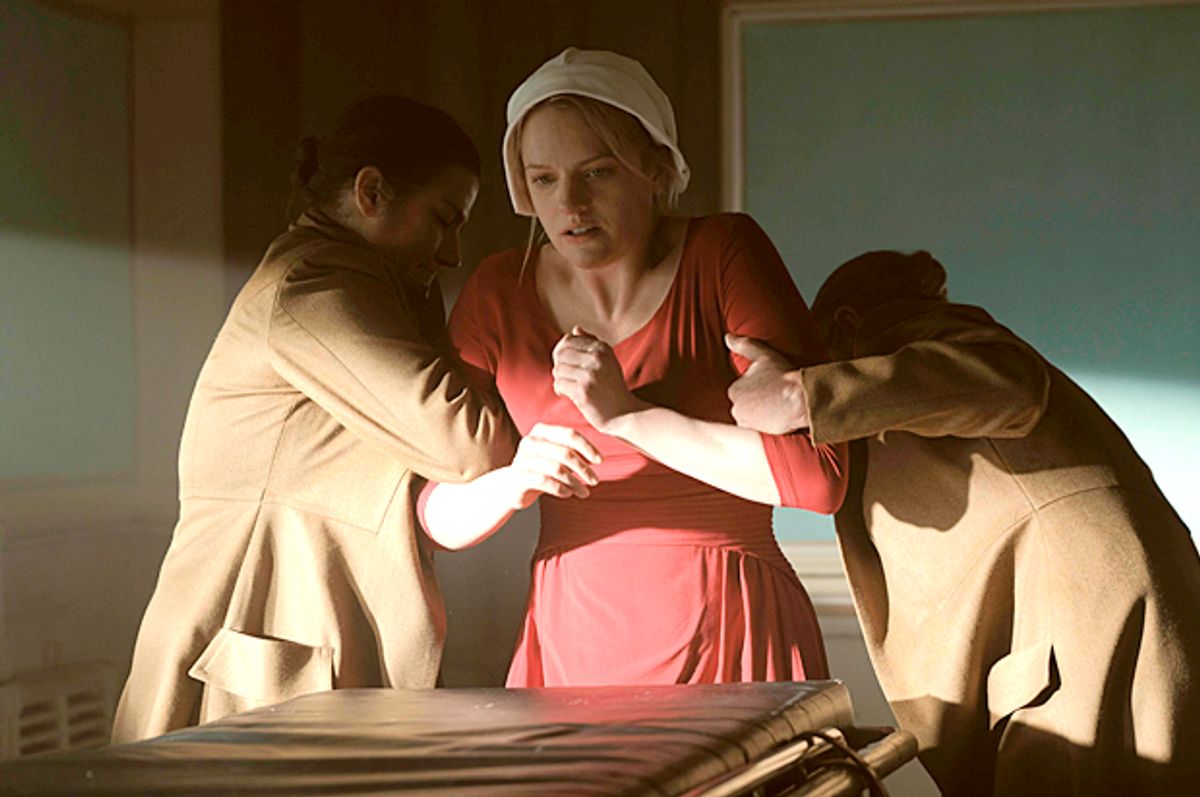 Elisabeth Moss as Offred in "The Handmaid's Tale" (Hulu/George Kraychyk)
--

As a Southern girl, born and raised, there are few rules of polite society that have stuck with me quite like, “Thou shalt not talk politics at the dinner table.” Of course, the proverbial “table” has come to mean all social settings at which I want the people in attendance to still like me. To this day, any time someone brings up so much as a politically-leaning "Saturday Night Live" skit I have a gut instinct to change the subject to — I don’t know — flower arrangements or "The Bachelor." This is to say that I am a virtual noob when it comes to engaging in political discourse with friends and family.

A few weeks ago my book club chose Margaret Atwood’s "The Handmaid’s Tale" for our monthly selection. Seven Southern girls found ourselves sitting around discussing reproductive rights over wine and Thai food — and wouldn’t you know "The Bachelor" was on hiatus? But it was actually — dare I say? — OK. We ate. We drank. We talked about gender politics and female complicity in the subjugation of our sex. Nobody yelled and we all listened. What was this blood magic and did Miss Manners know about it?

That’s the magic of speculative fiction, a genre I’ve long enjoyed but didn’t begin to analyze until I became a speculative fiction writer myself, and then again when the 2016 election rolled around. To paraphrase Atwood, speculative fiction is narrative about a future we can plausibly describe. These stories aren’t about galaxies far, far away, but instead, imagine our own world grappling with the effects of technological advancements and other societal shifts that feel like they might exist just over the horizon.

The point of a good speculative fiction novel is for the reader to reach the end and ask: Is this a future I want?

To be frank, I’m pretty sure this is the exact same question many of us asked ourselves during the 2016 election cycle. Two things happened after November 2016. First, the election marked a fundamental change both in the way and in the amount that we talked about politics. Comment wars erupted onto our Facebook feeds. We logged onto Twitter to a slew of panicked updates. And second, for a large portion of the country, our attitudes drifted away from our previous rah-rah sense of empowerment and toward fear of a future in which the worst outcomes felt possible, and still do.

During that time, I was relieved to have a writing project nearing its final stages to throw myself into. I was drafting "This Is Not the End," a speculative novel in which resurrection technology exists. In the book, legislation has evolved in tandem to regulate the now fundamental human right of resurrection such that each person may make only one resurrection choice on that person’s 18th birthday or the option is forfeited. As I followed my main character Lake through the impossible decision she faces when her best friend and boyfriend both die in a car crash days before her 18th birthday, I realized I’d been asking myself the same question over and over again: Is this a future I desire?

While I thought I’d been doing what I always did — shying away from the faintest sniff of political discourse — it dawned on me that actually I’d been finding my own way to take part in a conversation about things that mattered to me, like social responsibility, individual rights and government having a voice in what happens to our bodies.

I finished writing "This Is Not the End" and (mostly) made my peace with whether the plausible future that I described would be a future I wanted to see take shape. Writing and reading speculative fiction offered a roadmap for evaluating and commenting on social politics. It says, if we let X happen, then Y could also happen. But wait: Are we okay with Y happening?

If the answer is “no way,” then people who read are already in on the secret. Avid readers know the truth of human agency. They realize there’s always a hero and that the real fiction is that ordinary people are powerless to stop greater forces. I’m convinced that’s why some of the fiercest resisters I know are members of my bookish community — editors, publishers, authors and readers — people who know we’re not defenseless against change we don’t wish to see. We’re each protagonists in our own stories.

Over the past year, I’ve come a long way in changing my views on what counts as polite conversation. I’ve been able to turn where I’ve always turned in moments of uncertainty when I’m in need of answers — books. And now that I’ve written my way into the conversation, maybe it’s time I start exploring that dialogue off the pages as well. After all, seven Southern girls were able to talk politics and not a single one had to clutch her pearls. I’m getting a little tired of "The Bachelor" anyway.

Chandler Baker lives in Austin with her husband and toddler where she also works as a corporate attorney. She is the author of five young adult novels and "Whisper Network," a New York Times bestseller and a Reese Witherspoon Book Club pick.