These endocrine disruptors are in our everyday health and beauty products 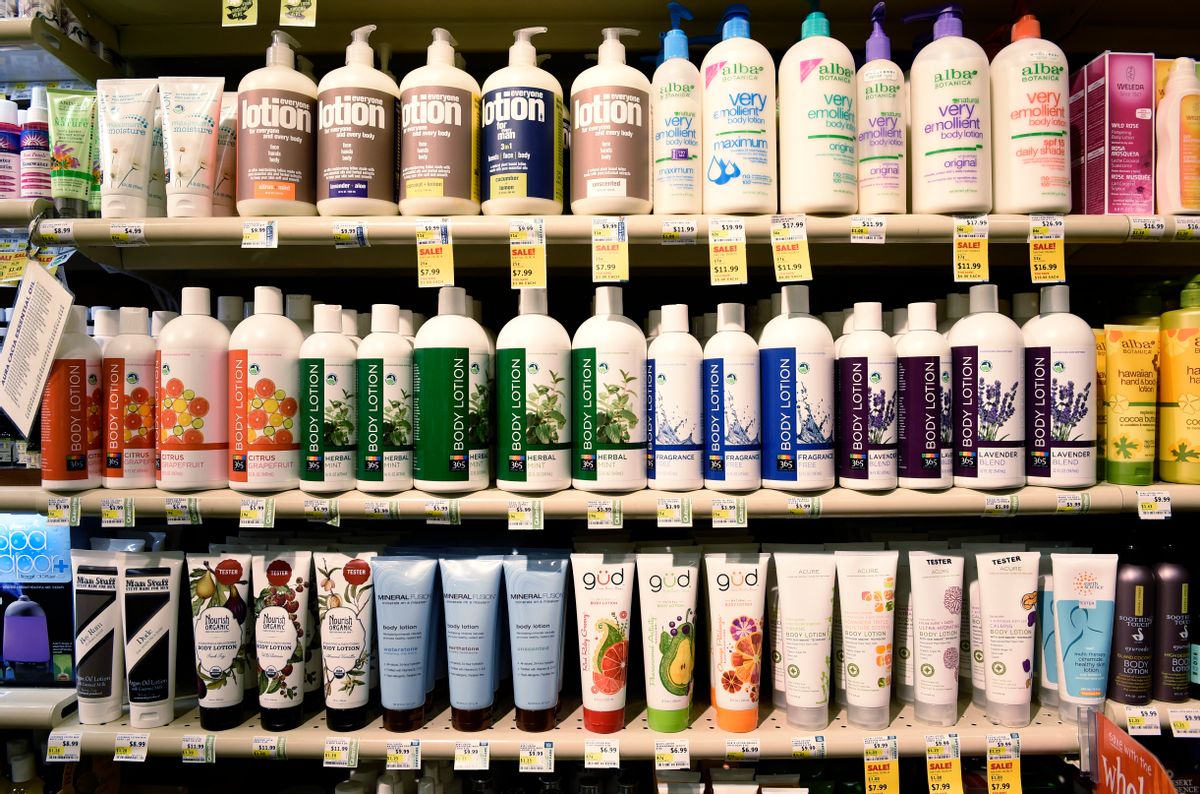 In this photo taken Oct. 9, 2014, body products on display at a Whole Foods in Washington. Theres a strict set of standards for organic foods. But the rules are looser for household cleaners, textiles, cosmetics and the organic dry cleaners down the street. Wander through the grocery store and check out the shelves where some detergents, hand lotions and clothing proclaim organic bona fides. Absent an Agriculture Department seal or certification, there are few ways to tell if those organic claims are bogus. Some retailers, like Whole Foods, have stepped in with their own requirements for what can be labeled organic. (AP Photo/Susan Walsh) (AP Photo/Susan Walsh)
--

More than 200 scientists and public health advocates are urging regulators to take a closer look at the potential dangers of antimicrobial chemicals including triclosan, an additive that has been banned from hand soaps but remains an active ingredient in products ranging from building materials to Colgate’s Total toothpaste.

The call for better labeling and safety evaluation of the widely used substances comes in a paper published today in the journal Environmental Health Perspectives. The scientists say they worry that such chemicals, described as endocrine disruptors, have been linked to reproductive and developmental problems in animals and might harm human fetuses and newborns.

“We therefore call on the international community to limit the production and use of triclosan and triclocarban and to question the use of other anti-microbials,” say the scientists in what they are calling “The Florence Statement,” first introduced at a 2016 conference in Italy.

After decades of consideration, the U.S. Food and Drug Administration issued a final rule last year halting the sale of body washes and liquid and bar soaps containing triclosan or 18 similar ingredients. The FDA determined that scientific evidence did not show that these products were any better at preventing illness than old-fashioned soap and water. At the same time, the agency said, there were questions about possible long-term harm from the antimicrobial chemicals.

The soap sales ban takes effect in September. Yet the chemicals, which attack mold and other microbes but linger in the human body and environment, are still used in more than 2,000 consumer and building products including toothpaste, detergents, clothing, toys, exercise mats, doorknobs and paints, the scientists say.

Substitutes “may be worse”

“Environmental and human exposures to triclosan and triclocarban are widespread, affecting pregnant women, developing fetuses, and breast-feeding babies,” said Rolf Halden, a professor of engineering at Arizona State University and co-author of the new paper. “We must develop better alternatives and prevent unneeded exposures to antimicrobial chemicals.”

One potential problem, however, is that some substitutes have yet to be fully tested and could raise concerns of their own. “I was happy that the FDA finally acted to remove these chemicals from soaps,” said Arlene Blum, executive director of the Green Science Policy Institute in Berkeley, Calif. “But I was dismayed to discover at my local drugstore that most products now contain substitutes that may be worse.”

Colgate, whose Total toothpaste contains .3% triclosan aimed at combating plaque germs, declares on its website: “While the FDA may be unconvinced by the support submitted by the soap companies, that’s not the case with Colgate Total. . . . After an exhaustive review, the agency determined that Colgate Total provides a meaningful therapeutic benefit and is safe for consumers.”

That safety claim, the company says, is based on a review in 2012 by an independent British research organization of 30 studies assessing the effects on oral health of triclosan in toothpaste. While their review focused on the toothpaste’s impact on plaque, gingivitis, periodontitis and tooth decay, the authors also reported finding no serious safety concerns in studies of up to three years long.

The scientists, in their statement today, recommend that triclosan and similar antimicrobials be avoided except “where they provide an evidence-based health benefit” and adequate evidence of safety is available. An example, they said in the statement, would be toothpaste prescribed by doctors to treat gum disease.

The ban on antimicrobial soaps came more than 40 years after the FDA first announced in 1974 that it would evaluate the active ingredients in over-the-counter antimicrobial drug products.

In a statement to FairWarning, the FDA says it is continuing ‘to evaluate the safety and effectiveness of antiseptic ingredients in other products, like consumer antiseptic rubs and health care antiseptics.”

The agency is also evaluating hand sanitizers that are used without water, and has deferred action on three other substances– benzalkonium chloride, benzethonium chloride and chloroxylenol — to allow for new safety and effectiveness data.

The American Cleaning Institute, a trade group for cleaning products makers that had defended the use of triclosan, said in an email to FairWarning that the other three ingredients also are safe and effective.

Signers of the Florence Statement include scientists and health professionals from Sweden, Slovakia, Spain, Ireland, Iceland and other countries, and from U.S. institutions including Stanford, Johns Hopkins and state universities in California, North Carolina, Massachusetts and Arizona.