It wasn't just for the lulz: Bigoted trolls can't get away with claiming they were just kidding

Did the guy who made the Trump-CNN video "apologize"? Nope — like his hero, he just made lame, insulting excuses 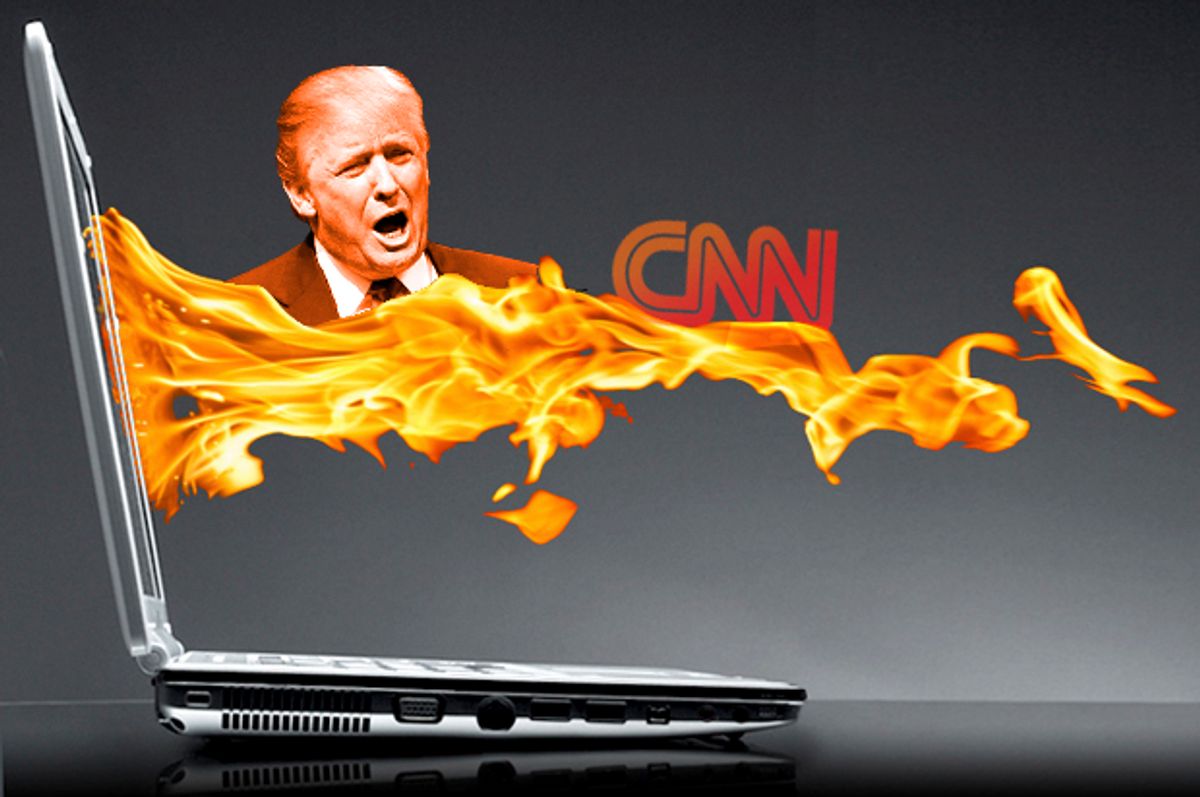 After Donald Trump tweeted out a threatening video that showed him body-slamming and punching a person with the CNN logo pasted over his head — an effect made by editing a real clip from a Trump appearance on a WWE wrestling show — CNN tracked down the source of the original video, a Reddit user who goes by the name HanAssholeSolo. It turned out that this person, described by CNN reporter Andrew Kaczynski as a "middle-aged man," had a long history of writing racist and anti-Semitic posts.

Initially, HanAssholeSolo expressed pride and excitement at Trump sharing his handiwork, writing, "I never expected my meme to be retweeted by the God Emporer [sic] himself!!!" As it became clear that this attention might lead to actual consequences for his fascist-tinged rhetoric — particularly after journalists figured out his real-life identity — HanAssholeSolo shifted gears and posted what nearly all media outlets, including CNN, described as an apology. Some reports have even suggested the reason CNN has chosen not to expose HanAssholeSolo's real identity is a belief that his apology is sincere.

In reality, however, the "apology" from HanAssholeSolo was anything but. Instead, it's an attempt to dissuade people from concluding that the reason he says bigoted and hateful things, at length and with great enthusiasm, is that he is a bigoted and hateful person.

"I would also like to apologize for the posts made that were racist, bigoted, and anti-semitic," HanAssholeSolo wrote in the self-pitying non-apology. "I am in no way this kind of person, I love and accept people of all walks of life and have done so for my entire life. I am not the person that the media portrays me to be in real life, I was trolling and posting things to get a reaction from the subs on reddit and never meant any of the hateful things I said in those posts."

"The meme was created purely as satire, it was not meant to be a call to violence against CNN or any other news affiliation," he added. "It was a prank, nothing more."

In other words, like most other racist or sexist bullies on the internet who get called out for their bigotry, HanAssholeSolo is trying to play it off like he's only doing it for the lulz.

"I did it for the lulz" is a common refrain from trolls. The idea is that the troll is not inherently a racist, a sexist or a would-be fascist out to stir up hatred and violence, but is just pretending to be one in order to get a rise out of people. It's an all-purpose cover story for the cowardly bigots of the internet who want to spread vile ideas but don't want to take responsibility for doing so. It's high time the rest of us stop letting them get away with this excuse.

“If you’re trolling for the reactions," asked Stephanie Zvan, a writer and activist who works on feminist and pro-science issues, why would you bother with posting right-wing memes on right-wing Reddit forums? Who is possibly going to be angered and triggered by such things in that context?

If someone really wanted to get a rise out of the people on /TheDonald, which is a subreddit devoted to Trump fandom, Zvan continued, a better bet would be "going in there and talking about the pay gap or standing up for immigrants," instead of telling right-wing Redditors "everything they want to hear."

I called Zvan because of her long and gnarly history dealing with trolls. She is an atheist writer and talk-show host, and when she saw a dramatic rise in racist and sexist views within atheist circles of overt racism and sexism, Zvan took it upon herself to fight back. She quickly found herself the victim of organized harassment campaigns against her and other feminists engaged in atheist activism. After all that, she says, she became very skeptical of the "they're just doing it for attention" argument.

HanAssholeSolo may say that he's "not the person that the media portrays me to be in real life," but as Zvan put it, “He does not pull another person out of his pocket when he sits down at the computer. The person that he is online walks around with him all day."

By HanAssholeSolo's own admission, when he is in the real world — where there are consequences like social ostracism and job loss for those who advocate for hateful, racist views — he tamps that behavior down. And when there was a very real threat of being outed to the world as a bigot, he scrambled to deny that he had ever meant the things he said.

Not to get into philosophical weeds of what constitutes a person's true self, but generally speaking, most of us think the behavior one displays when unconstrained by consequences is a more authentic representation of the self than the behavior you display when bound by social convention.

The "just joking" excuse whipped out by HanAssholeSolo and roughly every other online creep who gets called out for saying something offensive is transparent nonsense. Yet somehow it works, time and time again. The idea that this person had offered a sincere apology was widely reported, and he was mostly given the benefit of the doubt by journalists.

When I asked why so many people are eager to believe these transparent excuses, Zvan suggested, "Your everyday person out there really just wants this all to go away without having to look at what it means."

People "don’t want to think about the fact that their friends and neighbors" might really believe all these vile things, she added.

Unfortunately, the stakes here go well beyond some anonymous troll on Reddit who takes advantage of people's unwillingness to accept that people really do believe the terrible things they say. After a hot-mike tape of Trump saying he likes to "grab them by the pussy" was released, the then-candidate dismissed his apparent confession of sexual assault as nothing but "locker-room talk."

President Trump, as virtually everyone knows, has a lengthy record of saying grotesque, racist and sexist things. Yet every time he does it, the media acts startled anew, as if they couldn't quite believe that he really meant it. This cycle has been repeated about once a week, if not more often, for the last two years, and yet Trump still benefits from people's unwillingness to believe he is really the bigoted jerk that he presents himself as on a regular basis.

Benefit of the doubt is a lovely thing, but it has its limits. That limit should have been hit two years ago, when Trump entered the presidential race by calling Mexican immigrants criminals and rapists. It's time to start taking right-wing bigots and would-be fascists at their word, instead of endlessly allowing them to pretend that their hateful rhetoric is all in fun.