Donald Trump, undisputed champ: Body-slamming his way to victory over the media and the "resistance"

Think Trump's attack on CNN made him look bad? Think again: He's a master marketer, and his fan base ate it up 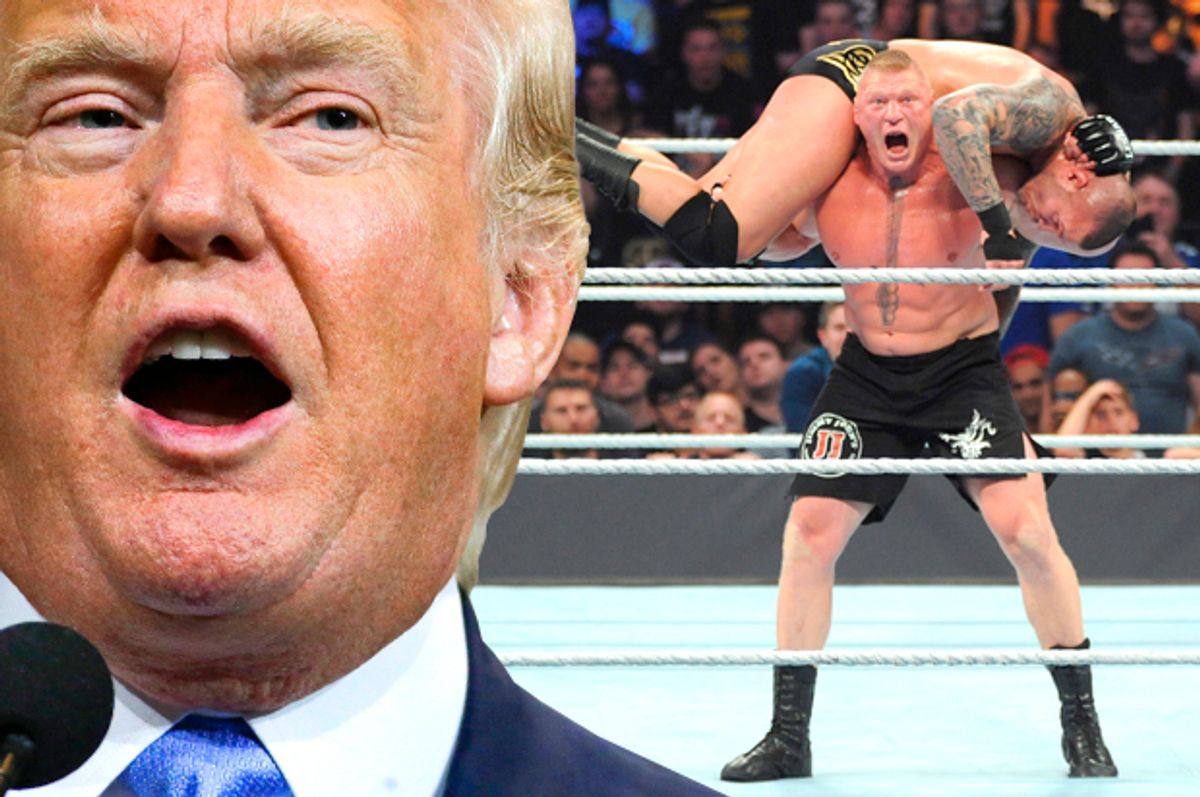 Donald Trump is the child who took a dump in the public pool — again. His voters and the Republican Party are still in the water, apparently delighted with the results. Much of the mainstream media stands poolside wringing its hands, feigning shock at something it has seen Trump do many times before.

Last Sunday, Donald Trump used Twitter to circulate a heavily edited video of him physically attacking "CNN." It was actually an altererd clip from a 2007's Wrestlemania event, at which Trump pretended to attack Vince McMahon, the WWE chairman and owner.

Trump's most recent use of Twitter to threaten his enemies at CNN with violence is part of a larger pattern. Last week, Trump also used Twitter to disparage MSNBC's  Joe Scarborough and Mika Brzezinski. Since the presidential election last November, Trump has continued to use social media to harass, insult, denigrate and browbeat his rivals. Trump also uses Twitter as one of his primary weapons in his fascist-style war on reality and truth. Predictably, his critics have responded with claims that Trump's use of Twitter and other social media are embarrassing and beneath the office of the presidency.

Yes, Trump is trolling the world on Twitter. But those Americans who are upset by Trump's boorish, ignorant and crude behavior have failed to accept a basic fact. They are not his audience — and the president's use of social media is a masterful continuation of the strategy he used to win the White House.

Trump is an expert at marketing. His brand's core value is that Trump is not "politically correct." As polling data and other research has repeatedly demonstrated, this message resonated with Trump's voters. It works because American conservatives view "political correctness" as a scolding, hectoring and oppressive threat to "free speech." In reality, the social or cultural tendency often called political correctness is but a request for a basic level of respect and politeness that acknowledges human dignity and the inherent value of a cosmopolitan and diverse society.

Such a notion offends conservatives because they want to be freed from any expectations of civility, and to be allowed or encouraged to act out their most impulsive feelings and thoughts without consequence. Such a desire is infantile. It is also very powerful for (white) conservatives if the targets of their abuse are people of color, women, LGBT people, immigrants, the differently abled, Muslims or any other group that they view as inferior.

Sociolinguists and other researchers have shown that Donald Trump communicates at or below a sixth-grade level, using emotional appeals in combination with repetition, lies and simplistic narratives (e.g., "fake news," "enemy of the American people," "Make America Great Again!").

This is a common strategy among today's Republicans and the right-wing media. For example, as far back as 1996, then-House Speaker Newt Gingrich outlined this approach in a memo to GOPAC, the state and local political training organization for Republicans that he founded:

As you know, one of the key points in the GOPAC tapes is that "language matters." In the video "We are a Majority," Language is listed as a key mechanism of control used by a majority party, along with Agenda, Rules, Attitude and Learning. As the tapes have been used in training sessions across the country and mailed to candidates we have heard a plaintive plea: "I wish I could speak like Newt."

That takes years of practice. But, we believe that you could have a significant impact on your campaign and the way you communicate if we help a little. That is why we have created this list of words and phrases.

This list is prepared so that you might have a directory of words to use in writing literature and mail, in preparing speeches, and in producing electronic media. The words and phrases are powerful. Read them. Memorize as many as possible. And remember that like any tool, these words will not help if they are not used ... The list is divided into two sections: Optimistic Positive Governing words and phrases to help describe your vision for the future of your community (your message) and Contrasting words to help you clearly define the policies and record of your opponent and the Democratic party.

The Republican Party, Fox News and the broader right-wing echo chamber have long used these strategies to manipulate their public. Twitter's limit of 140 characters per message is a perfect medium for Trump (and conservatives more generally) to follow through on Gingrich's guidelines.

Trump's bullying and aggressive behavior on Twitter resonates with his supporters in other ways as well. A focus group recently convened by the University of Virginia Center for Politics Project reveals that Trump's supporters see him as a "lion" or "tiger" who is "powerful," "unafraid" and a "protector." While some of Trump's supporters are concerned about how much time he spends on Twitter, those Trump voters who follow him on social media support his use of such technology to communicate with his base and attack his critics. One Trump supporter who participated in the focus group explained his strategy this way:

And while I don't like all his little tweets, when you sit back and you look at it, you realize he's trolling. He sends a lot of those out to send the media out on their little wild goose chases, and then he goes back and gets things done. There's a strategy to what he does. And that's the only reason I'm not, like, entirely unhappy with the tweeting part, because I can see where he's going with it. He just, he knows they'll run after something. Let them all chase down that little bunny rabbit trail, then I'm going to go this way, and I'll get things done.

Trump's efforts to delegitimate the news media and roll back the First Amendment are aided and abetted by the fact that his voters — and conservatives as a group — are extremely suspicious of the mainstream press and only trust what they hear from Fox News and other right-wing sources.

In an almost immediate response to Trump's wrestling video, a CNN spokesperson told The Hill that "it is a sad day when the president of the United States encourages violence against reporters."

The following Wednesday, CNN president Jeff Zucker told the New York Times that Trump was "trying to bully us, and we’re not going to let him intimidate us. You can’t lose your confidence and let that change the way you conduct yourselves." In the same story, the Times also reported that Trump's onslaught "has contributed to a foxhole-like mentality inside CNN’s offices, where security measures have been tightened and some hosts have considered abandoning their social media accounts because of abuse. Other employees, like Chris Cuomo, co-anchor of the morning show 'New Day,' insist that the scrutiny has only galvanized them further."

CNN's response to Donald Trump is further proof of the mainstream news media's inability to fully comprehend the political crisis embodied by his presidency — or their role in creating this disaster.

Donald Trump is a violent, emotionally abusive bully. His voters idolize and love him specifically because of that behavior. He is their hero. Trump's voters -- like today's Republicans en masse -- are authoritarians who exhibit high levels of social dominance behavior. As such, CNN's rebuttal to Trump is actually viewed as a sign of weakness, even an act of surrender. This encourages more abuse and contempt from the president and his supporters. When sharks smell blood in the water, it is best not to encourage their feeding frenzy.

Moreover, CNN is doubly compromised. While the network seeks to play the victim, it still keeps Trump surrogates on the payroll, thus allowing them a platform from which to pollute the public discourse with disinformation and outright lies.

Last Saturday, in a hip hop-like inspired turn of phrase, Trump responded to his critics by claiming victory and asserting that his communication tactics were "MODERN DAY PRESIDENTIAL" [sic]. On this point, the president is absolutely correct. In an unprecedented manner in recent American politics, Trump has played to the worst and most base impulses of white Americans to win the presidency. He is a performance artist and reality-TV host who is an expert at marketing and brand management. He cares nothing about the country as a whole except as a means of enriching himself. He created a political cult that obeys his every whim, and he knows that because of the Republican Party's voter suppression tactics in combination with Russian interference, he has a good chance of winning the presidential election again in 2020.

Instead of taking the bait and once again getting on the outrage treadmill, Trump's opponents should save their energy and focus on the horrible and cruel policies that he and the Republicans are hell-bent on inflicting upon the American people. Trump's tweets and his other wrestling-heel antics are just a distraction from the Republican master plan to destroy the cultural, political and social progress made in the United States during the 20th and 21st centuries in order to make the plutocrat class even richer and put black and brown people (and other despised minorities) "back in their place."