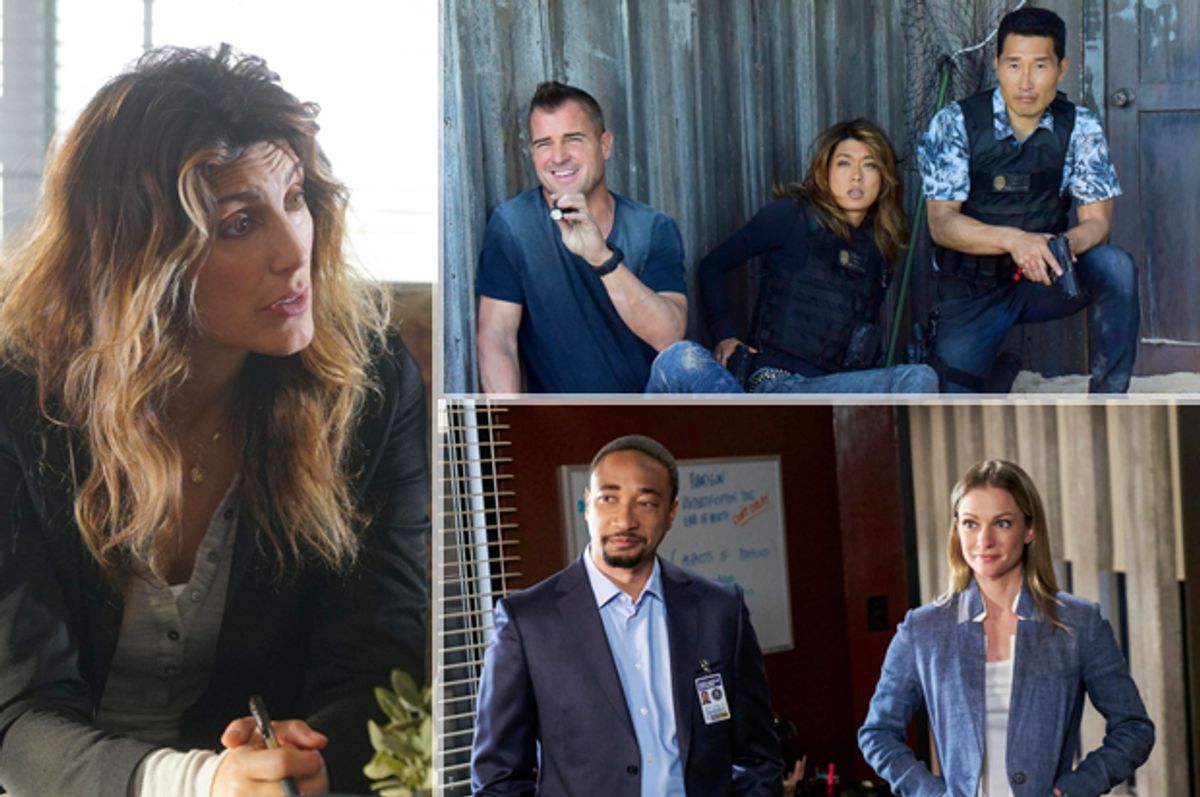 Even if you’re not a regular “Hawaii Five-0” viewer, last week’s reported departures of series regulars Daniel Dae Kim and Grace Park might have come as a shock. Kim and Park were part the CBS thriller’s core cast, and they’ve been with the show since its first season, occupying third and fourth billing behind Alex O’Loughlin and Scott Caan, who play updated versions of Steve McGarrett and Daniel “Danno” Williams.

Kim and Park also portrayed characters that originated in the 1968 series, Chin Ho Kelly and Kono Kalakaua respectively. But according to a Variety report, when lengthy negotiations with CBS Television Studios did not result in salary parity with O’Loughlin and Caan, Kim and Park decided it was time to leave the island.

“As sad as it feels to say goodbye, what I feel most is gratitude,” Kim wrote a heartfelt letter confirming the news, which posted on his Facebook fan page early Wednesday morning. “I am so deeply thankful to our crew, writers and everyone associated with the show – and especially the cast, who have been nothing but supportive through this entire process.”

Near the end of the note, Kim tacitly acknowledged that he did not arrive at his decision without some dispute. “I’ll end by saying that though transitions can be difficult, I encourage us all to look beyond the disappointment of this moment to the bigger picture,” he said. “The path to equality is rarely easy. But I hope you can be excited for the future.”

Any time a core member of a long-running series departs it's bound to make headlines. The combined exit of Kim and Park prior to the eighth season of "Hawaii Five-0" effectively decreases a small action ensemble to just two main players. Other series would be crippled by a similar egress.

Potentially of greater significance, however, is what the departure of two well-known Asian actors signals about CBS itself, especially considering that this story broke nearly 11 months after an L.A. Times report criticized CBS for having what was, at that time, the whitest fall schedule on broadcast.

Not long after that story ran, then-CBS Entertainment President Glenn Geller assured reporters assembled at an industry event in Los Angeles that a number of minority players in its series had been bumped up from recurring roles to series regulars. This came with an additional news that the network was hiring several actors of color to join established series.

Among those mentioned in the announcement were Wilmer Valderrama, Jennifer Esposito and Duane Henry, who joined “NCIS.” Boris Kodjoe became a series regular on “Code Black.” Nelsan Ellis was brought on a for a story arc on “Elementary,” and Geller pointed out Justin Hires’ co-starring role on the “MacGyver” reboot. Adam Rodriguez joined “Criminal Minds,” and Aisha Tyler, co-host of the daytime’s “The Talk,” became a series regular. In September, the show added Damon Gupton to the cast.

Nearly one year later, Ellis’ “Elementary” character Shinwell Johnson has been killed off. Esposito and Gupton each lasted but one season on their respective series. Kim’s and Park’s break with “Hawaii Five-0” was preceded by Masi Oka’s exit.

As for CBS’s 2017-2018 TV schedule, out of the six series debuting in the fall only one has a non-white lead: “S.W.A.T.” stars Shemar Moore. Its other new dramas, “SEAL Team” and “Wisdom of the Crowd,” feature co-stars of color. Neil Brown Jr. and Toni Trucks co-star in “SEAL” with David Boreanaz, and Richard T. Jones appears in “Wisdom” alongside its lead Jeremy Piven. Among its new comedies, Liza Lapira co-stars on “9JKL.” (None of CBS’s new series feature women in lead roles.)

The network might cite these developments as markers of progress, in addition to pointing out that its midseason addition “Superior Donuts,” which pairs Judd Hirsch with a black actor, Jermaine Fowler, was renewed for a second season despite poor ratings.

But CBS has been the most-watched broadcast network for nine consecutive seasons (and 14 years out of the last 15), and continues to cast series with white male leads while relegating women and minorities to supporting roles. When it responds to being lambasted for that formula by increasing its score from zero leads of color to one, clearly there’s still work to be done.

And the reported circumstances surrounding Kim’s and Park’s departure provide a cogent example of why relying on co-starring roles to fill out a network diversity roll just isn't good enough.

On Wednesday evening, CBS released this official statement: “Daniel and Grace have been important and valued members of Hawaii Five-0 for seven seasons. We did not want to lose them and tried very hard to keep them with offers for large and significant salary increases. While we could not reach an agreement, we part ways with tremendous respect for their talents on screen, as well as their roles as ambassadors for the show off screen, and with hopes to work with them again in the near future."

In addition to this on Thursday series executive producer and showrunner Peter Lenkov posted a statement on Twitter addressing the departures and the resulting outcry:

According to Variety, the network’s final offer to Kim and Park was estimated to have been 10-15 percent lower than O’Loughlin’s and Caan’s salaries. A follow-up in The Hollywood Reporter contends that Kim's raise would have come within 2 percent of his co-stars. (Kim and Park negotiated for raises separately.)

One argument made in several reports is that Kim and Park were co-stars, not leads, and it’s possible that the studio feared that bringing them up to parity could have inspired O’Loughlin and Caan to demand even bigger paydays.

But this obscures the fact that O’Loughlin and Caan also made deals to get points on the back end, meaning they’ll receive a cut of the profits “Hawaii Five-0” generates off-network.  According to Broadcasting & Cable, CBS Television Distribution sold the show’s second-run rights to TNT for more than $2 million an episode in 2011. As such, even if Kim and Park received the same per-episode paycheck, ostensibly they still wouldn’t secure the same longer-term benefits as their co-workers.

Caan also reportedly makes as much as O’Loughlin while appearing in five fewer episodes per year, while Kim has showed up in every episode since the revival’s first season. Sources with knowledge of the situation report that Park desired to scale back her episode commitment as well, which Lenkov confirmed in his statement. Park was unavailable for comment.

In the midst of this squall of coverage it may be easy to forget than when “Hawaii Five-0” was picked up for the 2010-2011 television season, O’Loughlin was another actor CBS was determined to make into a star regardless of the fact that he was the face of two failed series, “Moonlight” and “Three Rivers.” Scott Caan had a recurring role on “Entourage” and appeared in films, including the “Oceans 11” franchise, but beyond that was best known for being James Caan’s son.

At that time Kim had just wrapped production on “Lost” for which he had earned a loyal fanbase for his portrayal of Jin-Soo Kwon. Park, too, continues to enjoy a passionate following thanks to her role in Syfy’s successful “Battlestar Galactica” reboot.

There’s also the question of how this change stands to affect the cast’s chemistry. “Hawaii Five-0” is a top performer for CBS, finishing its 2016-2017 TV season averaging an audience of just under 9.25 million per week. Regardless of how central O’Loughlin’s and Caan’s onscreen partnership is to the storylines, the drama's dedicated viewers might not necessarily take to their former co-stars' yet-to-be-announced replacement after seven seasons.

Although “Hawaii Five-0” is the eighth most popular drama on television and reliably wins its Friday night timeslot, according to Nielsen ratings data it ranks in the 50s among 18- to-49-year-olds, the most attractive demographic to advertisers. Yet to be determined is number of viewers who may follow Chin Ho and Kono through the exit door.

In October 2016, CBS responded to its drubbing in the media by announcing a casting initiative with the goal of cultivating a diverse talent pool to feature in its prime-time lineup, whether in established series or pilots.

This initiative was launched in order to foster more culturally and ethnically inclusive casts in front of the camera and is part of CBS’s corporate diversity effort, which touts on its webpage, “Our goal is to impact the industry.”

Among the fall class “S.W.A.T.” is noteworthy in that it stars a black actor and the pilot was directed by Justin Lin, a Taiwanese American, and written by African American writer and producer Aaron Rahsaan Thomas. Thomas is expected to share showrunner duties with veteran executive producer Shawn Ryan.

That makes “S.W.A.T.” one of three fall network series run by writers who aren’t white. The other two are The CW’s “Black Lightning” and NBC’s “Champions.” Forward steps, yes, but small ones and certainly less than a multibillion dollar industry is capable of enacting.

Casting is another matter. Although the network has committed (somewhat) to diversifying the writing staffs for their series and expanding their hiring list of directors to include women and people of color, its casting offices are still entirely staffed by white employees, according to a source who did not want to be named.

Ultimately, the topmost network execs have the final say in casting decisions. That would have meant Geller this year, had he not been forced to go on medical leave in March. That left this season’s casting decisions in the hands of CBS Corp. Chief Executive Leslie Moonves and other senior players at the network.

Under Mooves’ aegis, CBS has become a network known for going to the same talent well over and over again. This is a key part of its strategy. Witness the success of “Bull,” fronted by Michael Weatherly, who became a fan favorite on “NCIS.”

And that familiarity stands to pay off in the international market, which also is of great import to CBS as a business. “NCIS” is the No. 1 show in the world, making Weatherly a recognizable face to global audiences. This is part of the reason CBS was able to license “Bull” to 200 markets in November 2016, only weeks into its first season.

Moore’s new series might prove to be appealing to overseas markets as well, since he previously starred in “Criminal Minds” and has been in the CBS family since he was in the cast of “The Young and The Restless.” (And despite the less-than-stellar performance of minority-fronted series such as “Empire” overseas, international audiences have been shown to embrace diversity in the context of stories that aren’t rooted in specific cultural experiences.)

But Moore is one of very few CBS co-leads of color who has been elevated to a central role over the years with the same level of promotion that Weatherly enjoyed in the run-up to his show’s debut last season. Actually, I cannot think of any actors of color who have gotten multiple opportunities to lead CBS shows after starring in failed series in the same way that O’Loughlin has (or, since we’re on the subject, Simon “The Mentalist” Baker did before him).

Kim and Park may have left the CBS fold, but they remain wanted nevertheless. Park is set to appear in a “Battlestar Galactica” reunion taking place at San Diego Comic-Con. Kim is an executive producer on the new ABC series “The Good Doctor.” In that capacity he’ll have some input on casting decisions at a network that has a black female head of entertainment, that features comedies starring Asian American and black casts, action series with Asian leads — one of which stars an Indian actress, Priyanka Chopra — and multiple series created by Shonda Rhimes.

If this is the bigger picture to which Kim is referring, there’s not much of a reason for him to look back — even if his situation is a shining example of why and how his former employers and the television industry at large really do need to do better.