CNN’s “The Nineties”: Empty nostalgia for a decade we should let die

CNN delves into a decade of pat neoliberalism and hollow spectacle and, unsurprisingly, comes up with nothing 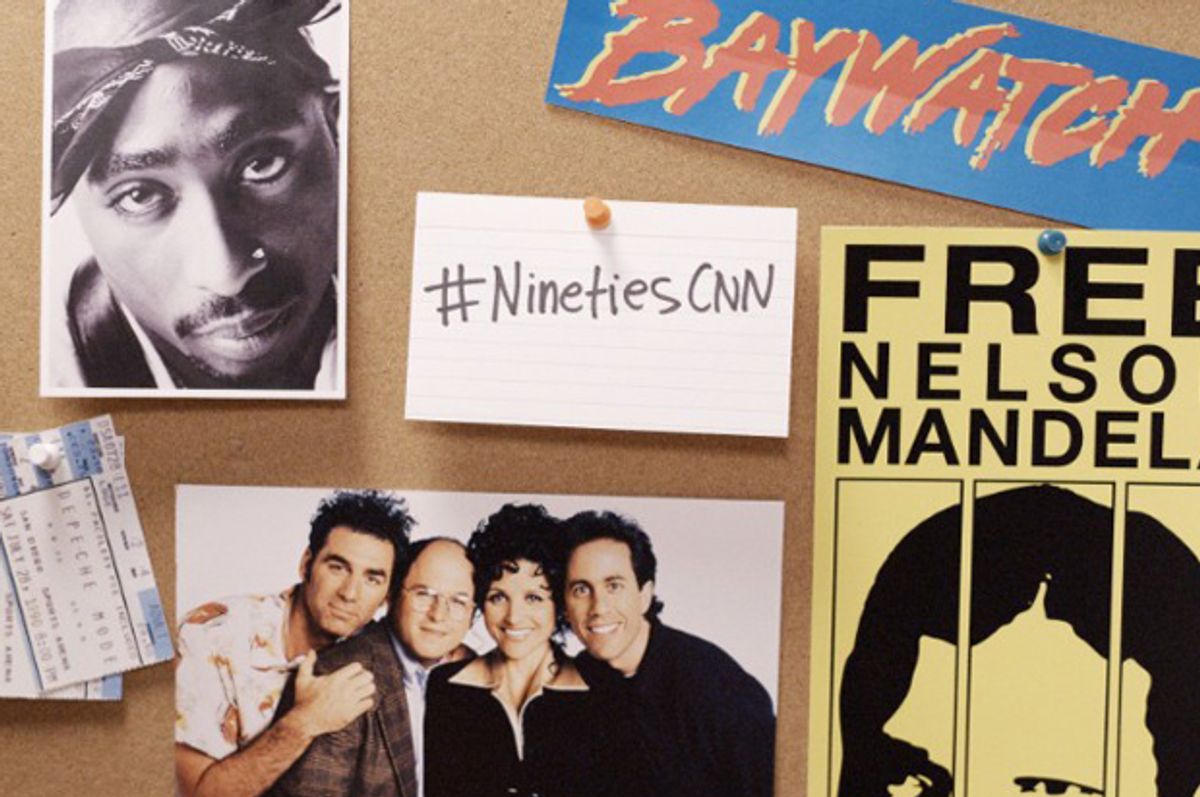 To anyone who came of age in the 1990s, the current cultural ascent of fidget spinners is likely to induce an acute pang of recognition — equal parts wistful nostalgia, anxiety and woozy terror. The ‘90s were, as any certified “Nineties Kid” can attest, a decade marked by a succession of asinine schoolyard fads.

One can imagine an alternative timeline of the decade that marks time not by year, but the chronology of crazes: the Year of the Beanie Baby, the Year of the Tamagotchi, the Years of the Snap-Bracelet, the Macarena, the Baggy Starter Jacket, the Painstakingly Layered “The Rachel” Hairdo, and so on. What’s most remarkable about our culture’s whirring fidget spinner fetish is that it didn’t happen sooner; that this peak fad didn’t emerge from among the long, rolling sierra of hollow amusements that defined the 1990s.

Surveying the current pop-culture landscape, one gets the sense that the ‘90s— with all its flash-in-the-pan fads and cooked-up crazes — never ended. On TV, “The Simpsons” endures into its 28th season, while David Lynch and Mark Frost’s oddball ABC drama “Twin Peaks” enjoys a highly successful, and artistically fruitful, premium-cable revival. The Power Rangers, Ninja Turtles, Transformers and Treasure Trolls have graduated from small-screen Saturday morning silliness to blockbuster entertainments.

Elsewhere, the “normcore”/“dadcore”/“lazycore” fashion of singers like Mac DeMarco has made it OK (even haute) to dress up like a “Home Improvement”-era Jonathan Taylor Thomas. And Nintendo recently announced its latest money-printing scheme, in the form of the forthcoming SNES Classic Mini: a handheld throwback video game platform chock-full of nostalgia-baiting Console Wars standbys like “Donkey Kong Country,” “F-Zero” and “StarFox.” Content mills like BuzzFeed, Upworthy and their ilk bolster their bottom line churning out lists and quizzes reminding you that, yes, the show “Rugrats” existed.

To quote a nostalgic ’97-vintage hit single, which was itself a throwback to ‘60s jazz-pop, it’s all just a little bit of history repeating.

It’s natural to languish for the past: to trip down memory lane, get all dewy-eyed about the past, pine for the purity of the long-trampled gardens of innocence, and go full Proust on the bric-a-brac of youth that manages to impress itself on the soft, still-maturing amber of the adolescent mind, even if that stuff was total crap like Moon Shoes or a Street Shark or Totally Hair Barbie doll or a bucket of Nickelodeon-brand goo called “Gak.” The 1990s, however, offered a particularly potent nostalgia trap, something revealed watching CNN’s new TV documentary miniseries “event,” fittingly called “The Nineties.”

A follow-up to CNN’s previous history-of-a-decade events (“The Sixties,” “The Seventies” and “The Eighties”) and co-produced by Tom Hanks, the series provides some valuable insight into the nature of '90s nostalgia. The two-part series opener, called “The One About TV,” threads the needle, examining the ways in which television of the era shifted the standards of cultural acceptability, be it in Andy Sipowicz’s expletive-laden racism, Homer Simpson’s casual stranglings of his misfit son or the highbrow, Noel Coward-in-primetime farces of “Frasier.”

What “The Nineties” misses — very deliberately, one imagines — is the guiding cynicism of such revolutions in television. Far from being powered by a kind of radical politics of inclusivity, TV was (and remains) guided by its ability to deliver certain demographics to advertisers. In the 1990s, these demographics splintered, becoming more specialized. Likewise, entertainment streams split. The bully "mean girls" watched “90210,” the bullied watched “My So-Called Life,” and the kids bullied by the bullied watched “Buffy the Vampire Slayer.” Then on Thursday night, everyone watched “Seinfeld.”

This parade of prime-time cultural revolutions betrayed the actual guiding political attitude of the decade: stasis. The second episode of “The Nineties” turns to the scandal-plagued political life of Bill Clinton. “A new season of American renewal has begun!” beams Clinton, thumb pressed characteristically over a loosely clenched fist, early in the episode. For the Democrats, Bill Clinton seemed like a new hope: charming, charismatic, hip, appearing in sunglasses on Arsenio to blow his saxophone. But like so many of TV’s mock-insurgencies, the Clinton presidency was a coup in terms of aesthetics, and little else.

“The Simpsons,” naturally, nailed this devil-you-know distinction in a 1996 Halloween episode, which saw the bodies of Bill Clinton and then-presidential rival Bob Dole inhabited by slithering extraterrestrials. Indistinguishable in terms of tone and policy, the body snatching alien candidates beguiled the easily duped electorate with nonsensical stump speeches about moving “forward, not backward; upward, not forward; and always twirling, twirling, twirling towards freedom.”

A 1992 book by the American political scientist Francis Fukuyama summed up the '90s’ neoliberal approach to politics. In “The End of History and the Last Man,” Fukuyama posited that the collapse of the Soviet Union following the Cold War had resolved any grand ideological and historical conflicts in world politics. Liberal democracy and capitalism had won the day. Free market democracy was humanity’s final form. History — or at least the concept of history as a process of sociological evolution and conflict between competing political systems — had run its course.

Following the publication of “The End of History," Fukuyama became an institutional poli-sci Svengali (John Gray at the New Statesman dubbed him the “court philosopher of global capitalism”), with his ideas holding significant major sway in political circles. The 1990s in America, and during the Clinton presidency, in particular, were a self-styled realization of the “end of history.” In the wake of the Cold War and collapse of the Berlin Wall, the president’s position was largely functionary: enable the smooth functioning of markets, and the free flow of capital. Such was the horizon of political thought.

Fukuyama’s book has been subjected to thorough criticism for its shortsightedness — not least of all for the way in which its central argument only serves to consolidate and naturalize the authority of the neoliberal elite. More concretely, 9/11 and its aftermath are often cited as signals of the “revenge of history,” which introduces new, complicated clashes of world-historical ideologies.

Though it’s often touted for its triumphalism, as a cheerleading handbook for the success of Westernized global capitalism, Fukuyama’s end of history theory is suffused with a certain melancholy. There’s one passage, often overlooked, which speaks to the general content and character of the '90s (and “The Nineties”). “The end of history will be a very sad times,” he writes. “In the post-historical period there will be neither art nor philosophy, just the perpetual caretaking of the museum of human history. I can feel in myself, and see in others around me, a powerful nostalgia for the time when history existed. Such nostalgia, in fact, will continue to fuel competition and conflict even in the post-historical world for some time to come.”

Our fresh new millennium has been marked, in political terms, by cultural clashes between decadent Western liberalism and militant Islamism (both sides bolstering their positions with the hollow rhetoric of religious zealotry), the abject failure of both the Democratic and Republican parties, the reappearance of white supremacist and ethno-nationalist thinking, the thorough criticism of neoliberalism, and the rise of a new progressive-left (signaled by the popularity of Jeremy Corbyn and Bernie Sanders), alongside a similarly invigorated form of moderatism referred to as “the extreme centre.” Amid such wild vicissitudes, the placid neoliberal creep of Fukuyama’s “post-history” feels downright quaint.

This is the sort of modern nostalgia that CNN’s “The Nineties” taps into: a melancholy for the relative stability of a decade that was meant to mark the end of history itself. Not only did things seem even-keeled, but everything (a haircut, a GameBoy game about tiny Japanese cartoon monsters, a sitcom episode about waiting for a table) seemed radical, revolutionary and, somehow, deeply profound. We are, perhaps invariably, prone to feeling elegiac for even the hollowness of A Decade About Nothing. It's particularly because the 1990s abide in our politicians, our ideologies, our prime-time entertainments, blockbusters movies and even, yes, in our faddish toys, designed to ease our fidgety anxiety about the muddled present, and keep us twirling, twirling back into memory of a simpler, stupider past.