Single-payer falls short in California, at least for now — and activists are pissed 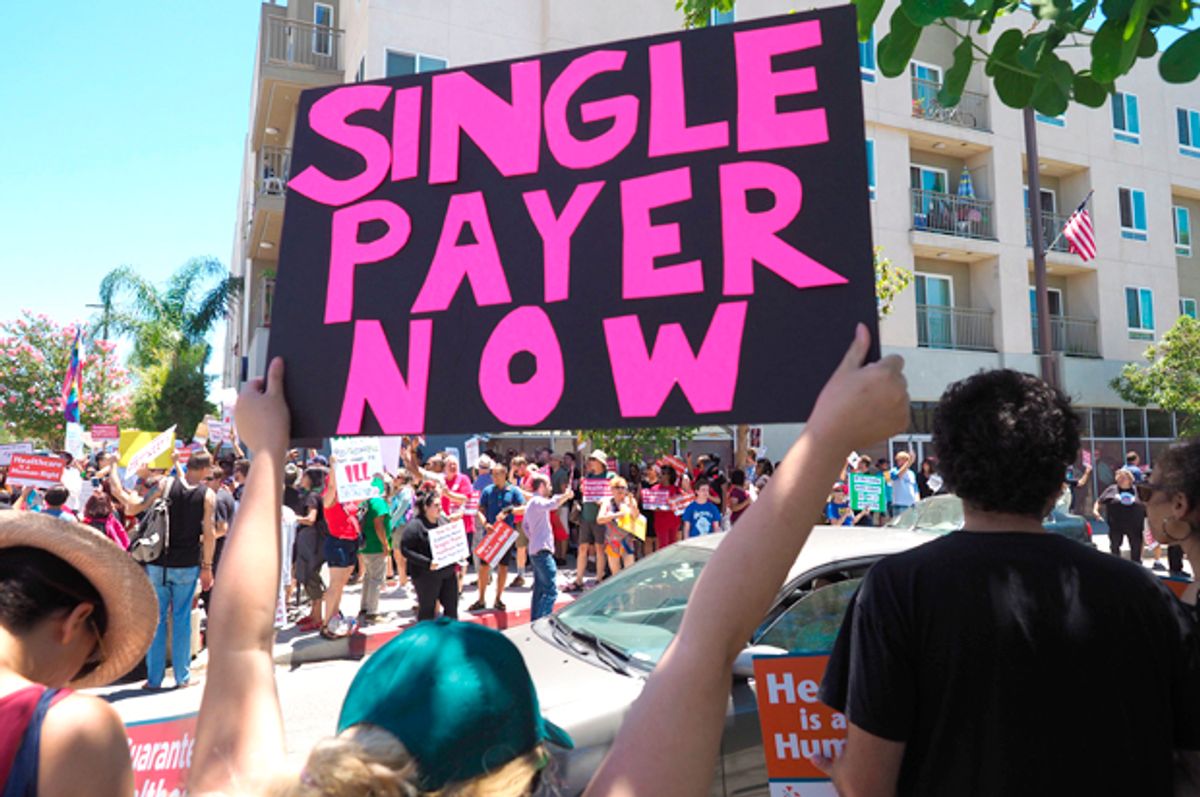 As the Republican effort to replace as much of the Affordable Care Act as possible appears to be going down in flames, a resurgent left within the Democratic Party is trying to resurrect a long-standing health care goal: universal coverage. But recent efforts at the state level keep on falling short, to the consternation of supporters.

In California, advocates of single-payer health care united behind SB 562, a measure that successfully made it through the State Senate but was prevented from going to a floor vote in the State Assembly by Speaker Anthony Rendon, a Democrat from the southeastern suburbs of Los Angeles.

Explaining his decision to temporarily stymie the Healthy California Act, Rendon called the bill “woefully incomplete” since the measure included no specific provisions for financing or provider payments. Saying that he has “long been a supporter of single payer,” the Assembly speaker referred the bill back to the State Senate, claiming that didn't mean the proposed law could not reach final passage during the current legislative session.

Democrats in the State Senate have pushed back against Rendon’s characterization of their bill, saying that while it indeed did not include all the components it would need to become a law, incomplete measures routinely pass both legislative houses along the way to final construction.

“None of the bills are ever cooked fully when the bills go to the other side,” an anonymous state senator told The Hill. “Rendon just didn’t want to deal with the difficulty of policy-making.”

The Assembly leader and his colleagues have received an outpouring of outrage after he announced his decision. The California Nurses Association, one of the largest backers of the bill, created a graphic featuring the state’s bear logo with a knife stuck in its back labeled “Rendon.”

Other supporters of the Healthy California Act went much further in their rhetoric: One person apparently made  a veiled death threat by invoking the recent shooting of Rep. Steve Scalise at a congressional baseball practice. “I pray someone checks [Rendon's] schedule for baseball practice,” a Twitter user wrote in a message that has since been erased.

Assembly Democrats swiftly denounced critics in a news release that urged Rendon’s critics to “not become the persons that we detest.”

“In recent days, we have become alarmed and disheartened by bullying tactics, threats of violence, and death threats by a few who disagree with the decision of Speaker Anthony Rendon to postpone the advancement of SB 562,” the Assembly Democratic Caucus statement continued. “While it is appropriate for persons of varying views to express concern, disapproval or disfavor about the delay, it is never acceptable to engage in those tactics.”

In an interview with Salon, Michael Lighty, the California Nurses Association’s policy director, said his organization had been assured by a Democratic official that the statement was not a reference to the union.

“I do think it's a very personal issue where people are feeling a high level of anxiety and desperation around health care,” he said.

Lighty also responded to critics of SB 562 who criticized the bill as too expensive after the Senate’s appropriations committee estimated that covering all Californians would cost around $400 billion a year, a number more than twice the size of the state’s total annual budget of roughly $180 billion.

That price tag is misleading, Lighty argued, because the Golden State already spends around $368 billion a year on health care, most of which comes from the federal government. Under current federal law, states receive matching funds for each dollar they spend through Medicare or Medicaid. Advocates of single-payer say that by eliminating the numerous layers of government and private bureaucracy and profit-taking that currently exist in California’s current private-public hybrid system, the state could save significant amounts of money.

The estimated cost of the bill could actually be even lower, according to a more comprehensive study conducted by Robert Pollin. the former economic adviser to California Gov. Jerry Brown. According to that research, which was partially funded by National Nurses United, moving to a publicly-financed system would cost about $331 billion annually, the entirety of which could be paid for by a 2.3 percent sales tax and a 2.3 percent business tax, both of which could include offsets for smaller businesses and low-income households.

“It's a very compelling argument when you're no longer having to pay for the profits in the bureaucracy and waste and inefficiency of the present setup and can contain prices,” Lighty said.

Of course, protecting the higher prices of the current system is of vital importance to the pharmaceutical and insurance companies who realize immense profits from it.

Assuming the Healthy California Act can get past several complicated and unique spending restrictions the state’s constitution places on legislation, the measure would still require the approval of the federal Health and Human Services Department. Under the administration of President Donald Trump, that's unlikely to be forthcoming

More than likely, that means single-payer advocates in California will have to wait until at least 2021. Even if that's the case, a universal health care bill passed by the nation's largest state is sure to be seen as a model and an inspiration across the country.