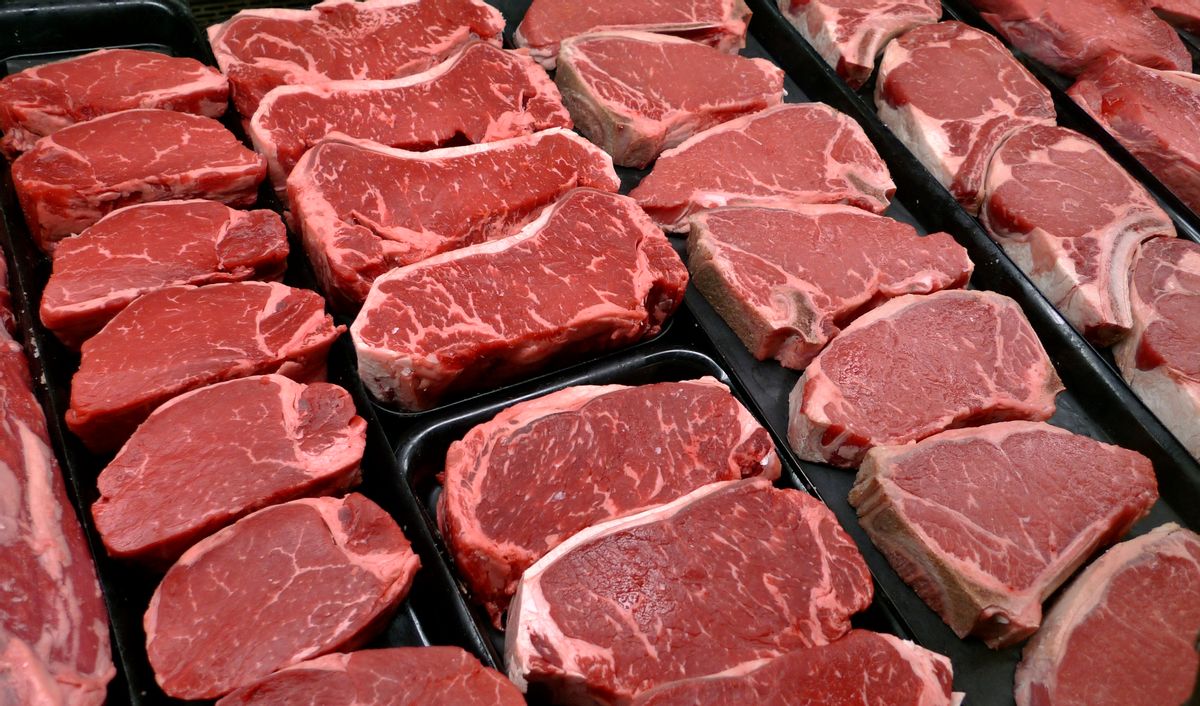 FILE - In this Jan. 18, 2010 file photo, steaks and other beef products are displayed for sale at a grocery store in McLean, Va. (AP Photo/J. Scott Applewhite, File)
--

Recently, Organic Consumers Association, along with Friends of the Earth and Center for Food Safety filed suit against chicken giant Sanderson Farms for falsely marketing its products as “100% Natural” even though it contains many unnatural and even prohibited substances. Sanderson chicken products tested positive for the antibiotic chloramphenical, banned in food animals, and amoxicillin, not approved for use in poultry production. Sanderson Farms products also tested positive for residues of steroids, hormones, anti-inflammatory drugs and even ketamine, a drug with hallucinogenic effects.

This is far from the first time unlabeled human drugs have been found in U.S. meat. The New York Times reported that most chicken feather-meal samples examined in one study contained Tylenol, one-third contained the antihistamine Benadryl, and samples from China actually contained Prozac. The FDA has caught hatcheries injecting antibiotics directly into chicken eggs. Tyson Foods was caught injecting eggs with the dangerous human antibiotic gentamicin.

The Natural Resources Defense Council has reported the presence of the potentially dangerous herbs fo-ti, lobelia, kava kava and black cohosh in the U.S. food supply as well as strong the antihistamine hydroxyzine. Most of the ingredients are from suppliers in China.

Because the activities of Animal Pharma are so underreported, few Americans realize that most of the meat they eat is banned in other industrialized countries. One example is ractopamine, a controversial growth-promoting asthma-like drug marketed as Optaflexx for cattle, Paylean for pigs, and Topmax for turkeys and banned in the European Union, China and more than 100 other countries. Also used in U.S. meat production is Zilmax, a Merck drug similar to ractopamine that the FDA linked to 285 cattle deaths during six years of administration. Seventy-five animals lost hooves, 94 developed pneumonia and 41 developed bloat in just two years, Reuters reported.

The European Union boycotts the U.S.' hormone-grown beef. The routinely used synthetic hormones zeranol, trenbolone acetate and melengestrol acetate pose "increased risks of breast cancer and prostate cancer," says the European Commission's Scientific Committee on Veterinary Measures. "Consumption of beef derived from Zeranol-implanted cattle may be a risk factor for breast cancer," according to an article in the journal Anticancer Research.

The European Union has also traditionally boycotted U.S. chickens because they are dipped in chlorine baths. In the U.S. it’s perfectly legal to ‘wash’ butchered chicken in strongly chlorinated water, according to a report in the Guardian:

These practices aren’t allowed in the EU, and the dominant European view has been that, far from reducing contamination, they could increase it because dirty abattoirs with sloppy standards would rely on it [chlorine] as a decontaminant rather than making sure their basic hygiene protocols were up to scratch.

Other germ-killing or germ-retarding chemicals routinely used in U.S. food production include nitrites and nitrates in processed meat (declared carcinogens by the World Health Organization in 2016), the parasiticide formalin legally used in shrimp production, and carbon monoxide to keep meat looking red in the grocery store no matter how old it really is. Many thought public revulsion at the ammonia puffs used to discourage E. Coli growth in the notorious beef-derived “pink slime” in 2012 forced the product into retirement. But the manufacturer is fighting back aggressively.

Antibiotics are the least of unlabeled animal drugs

According to the Center for Food Safety, Animal Pharma uses over 450 animal drugs, drug combinations and other feed additives “to promote growth of the animals and to suppress the negative effects that heavily-concentrated confinement has on farm animals.”

Last year I asked Michael Hansen, a senior staff scientist at Consumers Union, how the 2013 FDA guidance asking Pharma to voluntarily restrict livestock antibiotics by changing the approved uses language on labels was working out. Dr. Hansen told me “growth production” had been removed from labels but the drugs are still routinely used for the new indication of “disease prevention.”

But antibiotics are the least of the unlabeled drugs and chemicals lurking in meat. According to the Associated Press, U.S. chickens continue to be fed with inorganic arsenic to produce quicker weight gain with less food (the same reason antibiotics are given) despite some public outcry a few years ago. Arsenic is also given to turkeys, hogs and chickens for enhanced color. Such use “contribute[s] to arsenic exposure in the U.S. population,” says according to research in Environmental  Health Perspectives.

The appealing pink color of farmed salmon is also achieved with the chemicals astaxanthin and canthaxanthin. In the wild, salmon eat crustaceans and algae which make them pink; on farms they are an unappetizing and unmarketable gray.

There are legitimate reasons to use drugs, primarily to treat disease. Cattle host stomach-churning liver flukes, eyeworms, lungworms, stomach worms, thin-necked intestinal worms and whipworms, all of which are treated with parasiticides. Turkeys suffer from aspergillosis (brooder pneumonia), avian influenza, avian leucosis, histomoniasis, coccidiosis, coronavirus, erysipelas, typhoid, fowl cholera, mites, lice, herpes, clostridial dermatitis, cellulitis and more for which they are also treated with unlabeled drugs. (The Federal Register says the anti-coccidial drug halofuginone used in turkeys "is toxic to fish and aquatic life" and "an irritant to eyes and skin.” Users should take care to "Keep [it] out of lakes, ponds, and streams.") The endocrine disrupter Bisphenol A (BPA) has even been found in fresh turkey meat.

Food animals are also routinely given antifungal drugs and vaccines. Porcine epidemic diarrhea, which killed millions of animals in recent years, is treated with a vaccine. And a vaccine for the flock-killing bird flu is in the works. In fact, Big Food is working with Big Pharma to replace the widely assailed antibiotics with vaccines.

Drug use in food animals will get worse, not better

There are two reasons drug residues in food animals will soon grow worse not better. In exchange for China agreeing to accept U.S. beef after a long hiatus, the U.S. agreed to import cooked chickens from China. China’s food safety record is abysmal including rat meat sold as lamb, gutter oil sold as cooking oil, baby formula contaminated with melamine and frequent bird flu epidemics. Globalization dangers already exist with seafood, most of which comes from countries that use chemicals and drugs banned in the U.S.

The second reason is the U.S. meat industry’s increasing move toward privatization and corporate self-policing — phasing out U.S. meat inspectors in favor of the “honor system.” USDA’s “New Poultry Inspection System” (NPIS) shamelessly allows poultry producers to switch to a voluntary program that allows for non-government poultry inspections. Such privatization deals are the wave of the future as federal meat inspectors are ignored and phased out by the government.

After all, we are living with an administration that sees regulations as nothing more than an impediment to Big Ag’s cheap meat agenda.