Consider the upside, liberals: If Trump can achieve a new détente with Russia, that's a good thing

Whatever happened during the campaign, we're stuck with these guys. It's a lot better if they don't go to war 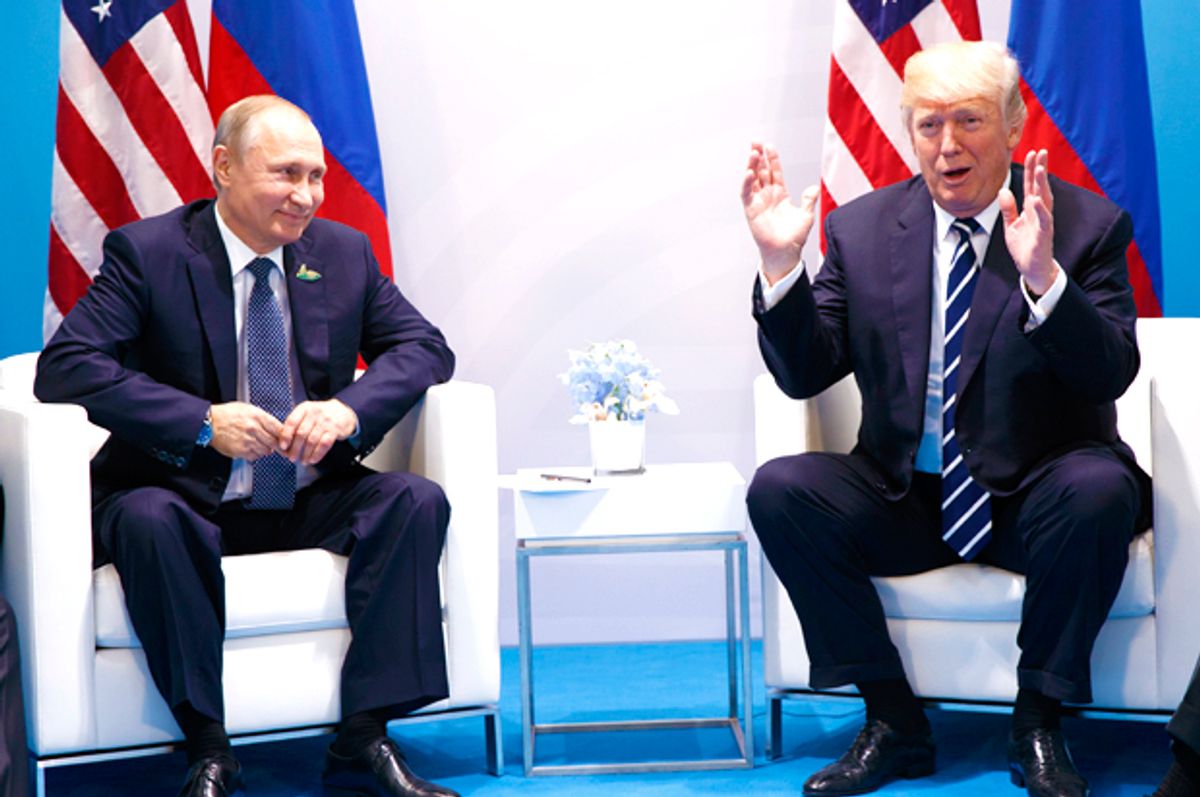 The long-awaited inaugural tête-à-tête between President Donald Trump and Russian President Vladimir Putin is finally in our rearview mirrors.

While us mere plebeians are not privy to the intimate details of such meetings, we do know a few things about how it all went down; We know the two men got along well in person — with Melania Trump reportedly being sent into the meeting to ask the men to wrap things up. We also know, thanks to Putin’s comments afterwards, that the Trump we see on TV is allegedly “very much different” from the real-life version, which I think many would agree could only be an improvement.

Then there’s the more tangible results; a new ceasefire in Syria and a “de-escalation” agreement for the southwestern region of that country. Trump has also appointed a new envoy to lead U.S. diplomatic efforts on the Ukraine crisis.

As for Russian involvement in the 2016 presidential election, Trump appears to have taken Putin’s word that Moscow did not meddle in the election. That's hardly surprising. Trump would achieve little from pushing that line of inquiry much further with Putin.

Whatever one’s take on that, Russian influence and Trump’s own alleged ties to the Kremlin are being duly investigated. But life goes on outside of that political bubble. There is no point in looking at the Trump administration’s relationship with Russia in a vacuum. There are more important things at stake in the world than a ham-handed effort to achieve revenge for Hillary Clinton's defeat, at the expense of everything else.

Finding a lasting deal for peace in war-torn Syria is one of them. Ending the frozen conflict in Ukraine is another. To that end, it should be seen as a positive thing that the leaders of two nuclear powers have established a personal chemistry and some level of respect for each other. Not so much in liberal-land, where it looks as though some would rather bring the United States and Russia to the brink of nuclear war than admit that Clinton lost the election on her own steam.

The cohort busily tweeting about how scary it is that Trump and Putin developed a rapport during their first meeting don’t seem to have any appreciation for how much scarier things could get if the two men failed to get along. Because the way things have been going, the relationship between Moscow and Washington can’t afford to get any worse. But even with one positive meeting under their belts, there’s no guarantee things will change in any substantial way.

That's because both sides are looking for concessions from the other which are unlikely to ever be made. Russia, for example, wants the American missile defense system, which it regards as a threat to its own nuclear deterrent, out of Poland and Romania. It wants a written commitment that countries like Ukraine and Georgia will never be admitted to NATO. It wants NATO troops pulled back from its borders. It wants the U.S. to respect what Moscow regards as its sphere of influence in the world. It also wants the Crimean peninsula recognized as part of Russia and eventually to have sanctions lifted — although recognizing Crimea and lifting sanctions are lower priority than the rest.

If it were up to Trump alone, he might be willing to make some prudent concessions here. For example, Trump is unlikely to care whether Ukraine and Georgia are in NATO or not (he has said as much before) — and therefore would likely be happy to capitulate, given the importance Moscow places on this. Trump also doesn’t care personally about the status of Crimea. During the presidential campaign he called the Crimea issue “Europe’s problem.”

It would be no skin off America’s nose to offer some kind of mutually beneficial compromise to Moscow on either of these issues. It would not, as many have suggested, encourage Putin to embark on a murderous (and suicidal) rampage across Europe’s NATO states in search of lost glory. It might, however, go a long way toward building some much-needed trust that could then be transferred to more pressing issues, like Syria.

The problem is, the neocons in both parties tend to maintain most control over the debate on foreign policy — and they don’t do concessions. Especially to Russia. To them, diplomacy doesn’t mean negotiation and compromise, it means ensuring that the other party doesn’t get a single thing they want. The pressure for Trump to stand up to Putin, even on issues of no material importance to U.S. national security, is so great that it will be near impossible for him to make any of these compromises.

It would take some political courage for Trump to forge ahead in search of a much-needed détente with Russia, given the domestic political climate. Whether he has that courage or not remains to be seen. His deep desire to be liked and loved by all could get in the way. Not to mention the fact that his opinions on Russia, Ukraine, Crimea, NATO and Syria have not been set in stone. Historically, they’ve changed like the wind — which means they could change again, depending on who has his ear at any given moment.

Those on the left and right who are in favor of a détente are not delusional or naive. Nobody is advocating a session of "Kumbaya" around the campfire with Vladimir Putin. The United States and Russia will remain geopolitical adversaries, wary of each other for good reasons. As I’ve written before, there are simply too many areas where Moscow and Washington’s priorities collide. But that doesn’t mean the two countries can’t or shouldn’t get along where they share common goals.

It is baffling, with so much at stake, the extent to which many on the left, backed by the media, are rooting for the relationship to fail miserably. They may abhor Putin and all he stands for. But none of that changes the basic truth that it’s better for everyone — except maybe arms manufacturers — if the U.S. and Russia can get along.