In “The Bold Type,” fluffy female empowerment is always in fashion 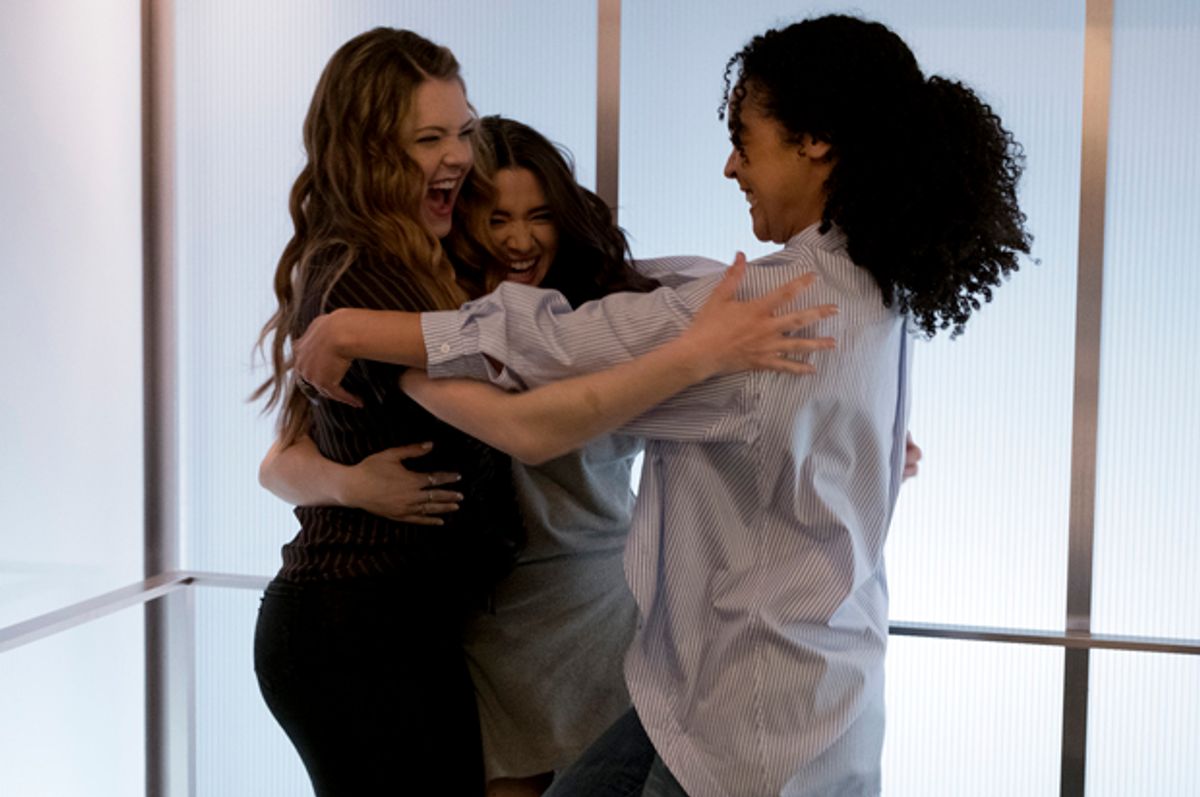 Scarlet, the fictional fashion glossy at the heart of Freeform’s new series “The Bold Type,” might best be described as Teen Vogue in the streets and Cosmopolitan in the sheets. While it’s placing a stronger emphasis on political reporting, a cover seen in the new drama’s premiere episode, airing Tuesday at 9 p.m., exhorts its readers to “Sweat away stress: Get happy and healthy” and “Do What You Love, Score a Fat Paycheck #jobgoals” and “KICK MORE ASS! At work, at the gym, in bed.”

The magazine’s editor Jacqueline Carlyle (Melora Hardin) wants her periodical to sell fashion and empowerment in the same book. In a rousing speech at a champagne-and-canapes event she tells them that Scarlet’s message is, “Here’s a fabulous pair of jeans, now go climb a mountain!”

In another scene its social media coordinator Kat Edison (Aisha Dee) tells to a subject wary of being featured in the magazine that Scarlet represents “stealth feminism.”

For a certain type of viewer tempted to judge a show by its cover, “The Bold Type” may make your eyes roll right out of your head minutes into the pilot. And that’s bound to happen even if you aren’t aware of the show’s pedigree: the series is inspired by the purported office environment of Cosmopolitan and its former editor-in-chief Joanna Coles.

That explains why the series hikes through that strange territory where objectification and empowerment meet and are rebranded as modern feminism. The opening episodes take pains to establish its characters as confident sexual beings who want to be wanted, professionally speaking and personally.

Jane Sloan, a recently promoted staff writer (Katie Stevens), wants to follow in the footsteps of Joan Didion and Nora Ephron and be taken seriously as a journalist. Her passion is for political writing, and she’s a firm believer that Cosmo, er, Scarlet can stake its claim on that front. “Even if we’re fluff, we’re fluff with a huge millennial voter readership,” she declares.

Before she can give the Washington Post something to fear, Jane is tasked to write a sex column even though she’s never had an orgasm — because that is what sells ads. Sutton Brady (Meghann Fahy) is an office assistant who wants to climb the ranks just like Jane but takes the risk of sleeping with an older superior in the company’s legal department (Sam Page).

Then there's Kat, a tech-savvy millennial and concept generator who isn’t afraid to be brash and push back when her bosses want to dismiss an idea. They support one another’s career ambitions and inspire each other to take risks and shag who they want without apology. They've Cosmo-style feminism in action.

“The Bold Type” works overtime to fit a niche that hasn’t adequately been filled since “Sex and the City” left the air — that is, it’s a show about young, driven professional women doing everything they can to make their mark and have it all in the big city. (And no, The CW’s “The Carrie Diaries” doesn’t count.)

Accordingly, “The Bold Type” hawks the fantasy of haute fashion that defies the reality of the average 20-something’s lifestyle. All of the principal characters wear shoes with red soles and carry expensive bags, have fabulous affairs and generally get everything they want.

To the question of which of these women is the Carrie, or the Samantha, or the Miranda, or the Charlotte, it answers that each gets to be a bit of all of them. Because isn’t that the promise that young women were raised to believe in?

“The Bold Type” launches with the airing of two episodes in succession, which is enough to give the audience a taste of the subplots driving this first season and, no doubt, to inspire a number of think-pieces and a few take-downs on feminist blogs and culture sites.

That said, it's also a curious example of a series trying employ its fictional publication’s ethos in its own execution. For instance, the premiere features a subplot about a Muslim photographer who chooses to wear a hijab and is an out and proud lesbian, and this is the first of several recurrences for the character. There are far worse directions that a millennial-targeted series about a magazine could be taking than presenting characters from other cultures that defy common misperceptions of ethnicities as monoliths.

Subsequent episodes touch on immigration issues and include a story inspired by Gamergate, in which one of the characters deals with trolls who doxx her and flood her Twitter feed with rape threats. Without specifically making the show about the risks female journalists face on social media in our politically fractious environment — or, in that regard, about the important role journalism can play in the unlikeliest of places — “The Bold Type” deserves credit for surfacing the dialogue about these issues.

The series’ showrunner Sarah Watson (previously a co-executive producer on “Parenthood”) also deserves credit for refusing to play into the pop culture trope of the harridan boss or backstabbing female superiors. Even before “The Devil Wears Prada,” women in magazine editorial offices were imagined to be ice queens popped from the same tray that birthed the Anna Wintours of the world. Many are depicted as being envious of youth and bent on making the lives of up-and-coming writers into a living Hell. And the female subordinates who survive these bosses become joyless rivals or compliant punching bags.

For viewers closer in age to Hardin’s Jacqueline Carlyle, her version of a woman in charge is a refreshing subversion of this damaging archetype. The younger characters are the stars of the show, but Hardin’s Jacqueline is a nurturing force who pushes her employees to do their better as opposed to whipping them. And it’s under her leadership, and Watson’s careful shaping the story, that Scarlet thrives on support and collaboration as opposed to rivalry.

The charm of “The Bold Type” is in the way it illustrates the role that these magazines play in the modern woman’s life, for better or worse. Early on Jane observes that when she was growing up, Scarlet fulfilled the role of giving the kind advice she might get from an older sister she wishes she’d had. Magazines like this serve that role to young women even now, which can be as detrimental as it is empowering.  But like this series, they do a tremendous job at selling dreams alongside liberating ideas and information. The question is which part readers and viewers value more. Perhaps as "The Bold Type" evolves, it will provide additional interesting and no doubt frustrating answers.