President Trump: This way to the exits

Less than six months into his presidency, it's clear that our chief executive is unfit for office 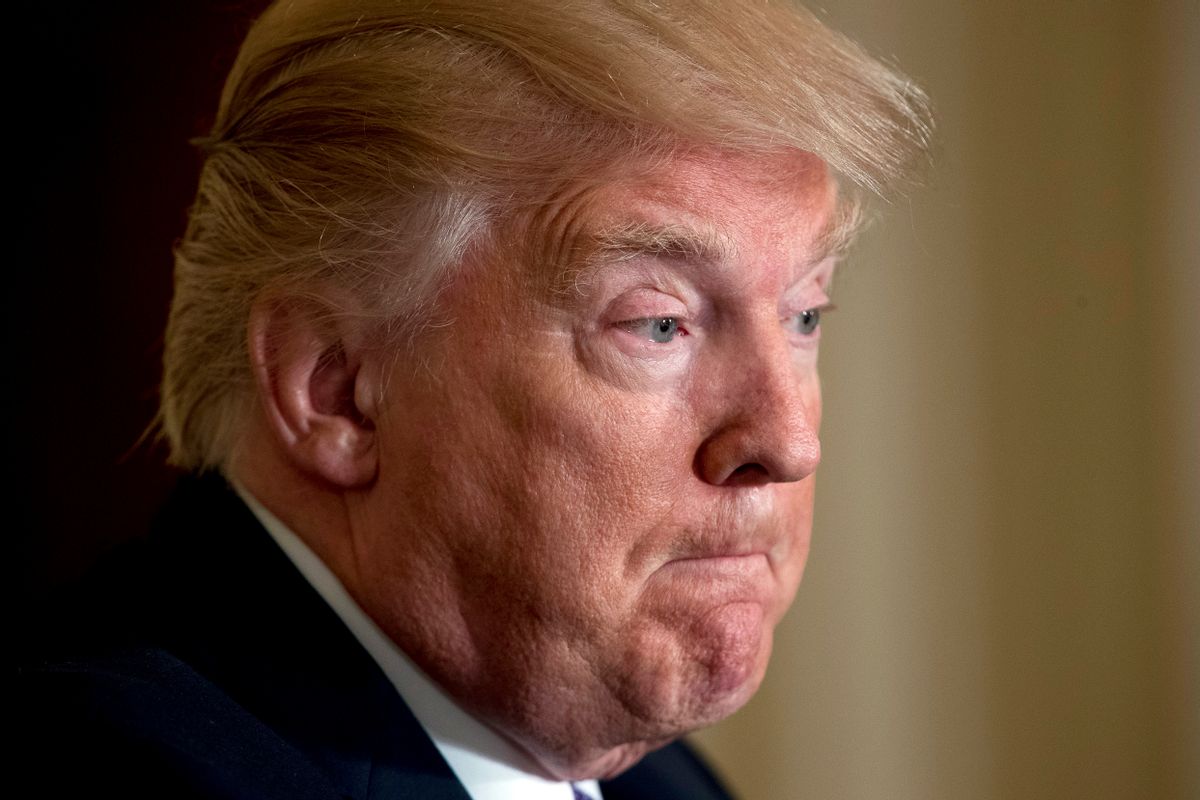 A tune was running through my head all this past Fourth of July weekend, and it wasn’t “I’m a Yankee Doodle Dandy.” No, the earworm that afflicted me was the opening number from the 1980 musical "Barnum", a Broadway extravaganza that glorified the master showman and consummate humbug P.T. Barnum, born July 5, 1810. The song begins like this:

“There is a sucker born every minute
Each time the second hand sweeps to the top
Like dandelions up they pop,
Their ears so big, their eyes so wide.
And though I feed ‘em bona fide baloney
With no truth in it
Why you can bet I’ll find some rube to buy my corn.
‘Cause there’s a sure-as-shooting sucker born a minute,
And I’m referrin’ to the minute you were born.”

All these years later, that show, with music by Cy Coleman and lyrics by Michael Stewart, is long overdue for a revival, although it easily can be argued that there’s no need — P.T. Barnum is alive and well and living in the White House.

Donald Trump is the con man huckster of all time, and in his sway are the many descendants of those suckers who back in the day provided a steady livelihood for good old P.T.

There are huge differences, of course, the biggest being that in the musical at least, Barnum is portrayed as a lovable, charming rascal. And he’s not a bully, unlike the current ringmaster of our national Big Top.

But the similarities are there for sure — each man endeavoring to create sideshows that fool both the public and the media with clever tricks that distract the eye. Barnum did it for fun and profit; Trump out of malice, a desperate need for attention and most important to the country, the desire to divert attention from the fact that in less than six months his administration has flamed out in many spectacular ways, while at the same time effectively wrought havoc with representative democracy and government.

Subverting rules and regulations, upending international agreements and offending other countries while backslapping right-wing nationalists, sending the justice system hurtling back toward the 19th century, enabling the very rich (including himself) to get much, much richer and the poor to fall through the safety net (the Trumpcare debacle) — what we’ve seen in such a short time is a brutish, conscious effort to subvert the inalienable rights both guaranteed and implied by the Declaration of Independence and the Constitution.

That Trump so often chooses to do his dirty work via Twitter of all things, bastardizing policy, trivializing and reducing the most important issues to 140 characters while hurling the grossest and most peculiar insults at those who dare call foul is somehow emblematic of his already sordid and petty tenure.

(By the way, if you would seek the latest instance of projection coupled with a stunning lack of self-awareness, I give you the president’s recent tweet attacking North Korean dictator Kim Jong Un’s latest missile test with the query, “Does this guy have anything better to do with his life?” Try multitasking, Mr. President: Look in the mirror as your thumbs fly across the keyboard, and ask yourself the same question.)

But it is not just by his tweets that you shall know him. David Rothkopf, a visiting professor at Columbia and visiting scholar at the Carnegie Endowment for International Peace, recently moderated a panel at the Aspen Ideas Festival and wound up suggesting, in his words, “that it may be that Trump’s fitness to serve as president is our nation’s core national security issue.”

In The Washington Post, citing Trump’s lack of impulse control, flip-flopping, reluctance to fill key positions (fewer appointments so far than his four predecessors) and “his resistance to doing the work needed to be president,” Rothkopf writes:

“The United States has had a wide variety of presidents; we have as often been victimized by their errors of judgment as we have benefited from their leadership. But the stark reality is that objective analysis reveals that we have never before seen a president so unfit for office. Even President Richard Nixon at his moments of darkest paranoia was a professional public servant who understood the office and the stakes associated with it. One might, on this Independence Day week, have to go back to King George III to find a head of state who so threatened America. But there is no precedent for one whose character is so obviously ill-suited to the presidency.”

Last week, at Washington Monthly’s Political Animal blog, Martin Longman noted that the consequences of Trump’s ineptitude already are beginning to pile up:

“Trump will lash out in ever more confusing and bizarre ways,” Longan predicts. “And then the indictments and plea deals will start to flow in from Special Counsel Bob Mueller’s shop. By Thanksgiving, if not before, the nation will be confronted with the urgent need to remove Trump from power and I suspect there will be more consensus about it by then than most people can imagine right now.”

Back when P.T Barnum displayed his many wonders to the millions who visited his American Museum in New York City — everything and everyone from tiny General Tom Thumb to the bogus Fiji Mermaid (a monkey’s head and torso stitched to the tail of a fish) — he noticed that many ticket holders, each of whom had paid a quarter apiece, were spending far too much time loitering and gawking at the exhibits. So he had signs posted that read, “This way to the egress.” Thinking they were going to see yet another of Barnum’s curiosities, sightseers followed the signs and were startled to find themselves out on the street.

It seems clear, Donald Trump, even this early in your presidency, that it’s time for you to follow P.T. Barnum’s instructions and make your way to the egress. Whether you will or not is uncertain. Will this Congress ever see fit to begin impeachment proceedings or will your vice president and cabinet invoke the 25thAmendment or will we have to wait to see if the electorate tosses you out in 2020?

The need transcends party, yet partisan dysfunction may prevent the proper course being taken immediately, but leave you must. Don’t let the door hit you on the way out.