Surprise! The Emmy nominations (kind of) got it right for 2017

It's "Handmaid's" vs. "Westworld" and Martha & Snoop vs. RuPaul — The Emmys are going to be interesting this year 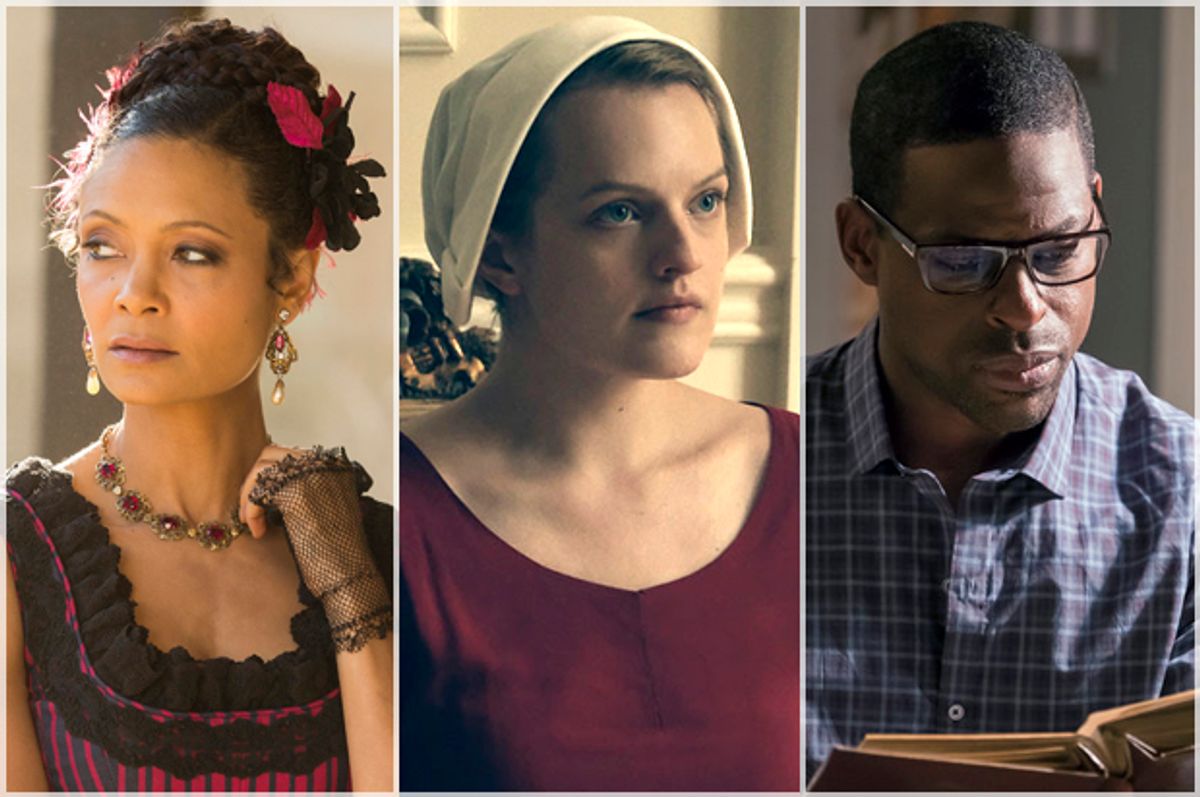 Thandie Newton in "Westworld," Elisabeth Moss in "The Handmaid's Tale," Sterling K. Brown in "This Is Us" (HBO/Netflix/NBC)
--

At long last, Academy of Television Arts and Sciences voters gave us a slate of Emmy nominations that could make even the most dispassionate of award show viewers sit up and take notice.

You love "Stranger Things," right? It got a nod. Not only that, Shannon Purser — Barb! — received a nomination. Emmy night also stands to be an exciting one for "This Is Us" viewers. On Thursday morning, when the nominations for the 69th annual Emmy Awards were revealed Los Angeles by Anna Chlumsky of "Veep" and "S.W.A.T." star Shemar Moore, the series became first broadcast drama to appear in the Outstanding Drama Series category since “The Good Wife”  slid into that race in 2011.

The list included the usual suspects, because it always does, with Chlumsky's HBO series and ABC's "Modern Family" in the top comedy category, "House of Cards" for top drama (why?) and Ryan Murphy's flooding of the miniseries field with a bevy of nods for "Feud: Bette and Joan." “Westworld” and “Saturday Night Live” received the most nominations out of all the contenders, scoring 22 each.

Despite this, the fact that voters gave nods to deserving series that captured the zeitgeist such "Stranger Things" and "The Handmaid's Tale" deserves applause. "Handmaid's" netted Hulu first-time nominations in several top categories, including Outstanding Drama and a Lead Actress in a Drama Series nod for Elisabeth Moss.

It was also a fine morning for comedy series and hosts who have won over audiences by thumbing their noses at the Trump administration. "Saturday Night Live" received more nominations in a single year than it has in its 42-year history. In the Variety Talk category, "Full Frontal with Samantha Bee," "The Late Show with Stephen Colbert" and "Jimmy Kimmel Live!" all received nominations. Notably, "The Tonight Show Starring Jimmy Fallon" did not. (Neither did "The Daily Show," for that matter.)

If you're wondering where all the "Game of Thrones" nominations went, this is the cost of its late start in 2017. HBO is well represented nevertheless thanks to "Westworld," "Veep," "Silicon Valley" and its miniseries "Big Little Lies" and "The Night Of." One noticeable snub in the top drama category — to critics, anyway — is the failure to cite the final season of "The Leftovers."

Having said that, Ann Dowd scored one of her two nominations for the HBO drama, the second being for "Handmaid's." Carrie Coon, who starred in "The Leftovers" and "Fargo" at the same time, received a nod for her work in the FX series.

But among the individual nods, no category may be more entertaining this year than the race for Outstanding Reality Host, which pits Heidi Klum and Tim Gunn against W.Kamau Bell, Gordon Ramsay, Alec Baldwin (who also received a nomination for his work on "Saturday Night Live"), RuPaul and,  yes, Martha Stewart and Snoop Dogg.

The 69th annual Emmy Awards will be hosted by Stephen Colbert and airs live from Microsoft Theater in Los Angeles on Sunday, September 17 on CBS.

Outstanding Lead Actor in a Limited Series or a Movie

Outstanding Lead Actress in a Limited Series or a Movie

Outstanding Supporting Actor in a Limited Series or a Movie