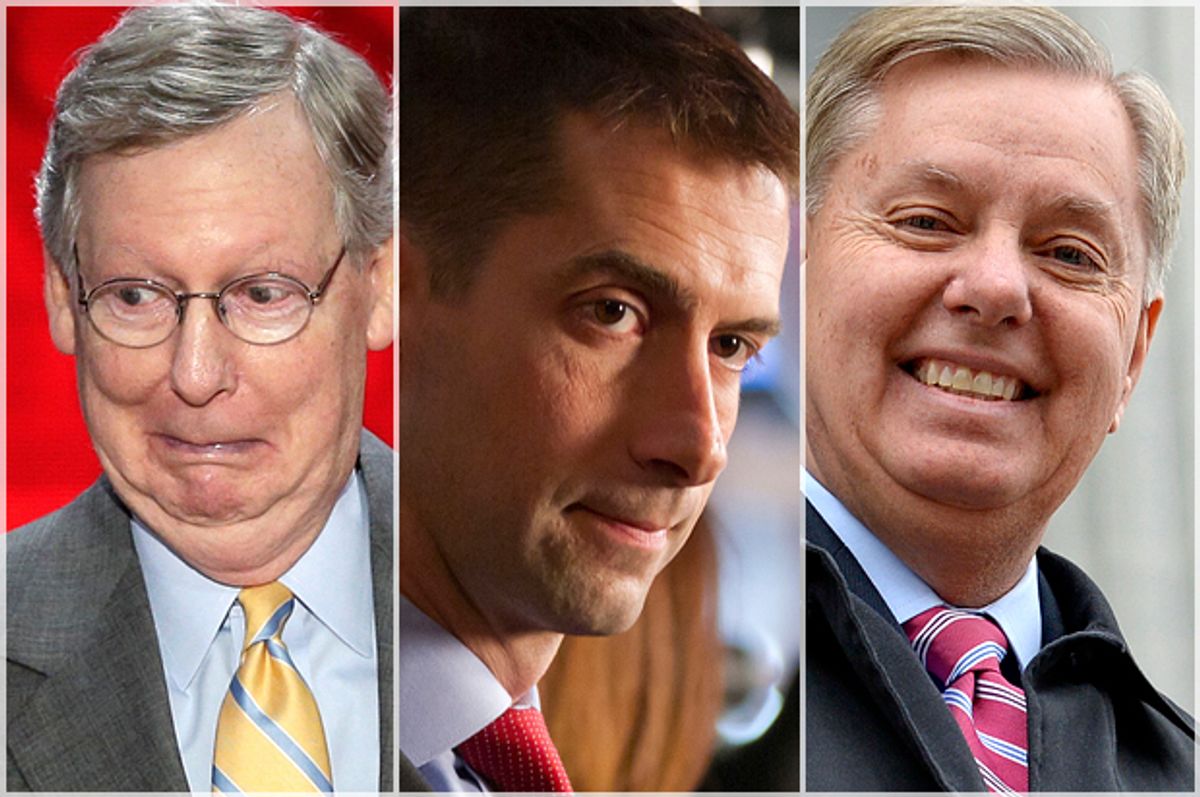 Senate Majority Leader Mitch McConnell, R-Ky., is desperately scrambling to get the Republican health care bill through the Senate — which is why he delayed the start of his chamber's August congressional recess by two weeks, is prepared to release a second version of the bill on Thursday and warned his GOP colleagues to finally play ball.

"I'm sure members will have other good ideas ... and I hope they will offer them. ... But if the Senate is prevented from even proceeding to the bill, none of us will have an opportunity — not Republicans, not Democrats, not anyone," McConnell said from the Senate floor on Wednesday.

The day before, McConnell announced a delayed recess for the Senate, citing an "unprecedented level of obstruction" on the GOP's plan to repeal and replace the Affordable Care Act.

"In order to provide more time to complete action on important legislative items and process nominees that have been stalled by a lack of cooperation from our friends across the aisle, the Senate will delay the start of the August recess until the third week of August," McConnell said in a statement.

This is the first time the August recess has been postponed since 1994, NBC reported.

After drafting a health care bill in complete secrecy that has been ridiculed and called "dead" by other Senate Republicans, McConnell has so far spent the summer scrambling for a Plan C. He was forced to call off a Senate vote on the Senate version of a repeal bill just before the Independence Day recess, after as many as six Senate Republicans voiced opposition to the bill.

According to NBC, there have since been modifications to the previous Senate health care proposal. McConnell announced that a new version of the bill will be revealed on Thursday during what he called a "pivotal meeting." A Congressional Budget Office score is anticipated next Monday — a vote would take place later that week, Politico reported.

In terms of what changes have been made to the proposal, most of that has remained murky. "More money has been proposed to treat opioid addiction and for the state stabilization fund to help people afford their health care. Also being added is a measure that allows people to use their pre-taxed income that's put into Health Savings Accounts on insurance premiums, something that is currently not allowed," NBC reported.

But the bill reportedly includes no improvements to Medicaid, despite the public outcry against cuts.

At least one Republican senator has already expressed he is not happy with the direction things are going. "Doesn’t sound much like repeal to me," Sen. Rand Paul R-Ky., wrote in a Breitbart op-ed on Wednesday. "One might even argue it’s worse than Obamacare-lite because it actually creates a giant superfund to bail out the insurance companies – something even the Democrats feared to do."

Since taking control of Congress and the White House, Republicans have failed to pass any major legislation. The delayed start to recess does buy them a little more time, but at least a dozen Republicans in the Senate came out in opposition to the proposal in recent weeks, according to Vox. And it's unclear if their demands will be met or if they plan to vote for the bill anyways. Vox elaborated on the potential upcoming changes:

The underlying structure of the bill is unlikely to change, per early reports: It will probably still scale back Obamacare’s financial aid, repeal many of the law’s taxes, eventually end the generous funding for its Medicaid expansion, and place a hard cap on federal Medicaid spending.

The proposed changes — loosening the insurance regulations more, keeping some taxes on the wealthy, boosting financial assistance — might be politically important, but the outline of the existing bill seems almost certain to be preserved. There simply isn’t enough leeway for McConnell to overhaul the plan.

McConnell will need to obtain a minimum of 50 votes out of the 52 GOP senators, in which case Vice President Mike Pence could break a tie.

Senate Republicans have roughly five weeks to assemble something and vote on it.