"Our city is in ruins": Crushing wars are raging on in Syria and Iraq with no end in sight

Humanitarianism wars are easier to fund than the humanitarian peace 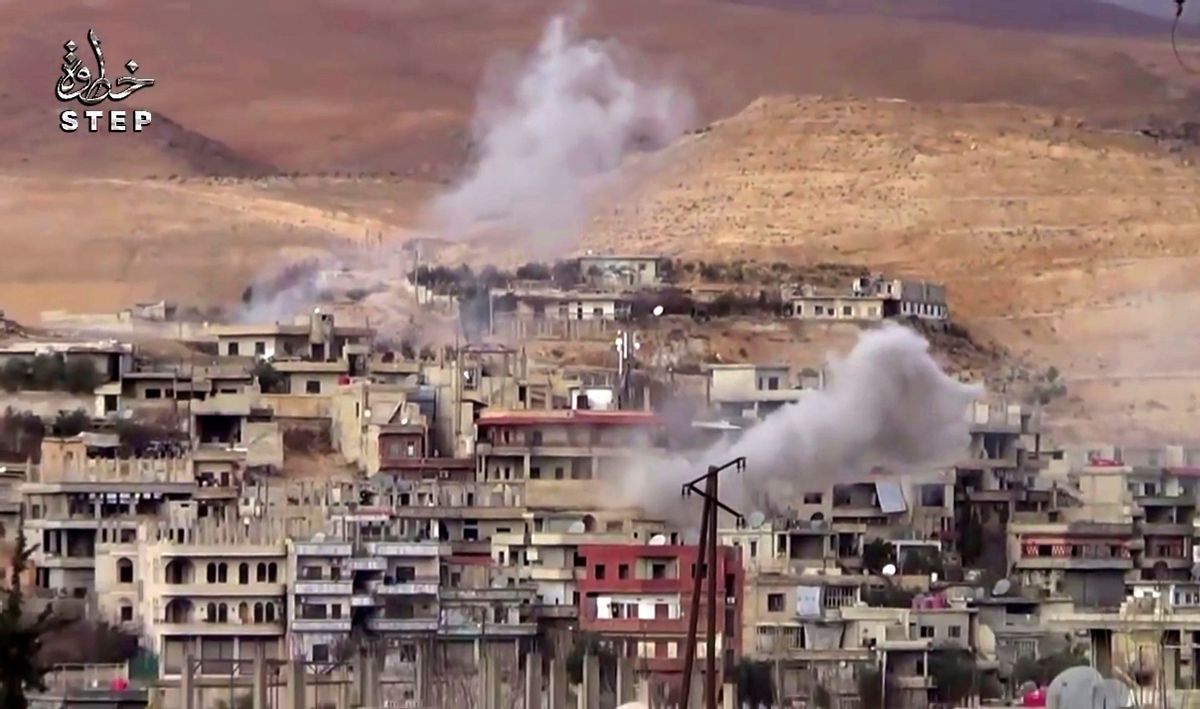 On 10 July 2017, Iraqi’s Prime Minister Haider al-Abadi arrived in the city of Mosul to declare it liberated from the Islamic State of Iraq and al-Sham (ISIS). Brigadier General Yahya Rasool, spokesperson of the Iraqi forces, told Iraqi television, ‘Their fictitious state has fallen.’

Prime Minister al-Abadi has been a senior member of one Iraqi government after the other since the illegal US invasion and occupation of that country in 2003. He was dismayed by the privatization plans of the US Viceroy in Iraq, Paul Bremer, and he participated in the lawsuit against the US mercenary army — the private company called Blackwater. At the same time, al-Abadi participated in governments led largely by his Islamic Dawa Party (which he joined in 1967 at the age of fifteen). This party has overseen — with US aid and encouragement — the breakdown of Iraqi society. The brutality of the US invasion and occupation as well as the sectarian policies of the Islamic Dawa Party drove the creation of ISIS in 2006 and then its expansion by 2014. This is a man with a front-row seat for the unraveling of his country.

What did al-Abadi see when he looked across the expanse of Mosul, one of Iraq’s largest cities? He would have seen not only the violence visited by ISIS upon this historic city — including destroying a large part of its Great Mosque of al-Nuri — but also the destruction of the city by this current onslaught that has lasted nine months. A million civilians fled Mosul; many thousands of civilians have been killed. They live in nineteen emergency camps — each wanting in basic needs. ‘The levels of trauma we are seeing are some of the highest anywhere,’ said Lise Grande of the UN’s Humanitarian Coordinator for Iraq. ‘What people have experienced is nearly unimaginable.’ The UN requested nearly $1 billion of the international community. It has received just over 40 per cent of what is required. With oil prices down, Iraq simply does not have the revenue to rebuild this destroyed city. It will need help.

Humanitarianism wars are easier to fund than the humanitarian peace.

‘Our city is in ruins,’ said Ayman who lives in the western part of Mosul. ‘They have treated us like we are absolutely nothing.’ Who is the ‘they’ in Ayman’s statement? ISIS surely, but also the Iraqi military and its US allies.

Ayman’s statement appears in an Amnesty International report that was released on 11 July — At Any Cost: The Civilian Catastrophe in West Mosul. It is a careful report, but with a point that should not be ignored. Amnesty suggests that the United States and the Iraqi forces ‘carried out a series of unlawful attacks in west Mosul.’ The report further says, ‘Even in attacks that seem to have struck their intended military target, the use of unsuitable weapons or failure to take other necessary precautions resulted in needless loss of civilian lives and in some cases appears to have constituted disproportionate attacks.’

The United States government attacked Amnesty for its conclusions. Lieutenant General Stephen Townsend said, in Washington, ‘I reject any notion that coalition fires were in any way imprecise, unlawful or excessively targeted civilians.’

Airwars, the group that studies aerial bombardment, shows — in a new report — that the US aerial bombardment of western Mosul increased by 21 percent in the past month, with the munitions concentrated on certain neighborhoods. This has led, Airwars says, to increased civilian deaths. Chris Woods of Airwars says, ‘The speed and intensity of these attacks — which the US now describes as a war of ‘annihilation’ — have placed civilians at far greater risk of harm. Heavy weapons also continue to be used on densely populated areas. The consequences are inevitable.’ Lt. General Townsend has not commented yet on the Airwars report. The term ‘annihilation’ is chilling.

The numbers put out by Airwars are deflated. ‘It is highly probable,’ the report notes, ‘that the death toll is substantially higher than this Airwars estimate, with multiple reports referencing thousands of corpses still trapped under the rubble.’ Reports from the ground suggest the use of illegal weapons — including white phosphorus (although the US has denied this) — as well as ‘horrific scenes of bodies scattering the streets.’ It will take a great deal of investigation to piece together the full-scale of the human tragedy first in the ISIS capture of Mosul and then in the US-Iraqi assault on the city.

Al-Abadi would also know that ISIS was able to expand in 2013 and 2014 partly because the Iraqi government crushed any attempt by ordinary Iraqis to get a better deal. A major political uprising from 2011 brought together groups such as the Union of the Unemployed of Iraq with the Organization of Women’s Freedom in Iraq. Their demands were for the recreation of their destroyed society, for an economy that benefits Iraqis and for a political project that unifies the people and does not tear open sectarian divides. The government did not listen to them. The path of nonviolent resistance was blocked in 2011, and then sent backwards when Iraqi security forces massacred peaceful protestors in al-Hawija in April 2013. After the massacre, ISIS scouts came into al-Hawija to recruit fighters. They said, ‘You tried the peaceful route. What did it bring you? Now come with us.’ Many did. Al-Hawija remains in ISIS hands. In fact, after the apparent death of ISIS emir Abu Bakr al-Baghdadi, the emir of al-Hawija — Abu Haitham al-Obaidi — declared that he was the new caliph. His forces are arrayed in the western part of al-Hawija, ready for a major battle.

Little wonder that the UN High Commissioner for Human Rights — Zeid al-Hussein — said that ‘dialogue between communities needs to begin now to try to halt the cycle of violence.’ Much water has slipped under the bridge. Not only the history of the brutality of the US invasion and occupation — which razed many of the cities in Anbar Province such as Fallujah and Ramadi — but also the ruthlessness of the Iraqi government as well as of the US-Iraqi war on Mosul. The way one fights a war suggests to the defeated the terms of the future. A brutal war can only mean that there will be no real ‘dialogue’ to prevent precisely the ‘cycle of violence.’

ISIS fighters fled Mosul for other parts of Iraq as well as for Syria. The battle is far from over. US aerial assaults on the Syrian cities of Raqqa, Hasakah and Deir Ezzor continue, increasing with great ferocity. Airwars suggests that the number of civilian deaths from the US-led air war in Syria is at the highest it has been for a long while. What is most startling is the assertion by Airwars that ‘casualty events attributed to the [US-led] Coalition in Iraq and Syria outpaced those reportedly carried out by Russia in Syria’ for the sixth consecutive month. That means that the civilian toll from US airstrikes has been greater than the casualty toll from the Russian strikes. Yet it is the latter that gets the attention by the Western media, while the former is largely – if not entirely – ignored. There is a theory, as I have written about previously, that Western bombing is benevolent, whereas Eastern bombing is malevolent. This seems to operate for the Western media.

US bombing in Raqqa has hit civilian infrastructure — including internet cafes and swimming pools, shops and mosques. There are reports of civilians being killed as they flee Raqqa. Lt. General Stephen Townsend, who derided Amnesty’s allegations about war crimes in Mosul, told the New York Times’ Michael Gordon a few days ago, ‘And we shoot every boat we find. If you want to get out of Raqqa right now, you’ve got to build a poncho raft.’ This is a violation of the UN’s 1981 Protection of Asylum-Seekers in Situations of Large-Scale Influx.

Meanwhile, the de-escalation zones continue to be formed in Syria to the great relief of the population. It is the only glimmer of hope in the region. Most of these de-escalation zones are in western Syria, with the most recent declared along the Jordanian border, including the provinces of Dara’a, Quneitra and Sweida. The UN Refugee Agency — UNHCR — said that 440,000 internally displaced people have returned to their homes during the first six months of this year. Over 30,000 Syrians who had left the country have now returned home. Some of these ceasefires relied upon discussions between Iran and Qatar. It is clear that one of the reasons for Saudi Arabia’s annoyance with Qatar is that it has participated actively in the creation of these de-escalation zones. Expansion of this zone is essential for the well-being of the people.

It would be valuable if this example of the de-escalation zones would set the ethical foundation for peace-making in Iraq as well as in northeastern Syria. Total warfare wins battles, but it can often prolong the war.