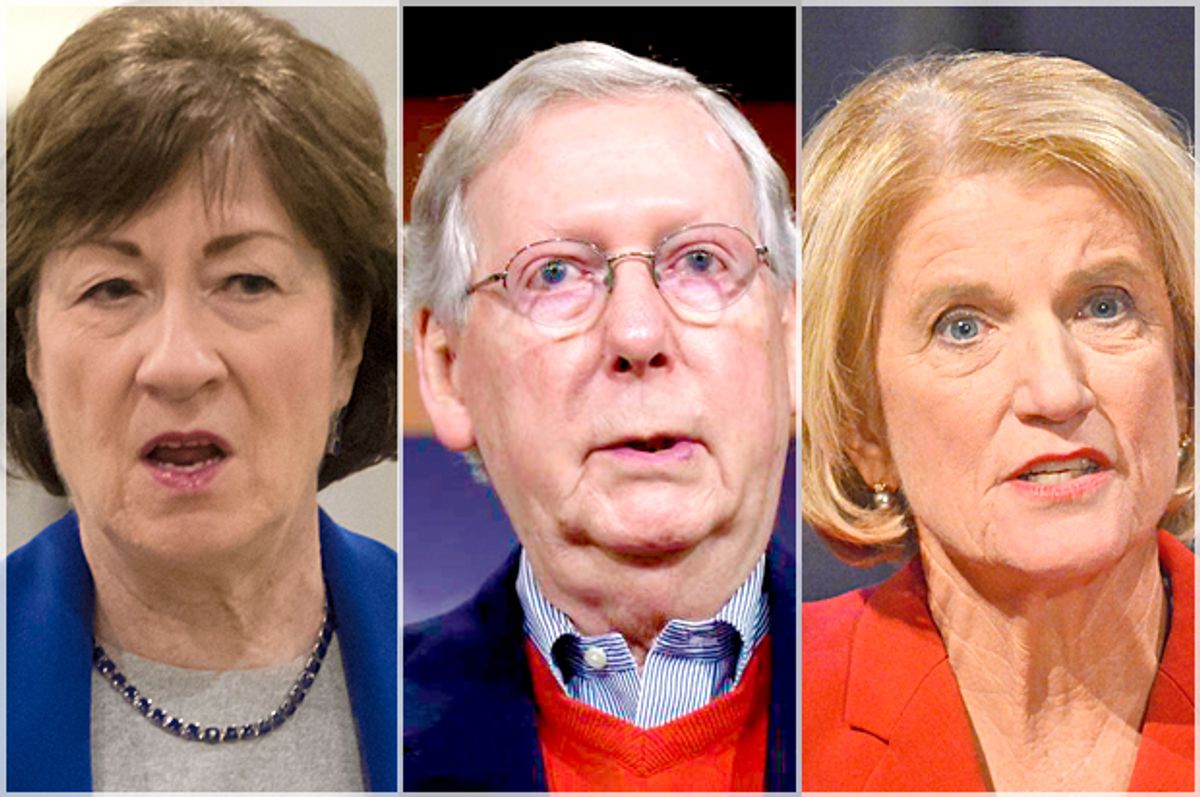 Although he hasn’t received as much undue adulation as his counterpart in the House of Representatives -- Paul Ryan, “policy wunderkind” -- Senate Majority Leader Mitch McConnell’s political skills may have been a tad overhyped this whole time. Orchestrating unprecedented obstruction to block a president’s legitimate Supreme Court nominee for nearly a year is proving to be much easier than overturning that president’s signature health care legislation.

On Thursday, McConnell released a revised version of the Senate GOP’s plan to repeal and replace the Affordable Care Act, or Obamacare. Faced with complaints and threats of defection from both flanks of his party -- ultra-conservatives and so-called moderate Republicans -- McConnell opted to revise the bill towards appeasing conservatives. In turn, the moderates greeted Thursday’s release of the revised bill with reservations.

“I need to really look at it, look at the [CBO] score. I still have concerns,” West Virginia Republican Shelly Moore Capito told reporters following a closed-door meeting of the Senate GOP caucus.

When asked if she would vote for the motion to proceed next week, Capito replied, “Wait and see.”

The most moderate GOP member of the Senate, Maine’s Susan Collins, was quick to announce that she won’t even vote for a motion to proceed to debate, a move that opens the bill up for a floor debate. Collins has long complained about the substance of the bill but also cited her displeasure with McConnell’s stewardship on Thursday. She wants the bill to move through the committee process, a route that McConnell has skipped.

McConnell has given up on seeking experts from any of the major stakeholders in the health care industry (every major organization representing health care providers has publicly opposed the bill) and has even left most of his Republican colleagues in the Senate in the dark during the crafting of both bills. Instead, the Kentucky Republican has relied on lobbyists to write the legislation.

“[T]his has been part of the process that I think most of us have — or many of us have found very troubling," Republican Sen. Lisa Murkowski told Alaska Dispatch News on Tuesday. She explained that crafting a major overhaul of the Medicaid program "without process … without working with the other side … is just, I just think fundamentally wrong." Politico reported that Murkowski chastised Senate leadership in a private meeting this week for overhauling Medicaid as part of their Obamacare repeal bill.

While McConnell’s revised version of the bill significantly scales back Republicans’ planned tax cut for the wealthy, it curiously doesn’t touch the provision that rolls back Obamacare’s Medicaid expansion, a major bone of contention for moderate Republicans and a move that the Congressional Budget Office said could leave as many as 15 million Americans without coverage. The Washington Post reported on Thursday that McConnell’s office has “been holding their own heart-to-hearts with moderate senators, trying to convince them to vote for the bill even with the Medicaid cuts intact.” The Post’s Paige Cunningham explained:

Here's what McConnell has told several hesitant senators (including Portman and Sen. Shelley Moore Capito (R-W.Va.): The bill’s deepest Medicaid cuts are far into the future, and they’ll never go into effect anyway.

“He’s trying to sell the pragmatists like Portman, like Capito on ‘the CPI-U will never happen,’” a GOP lobbyist and former Hill staffer told me.

Under the current version of the Senate health-care bill, federal Medicaid spending would drop by 26 percent starting in 2026, pegged to the Urban Consumer Price Index. That's still eight-and-a-half years away -- long past senators' next election. And cutting Medicaid is so unpopular, with so much resistance from the health-care industry, that it's likely Congress would find a way to avoid the cuts when the time comes.

Despite his cajoling, the so-called master tactician of the Senate is now at the edge of not having enough votes to even call up the health care bill next week for a vote, as McConnell pledged he would do after he delayed the Senate’s August recess by two weeks. His Senate colleague from Kentucky, Republican Rand Paul, still opposes the bill, despite the inclusion of a new provision from conservative Sens. Ted Cruz of Texas and Mike Lee of Utah. More moderate members like Nevada’s Dean Heller and Ohio’s Rob Portman told reporters on Thursday that they weren’t willing to go on the record in support of even a motion to consider debate on the bill.

But who are we kidding? Portman is going to vote for this if it comes to the floor. Many of the moderates from states Trump won will, when push comes to shove, and that is exactly McConnell’s endgame.

"We've got a long way ahead of us yet," John Thune of South Dakota, the No. 3 Senate Republican leader, told the Associated Press on Thursday. "The floor is going to be a wild place next week."