“’Claws’ is the reverse ‘Sopranos’": Jason Antoon is redefining diversity on TNT’s “Claws” 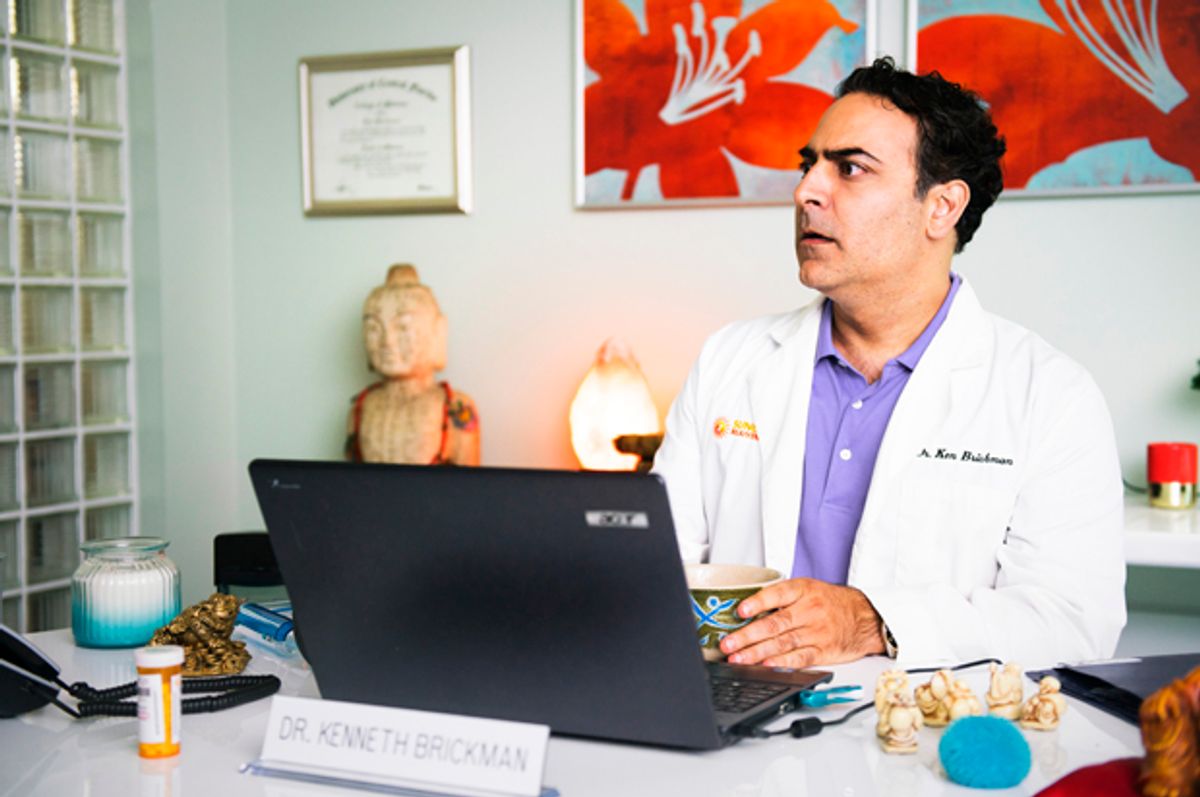 The casting director, showrunner and head writer for TNT's "Claws" — an hour-long dramedy about a gal-gang of quirky, money-laundering manicurists in Central Florida — are sitting behind the table, chuckling. For actor Jason Antoon, this reaction is par for the course. He's an easy-going, funny guy, but this time there's an extra ease to what can be a stressful audition experience. He feels unexpectedly calm. He finishes his audition lines in one take, thanks everyone, jokes around for a few with the assistant and goes out to his car. Drives home. Eats a salad. Later, his agent calls him to say he got the part of Dr. Ken Brickman, a series regular on all 10 episodes.

"Usually if they've already tested for an Indian guy and they want someone interesting, I have a pretty good chance going in," Antoon tells me over the phone. He pauses for a moment. "But I didn't audition for 'Harlots!'" he admits, laughing.

Antoon is Lebanese-American. With his signature black, curly hair and self-described "big-saucer eyeballs," he generally plays comedic roles that lean toward ethnic yet seem to transcend type. Whether this is indicative of Antoon's range, the current move to capture a more nuanced representation of race in America, or merely representative of the faux diverse melting pot we call entertainment is hard to pinpoint.

"They can't check me off in the diversity box," Antoon admits cheerfully.  "Originally, people asked, 'What is Jason?' and when I went, 'Lebanese,' they went, 'OHHHHH.' Only no one knew what Lebanese was. Like Danny Thomas is Lebanese. They see me and think, 'You're tan. You're Jewish. You're Greek. You're Arab. You're a mad scientist . . .' In the beginning I played a cab driver but I never played a terrorist. They were getting guys who looked more menacing."

Just as Antoon can't be pigeonholed, his new show, "Claws," exists outside of any pre-existing TV category, which seems to be making some critics uncomfortable while delighting others. It hovers somewhere between a bedazzled mashup of "Steel Magnolias" and an estrogen-infused "Breaking Bad." That the men, including Dean Norris, a coke-snorting macho bisexual named Uncle Daddy, play the supporting roles to the women is, somehow, all the more confusing.

The always amazing Niecy Nash ("Getting On") stars as Desna, the proprietor of the Nail Artisan of Manatee County Salon, where she also happens to launder money for a low-rent pain clinic that prescribes OxyContin and and other illegal painkillers for cash. Desna is in the last throes of doing this dangerous dirty work. She wants to open up a nail salon in nicer Sarasota, but her plans to get out of the whole dirty business plus get a new house for her and her autistic brother (Harold Perrineau) are derailed by unsavory boy-toy Roller and his low-down Uncle Daddy. It all goes awry from there.

"'Claws' is the reverse 'Sopranos,'" Antoon says. "The writers made a decision that it's all about these five amazing female leads (Nash, Carrie Preston, Jenn Lyon, Karrueche Tran and Judy Reyes) all getting entangled in crime and forming this crazy mob. It's like any time a guy enters, he's a disease. The question is how do you get men to watch the show? Just put a picture of Dean Norris somewhere and all the white guys go, 'Oh, I loved that guy from 'Breaking Bad.'"

Antoon is from Santa Monica and graduated from Carnegie Mellon with a degree in drama. His father worked in the music industry, where he was afraid to say he was Arab, especially after TWA Flight 847 was hijacked in 1985. This liminal American identity was also pervasive in Antoon's high school. Rather than adhering to one group to the exclusion of all others — this was before the current fracture of identity politics — there was more of a sense of floating rather than belonging. The question, whence does the comic identity emerge from this fog of the self, found or rather expressed itself in theater during his last two years of high school.

Years later, in 2000, Steven Spielberg happened to catch Antoon on Broadway in Susan Stroman's smash hit "Contact," and cast Antoon in "Minority Report," which kick-started a series of kooky-scientist/doctor/hacker roles where Antoon was ethnically ambiguous — not Arab but not necessarily white. Not American but not un-American.

"After I did 'Minority Report,' I was like, I'm the Lebanese Jack Black!" Antoon says. "But then they don't want that. They want the white Jack Black. You can't have the same careers as the people I emulated as a kid anymore. It's not like Peter Sellers did an episode of 'Law & Order,' especially as a what-the-fuck-are-you diversity person."

When Jenji Kohan was creating "Orange Is the New Black," a fictionalized version of Piper Kerman's titular memoir about an upper-middle-class white woman's year in a federal prison, she told NPR that she needed the character Piper Chapman to act as a "Trojan horse." The idea being that the young, blonde college grad was a selling point to the network — read white men — as well as an access point for the the nice, white demographic who wouldn't otherwise initially "connect" with the black, brown or even old women who turn out to be the most memorable, moving and important characters on the show. This says a lot about how far we haven't come; or maybe it's just that everyone still needs a tabula rasa, a WASPy, bland everywoman on whom to practice transference or to rest our weary eyes as we binge our way through the TV universe.

Emma Stone playing Asians aside, in one sense, casting is inching toward embracing diversity. In another sense, we still have a long way to go. "Claws" is not "Girls." Everyone is not white. The diversity of the cast also reflects Central Florida. Yet one wonders how any of this will play out in the current polarized political atmosphere. Does diverse casting mean an ethnically ambiguous actor plays a character with the last name Brickman? Or is it the surgery board at Grey-Sloan Memorial Hospital? Does it mean shows set in New York will finally reflect the riders of the MTA rather than some whitewashed Anthropologie advert?

"When I was starting out, Aasif Mandvi would get all the parts where you needed to have an Indian or an Arab, and I'd get the friend who could be any ethnicity," Antoon says. "Now you have Aziz Ansari with 'Master of None' and Kumail Nanjiani on 'Silicon Valley' and 'The Big Sick' and they are changing the way people see Indian and Pakistani people as as comic leads."

The way money-people envision leads is important because for so long leads had to be white and cute, especially women. Men can look like Seth Rogen or Jonah Hill, but women have to look like stick insects with tits. I ask Antoon if he thinks Aziz Ansari or Kumail Nanjiani will change the way people see a Lebanese dude from L.A. Ansari's parents are from India. Nanjiani is originally from Pakistan.

"People who watch 'Claws' probably think I'm Jewish!" Antoon says, laughing. "The whole thing is weird, though, because of the way it all happened, the way I got the part of Ken. It's like they way you meet your wife later in life and you know who you are, so it's the least complicated version of yourself, you know? Somehow it just works out. You just embrace who you are and hope others will follow."