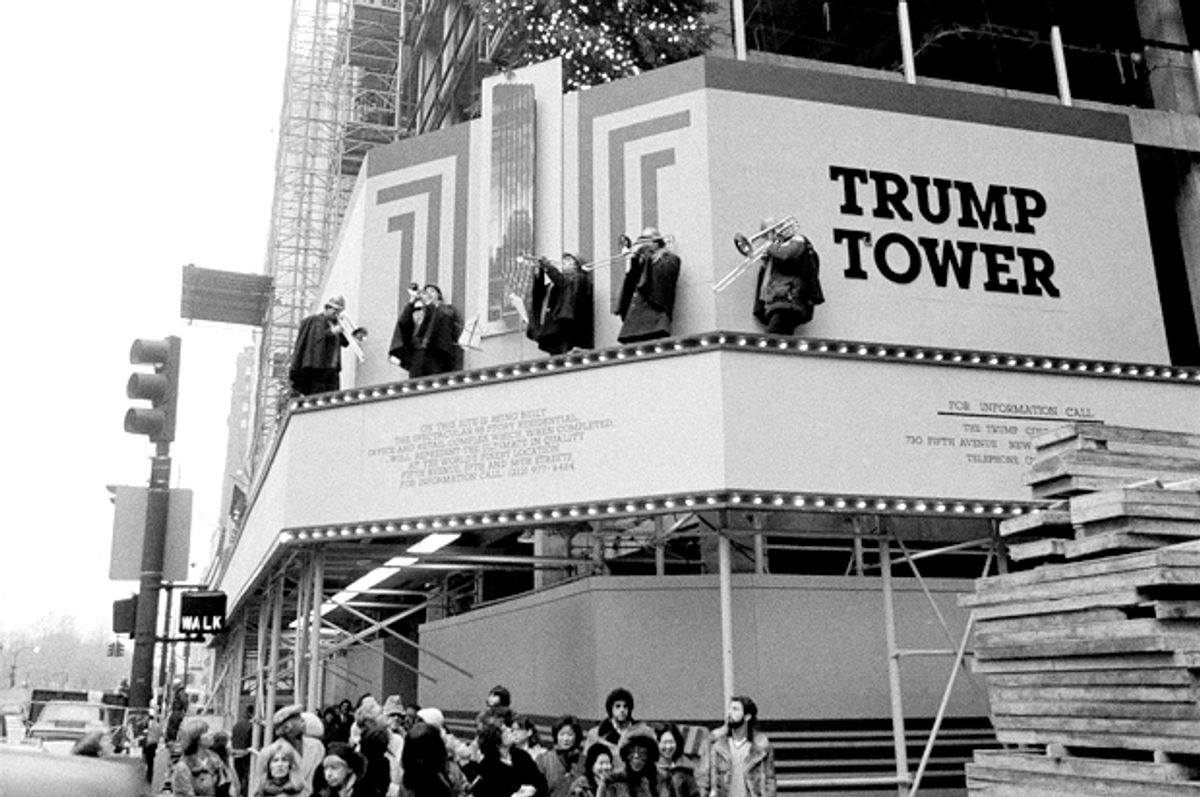 On Air Force One on Thursday, President Trump actually took questions from reporters but there was some confusion about whether or not the exchange was on the record. The White House later released a transcript that left out a couple of things. Since reporters were released from their agreement to keep it off the record, they filled in the blanks:

So we are getting closer to an admission that our president knew that representatives of the Russian government wanted to help him win the election. He simply doesn't believe there's anything wrong with that.

We know for sure that he doesn't think there's anything unusual about it. He told the reporters:

When asked about it again during his press conference in Paris with French President Emmanuel Macron, he said the same thing.

Donald Trump used to brag about doing business with Russians. He told David Letterman back in 2013 "I've done a lot of business with the Russians, I know the Russians very well. They're smart and they're tough and they're not looking so dumb right now." That was around the time of the Miss Universe Pageant in Moscow, when Trump was tight with billionaire oligarch Aras Agalarov, also known as Putin's builder, and his pop star son Emin, both of whom were instrumental in the "Hillary dirt" meeting with Donald Jr. After years of trying fruitlessly to get a Trump project off the ground in the country, he had finally succeeded in making the contact who could make his dream come true.

According to Michael Isikoff at Yahoo, it was a typical Trump arrangement in which Agalarov would build the tower and license Trump's name for big dollars. Donald Jr. was put it charge and Ivanka even made a trip in 2014 to see the proposed property. Unfortunately for the Trumps, the project got shelved when the Russian economy went south due to the sanctions imposed by the U.S. and the European Union following the Russian incursion into Crimea (something President Trump is now in a position to "fix").

Agalarov told Forbes back in March that he was still on board the Trump train and that “anything Trump related I would be interested to pursue. I think today the Trump brand is stronger all over the world. And him being the president; I mean, it’s a big brand now.” Indeed it is.

Nonethless, Trump was all over the map about his involvement with Russia during the campaign, saying in one breath that he was good pals with Vladimir Putin and another denying that he'd ever had anything to do with Russia in any way, shape or form. In his first press conference as president he said, "I own nothing in Russia. I have no loans in Russia. I don't have any deals in Russia."

But asking if Trump has investments in Russia was never the right question. The question to ask was whether any Russians had investments in Donald Trump. Some years back Donald Trump Jr. told a real estate conference, “Russians make up a pretty disproportionate cross section of a lot of our assets. We see a lot of money pouring in from Russia.” When writer James Dodson asked how the Trumps were able to finance their purchase of golf courses during the recession when credit had all dried up, Eric Trump told him, "Well, we don’t rely on American banks. We have all the funding we need out of Russia." (Eric Trump has denied he ever said this.)

Nonetheless it has been difficult to analyze Trump's financing arrangements since his company is family-owned and he refuses to release his tax returns or detail his holdings in any useful way. We know Trump was cited numerous times for money-laundering in his Atlantic City casinos. (I wrote about that here.)  But this blockbuster article by Craig Unger in the New Republic confirms that Trump has been financed for years by Russian mobsters who have laundered money through his high-end real estate projects. And when I say Russian mobsters I'm talking about the most powerful Russian mobsters in the world.

Unger makes clear that he can find no evidence that Trump was ever involved in criminal activity, or knew exactly where the money pouring into his buildings was coming from. He didn't need to know or want to; if nothing else Trump has finely honed survival instincts. But Unger also documents that criminals and oligarchs lived in and ran illegal activities out of Trump properties, including Trump Tower in Manhattan, for more than 30 years. They provided Trump with some of his most lucrative branding deals, the ones in which he was not required to make any personal investment. The unending flow of Russian money, Unger writes, that "provided Trump with a crucial infusion of financing that helped rescue his empire from ruin, burnish his image, and launch his career in television and politics."

It's hard to believe that anyone with that kind of criminal exposure would think it was a good idea to run for president. But Trump had been in the public spotlight and had gotten away with it for years. Books were written about his ties to criminals and he's been sued thousands of time for fraudulent business practices. In his experience, this is just how the world works.

Trump's comments about his son's nefarious meeting shows that he believes everyone does whatever it takes to win and use any means at their disposal. He's so casual about it that it's obvious that if at some point before he ran for president he was personally offered the help of the Russian FSB, he would have taken it without a second thought. He simply assumes that everyone in the world is exactly like him.

I'm sure there is a clinical term for this but it's just as easy to simply say that he has the ethos of a mobster. Why wouldn't he? He's been doing business with them for years.