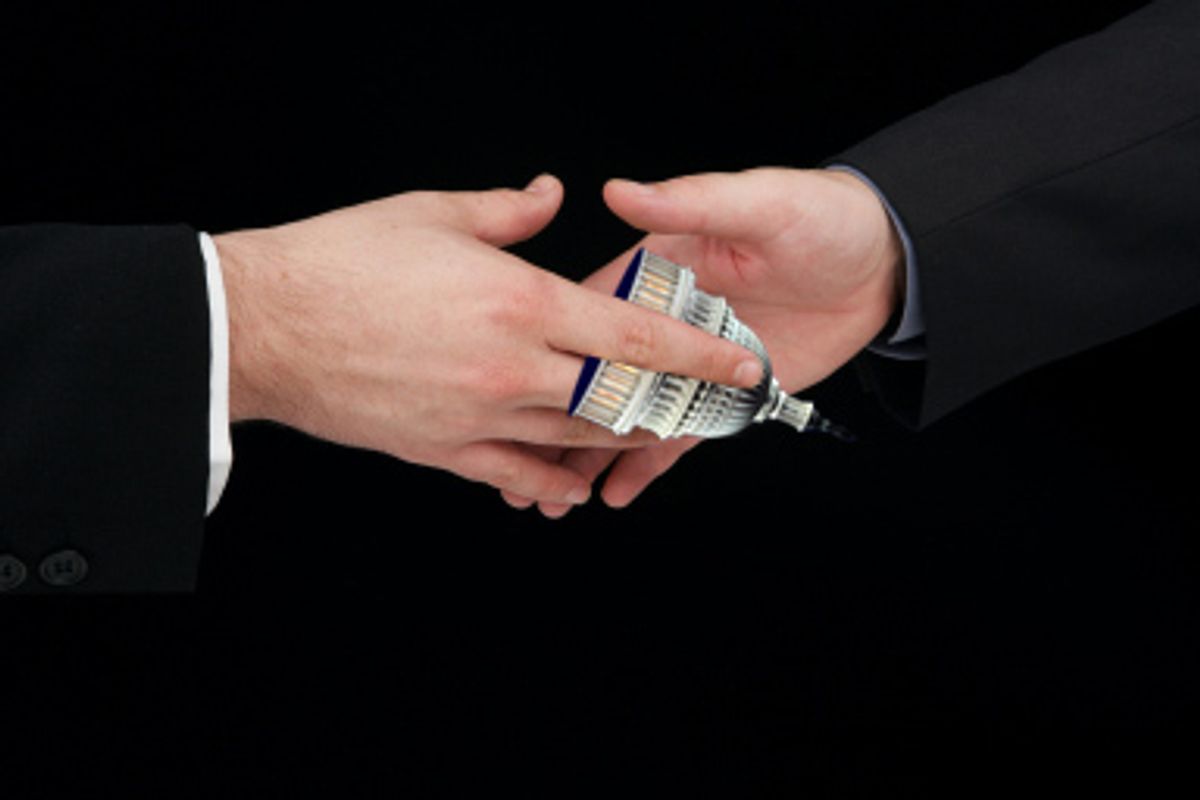 Lobbyist Brian Ballard has for years been a power player in Florida, plying the corridors of the state capitol in Tallahassee on behalf of A-list clients such as Google, Uber, Honda — even the New York Yankees.

Now, the 55-year-old University of Florida Hall of Fame member — a major Donald Trump fundraiser who also worked on the president’s transition — is out to prove he can translate his state-level lobbying chops into policy victories for a slew of new clients in Washington, D.C.

And he must ply his trade in the nation’s capital without looking as if he’s selling access to a president who has promised to stand up to special interests — a tricky course to navigate that has quickly tripped up other Trump alumni such as former campaign manager-turned-lobbyist Corey Lewandowski.

“There's a lot of blurred lines you know,” Ballard said. “It's easy to say ‘oh you are Trump’s person, you get this and that,’ but I don't think it works out that way.”

But more than a few special interests apparently believe it does work that way, as Ballard hasn’t had to work hard to land fresh business.

Since opening his Washington, D.C., office in January — the new digs are just three blocks away from the White House and stocked with prominent influence brokers — Ballard has signed 35 federal-level clients.  Most haven’t previously worked with him.

In just five months, Ballard Partners’ federal lobbying operation has generated nearly $4 million in current and contracted business from foreign and domestic lobbying clients, according to a Center for Public Integrity review of lobbying records filed with the U.S. Congress and Department of Justice. That’s as much lobbying money as some established firms make in a year.

Ballard, whose firm remains a powerhouse in the Sunshine State, said he’s always been interested in entering the Washington, D.C., lobbying market.

“It seemed,” he said, “that this was the time if we were ever going to do it.”

Pressed on why he chose to launch his Washington lobbying business now, Ballard didn’t specifically mention Trump — for whom he raised 2020 re-election campaign money as recently as June 28 at Trump’s hotel in Washington, D.C.

Instead, Ballard broadly touted his long-standing relationships with Republican congressmen, governors and pre-Trump presidential candidates, such as John McCain and Mitt Romney.

“All relationships come into play,” said Ballard, who splits time between Washington and Tallahassee and lives out of a D.C. hotel about three nights each week while he searches for a home in the nation’s capital.

Ballard’s Trump connections are clearly part of his allure. And when a firm such as Ballard Partners hits the D.C. market, potential lobbying clients — such as the Dominican Republic — notice.

The island nation’s decision to hire Ballard’s firm is a big switch from their prior lobbying choices, Squire Patton Boggs and Steptoe and Johnson, both established K Street players.

Ballard has met with the ambassador personally and helped the country’s “orientation” with the Trump administration, said Felipe Herrera, counselor for the Dominican Republic’s embassy in the United States. Herrera wouldn’t give details on what this “orientation” entailed.

Ballard’s rapid ascent is a familiar Washington story — but the moral of the story is more than a little unclear.

For some veterans of D.C. political battles, this is simply how the system works: Hard work and access are rewarded, and prospective clients are justifiably searching for those who can best argue their interests.

For others, the Ballard tale represents but the latest cynical example that well-heeled insiders call the tune and the rest of us are left on the outside looking in — hardly the draining of the swamp that Trump has repeatedly promised.

“You have an obligation to someone who helped you out in the past,” Gilbert said.

Added Steve Spaulding, chief of strategy for political reform group Common Cause: “People are cashing in on their connections for those willing to pay.”

Ballard has seemingly always been a man in a hurry. After graduating from the University of Florida and its law school, Ballard became the director of operations to then-Florida Gov. Bob Martinez at the tender age of 26.

Ballard has been a household name in Tallahassee ever since, serving in various roles for a variety of Republican politicians, including former Florida Gov. Charlie Crist and current Gov. Rick Scott. He served as the Florida finance chairman for the Republican presidential campaigns of both McCain in 2008 and Romney in 2012.

While generally in league with Republicans, Ballard isn’t a conservative caricature. He’s occasionally given Democrats money, touts his environmentalist credentials and has over the years lobbied for hundreds of clients, each of which have their own political agendas. He hires bona fide liberals to work at his firm.

Ballard even married into politics, as his wife, Kathryn, is the daughter of Jim Smith, a one-time Florida gubernatorial candidate who also served last century as Florida secretary of state and attorney general. Ballard and his father-in-law also worked together for many years.

Perhaps not surprisingly, Ballard’s official firm biography boasts that he “is one of the top political insiders in Florida.”

Whether they’re fans or foes of Ballard, Florida politicos tend to agree with this self-assessment.

“One of the three or four hardest working lobbyists in Florida's capitol,” said Peter Schorsch, publisher of FloridaPolitics.com and INFLUENCE Magazine, which tracks the governmental affairs industry in Florida. “Even after building the highest-grossing firm in the state, he still walks the hallways himself. Truly, a general who leads from the front.”

Ballard’s far-flung Florida operation has offices in Tallahassee, Tampa, Orlando, Fort Lauderdale, Coral Gables and Jacksonville. Tony Boselli, the former all-pro offensive tackle for the Jacksonville Jaguars, is a managing partner based in the Jacksonville office.

On Ballard’s Florida client list from 2013 to 2016? The Trump Organization.

When Rubio quit the race in early 2016, Ballard backed Trump, whom he first interacted with three decades earlier while working as a young gubernatorial staffer for Martinez.

Trump, of course, won the presidency. And Ballard, who’d help The Donald raise millions of dollars in his quest to best Democrat Hillary Clinton, even cast a vote for Trump as a member of the Electoral College.

All the while, Ballard’s national profile has continued to increase, and he’s “doing it without being a peacock like so many of the other new faces to the city who have ties to Trump,” Schorsch said. “Brian's acting like he's been to the end zone before.”

This year, for example, Ballard joined the Republican National Committee’s national finance leadership team. He also served as vice chairman of Trump’s inaugural committee and as a member of the Trump presidential transition finance committee.

These are credentials many clients find attractive.

For example, Wallace Cheves, managing partner of Sky Boat Gaming and a new client for Ballard, said he signed on because of Ballard’s “class A name on national issues with the Republican party.”

Ballard’s D.C. office is now heavy on Trump campaign and transition veterans such as Susie Wiles and Dan McFaul. While Ballard may downplay his Trump ties, Wiles and McFaul aren’t being as shy about their connections.

McFaul’s Ballard Partners biography advertises his role as a Trump presidential transition team member and notes he was responsible for “recruiting and vetting potential appointees to the upcoming administration, specifically for the Department of Defense, Department of Veterans Affairs, the Armed Services and the Intelligence community.”

Wiles’ biography describes her as “Florida’s Senior Strategist for the Donald J. Trump Campaign.” The biography further mentions that “Florida, the largest of the swing states in the 2016 cycle, was a winning state for Trump/Pence.”

Wiles’ long history in Florida politics includes a stint as chief of staff for John Delaney, the one-time mayor of Jacksonville who’s now president of the University of North Florida.

Delaney told the Center for Public Integrity that Wiles was poised to take a position in the Trump White House but decided against it.

“She likes to help her friends and she felt she could be more effective from outside the White House,” Delaney said.

Wiles declined to discuss particulars of the prospective Trump administration job beyond saying it related to her prior work both inside and outside government. (Her past clients have ranged from education interests to railroads.)

Does Wiles have qualms about using her ties to Washington political machinery — Trump, especially — to score points for paying clients?

"I wish the system didn't require it, that you could make a change where you wouldn't have to rely on that, but the government is so big and is based on influence by special interests,” Wiles said. “I wish it was different but this is the way it is.”

Take Lewandowski, Trump’s first campaign manager. He launched a lobbying firm with another former Trump staffer. But Lewandowski faced accusations he was selling access to Trump, and he left the firm last month.

For Ballard, though, it’s been full steam ahead —with a stable that includes not just Trump supporters, but also more traditional D.C. power players. For instance, Ballard has also hired former Rep. Robert Wexler, D-Fla., who is quarterbacking the firm’s contract with Turkey.

While in Congress, Wexler served on the House Foreign Affairs Committee.

Former Rep. Bob Livingston, R-La., a lobbyist who himself once advocated for Turkey, recalls lobbying Wexler on Turkey’s behalf back in those days.

“He was very effective, bright and articulate” with a “genuine interest in Turkish issues,” Livingston said of Wexler.

Wexler calls lobbying “the same as lawyering, an honorable effort that serves a valid purpose.”

Reich, who at Ballard Partners specializes in international affairs, has been a controversial figure since the 1980s, when the U.S. General Accounting Office found he engaged in “prohibited covert propaganda” in a bid to sway public opinion in support of Nicaraguan contras.

The firm’s contracts with those three clients are collectively worth more than $2.6 million annually, according to disclosures filed with the Department of Justice.

Meanwhile, two other Ballard clients — Univision and the Socialist Party of Albania — appear eager to court Trump’s administration after their own campaign-season conflicts.

Univision, a Spanish-language television network headquartered in New York City, refused to broadcast the Trump-owned Miss Universe and Miss USA pageants after he made disparaging remarks about Mexican immigrants while campaigning.

Trump later sued Univision for $500 million. The lawsuit has since been settled.

Trump himself booted Univision journalist Jorge Ramos from a campaign press conference in 2015.

Univision is now turning to Ballard to help mend the rocky relationship between Trump and the network.

Jessica Herrera-Flannigan, executive vice president of government and corporate affairs at Univision, declined an interview request. But she said in a written statement that the network hired Ballard Partners to “advise us on changing government policies and regulations, as well as on general telecommunications, immigration and small business issues.”

The Socialist Party of Albania, currently the ruling party in the Balkan nation, also has some fences to mend: Edi Rama, the current prime minister and party leader, said during the campaign that Trump represented a “threat to Albanian-American ties.”

The party did not return requests for comment. Nor did several other Ballard clients, including the American Health Care Association.

Several others refused to respond to a request for comment on why they chose Ballard’s firm — Amazon and American Airlines among them.

Ballard maintains the firm’s Washington office is “trying to honor the president and administration by not marketing relationships.”

“We don't like to beat our chest,” Ballard said, “or talk about things that are inappropriate.”

And given his burgeoning lobbying business, Ballard Partners apparently doesn’t have to.