Now that a White House insider is implicated, Team Trump may begin to fall apart

There's still a cadre of loyalists, doing their best to spread lies. But the Trump coalition is coming unglued 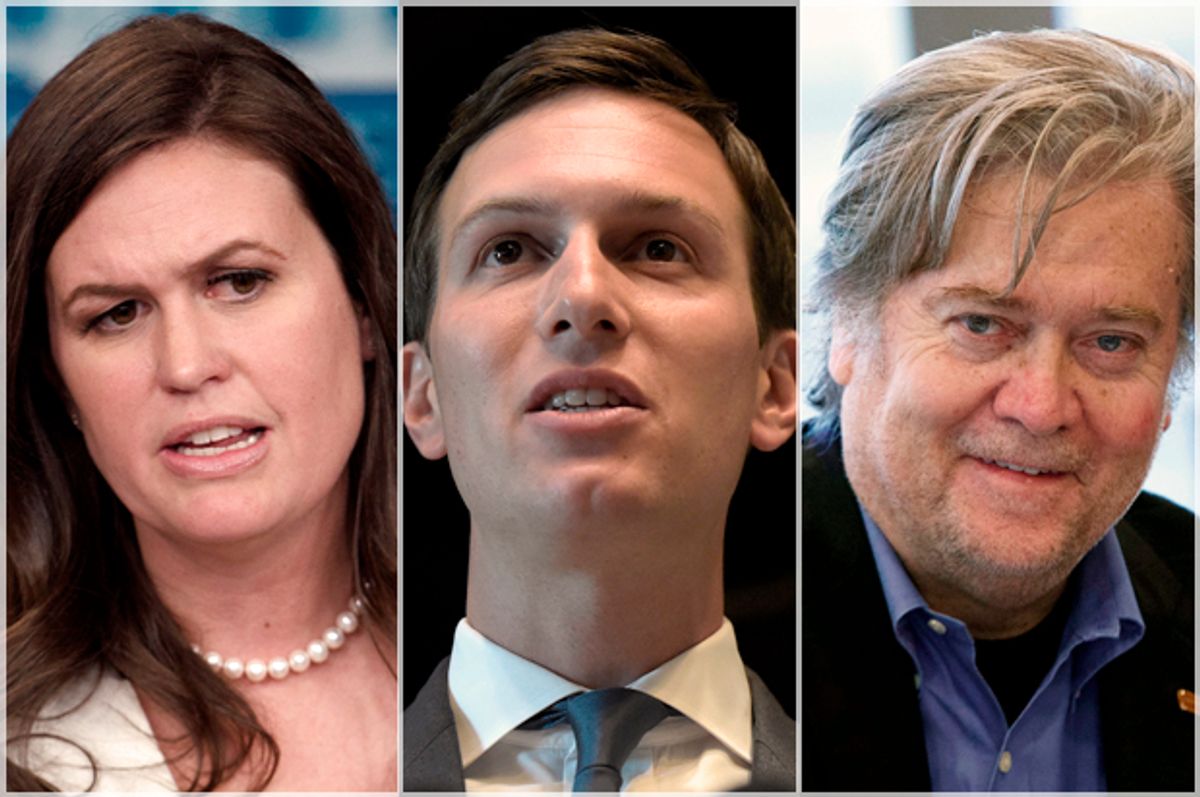 For the first time in a year’s worth of reporting on the Russian attack on the 2016 presidential election, a series of watershed articles published by the New York Times has placed one of the alleged conspirators inside the White House. Specifically, the attendance of President Donald Trump’s son-in-law and constant shadow, Jared Kushner, in the June 9, 2016, meeting between Donald Trump Jr., Paul Manafort and a Kremlin-linked Russian lawyer named Natalia Veselnitskaya represents the first hard evidence that a senior White House aide was in on the conspiracy.

While much of the reporting so far has provided a sense of who’s most involved in the plot, this is also the first time that a Trump insider, the president's eldest son, has deliberately spilled the beans about his own involvement and the involvement of Trump A-listers Kushner and Manafort -- Kushner being the only figure in the meeting last June who is currently a White House staffer. As a consequence of these revelations, we’ve heard that chaos inside Trumpworld has been significantly amplified, with, for example, rumors swirling around Washington that Kushner may have outed Trump Jr. in order to divert attention away from himself.

Meanwhile, in addition to admitting to what could be treasonous activities, the president and his hectic press office continue to formulate kooky explanations for the meeting, including that the Democrats somehow framed Donald Trump Jr., coercing him to attend the bogus meeting with Veselnitskaya. Naturally, this raises a salient question: If the Democrats were behind the entire Trump-Russia story, why didn’t they leak any of the damning information about it during the 2016 election, when it would have been useful to them? This blindingly obvious tall tale grows even more dubious when we loop into the equation all of the other fronts in the story, including potential money-laundering, social media psy-ops, fake news, weaponized bots and attempted infiltration into various election systems, not to mention the elements of the subsequent coverup, including obstruction of justice and abuse of power.

As always, the White House triage is confoundingly herky-jerky and nearsighted, focused on this one story while neglecting the myriad other angles being pursued by both the press and federal investigators. In other words, the Trump machine is constantly reacting to individual news stories while leaving itself open for glaring contradictions and backpedaling when the next batch of stories drop. For instance, President Trump himself apparently signed off on the “adoption” excuse while returning from the G20 -- only for this flimsy excuse to become blindingly obsolete given new press revelations the following day, and the day after that. Whomever first observed that Trump lives in “the eternal now” absolutely nailed it.

The other whopper the pro-Trump conservatives are peddling is that the Democratic Party colluded with operatives in Ukraine to dig up opposition research on Trump. This could be the most absurd story they’ve conjured so far, as well as being another case of Trump going full Pee-wee Herman: Call it the “I know you are but what am I?” gambit. The Clinton-Ukraine excuse presupposes that  there wasn’t enough damaging information on Trump in the first place that could be gathered through publicly attainable, domestic sources. It also leaves out that absolutely nothing was mentioned about this plot in the DNC emails that were stolen by Russian intelligence and released, to Trump’s delight, via WikiLeaks.

It’s dizzying that we have to even mention this, but the Ukrainian government wasn’t engaged in an historically pervasive cyber-attack on the United States and the 2016 election, nor is there any connection between the Democrats and such an enterprise. Likewise, the Democrats haven’t obstructed justice in any kind of transparent attempted coverup. Hell, Trump is the president: He gets daily briefings on national security. If there were a Democratic version of the Trump-Russia story, he would’ve found out about it a long time ago, and blurted it on Twitter.

Again, the Trump White House is not playing a long game. It’s the eternal now. That’s why House Oversight Committee chair Rep. Trey Gowdy, R-S.C., is so visibly frustrated with Trump at the moment. The heretofore party loyalist and pit bull House investigator went on Fox News this week and excoriated Trump’s political doofery, telling the network’s pro-Trump audience, “If you had a contact with Russia, tell the special counsel about it! Don’t wait until the New York Times figures it out!” He continued, "Someone needs to get everyone in a room and say, from the time you saw 'Dr. Zhivago' until the moment you drank vodka with a guy named Boris, you list every single contact with Russia.”

If you open your window and listen carefully, you might hear the sound of the Trump coalition ripping apart at the seams.

In addition to Gowdy, it’s Trump’s corruption and rank incompetence, not to mention his erratic, obnoxious, unpresidential behavior, that’s finally driven MSNBC morning show host Joe Scarborough to leave the Republican Party, changing his status to that of an independent voter. Until recently, Scarborough had been an intermittent Trump supporter, going so far as to advise the president-elect during the transition. Trump probably doesn’t care, but he ought to. Trump stupidly drove away his last ally at NBC News just as MSNBC is skyrocketing in the ratings, crushing Fox News. (The Rachel Maddow and Lawrence O’Donnell shows on MSNBC ranked No. 8 and 9 in the ratings on Wednesday night -- among all shows, across all of television, including the networks.)

Even intrepid conservative thinker Charles Krauthammer seems to be abandoning Trump. The longtime political commentator and columnist said on Fox News this week, “If you get a call to go to a certain place in the middle of the night to pick up stolen goods and it turns out the stolen goods don’t show up but the cops show up, I think you’re going to have a very weak story saying, ‘Well, I got swindled here.’”

No one’s buying this ridiculous series of childish, flimsy alibis. When we consider that other prominent Republicans like David Frum, Bill Kristol, Rick Wilson, Charlie Sykes, Nicolle Wallace and Steve Schmidt abandoned their party’s nominee more than a year ago, it seems as if Trump’s roster of friends is growing thinner by the day. It’s these Republicans and others who will make the difference when it comes to backstopping the end result in the Trump-Russia investigations, when Trump's loyalists try in vain to undermine the dispensation of justice.

The Resistance will need all hands on deck as the various inquiries push closer and closer to Trump’s spackled face. We can probably count on the White House to grow increasingly erratic and unpredictable as the bombshells fall. There are few avenues of escape for Trump and his henchmen, but the paths that remain are harrowing ones, given the full scope of presidential power. Trump will not go quietly and the chaos will escalate before this is all over.