Who in the hell is Sarah Huckabee Sanders?! Everything you were afraid to ask about this suddenly important person

Now that Sean Spicer seems to have been unpersoned, Trump's hatred of the press is filtering through her frown 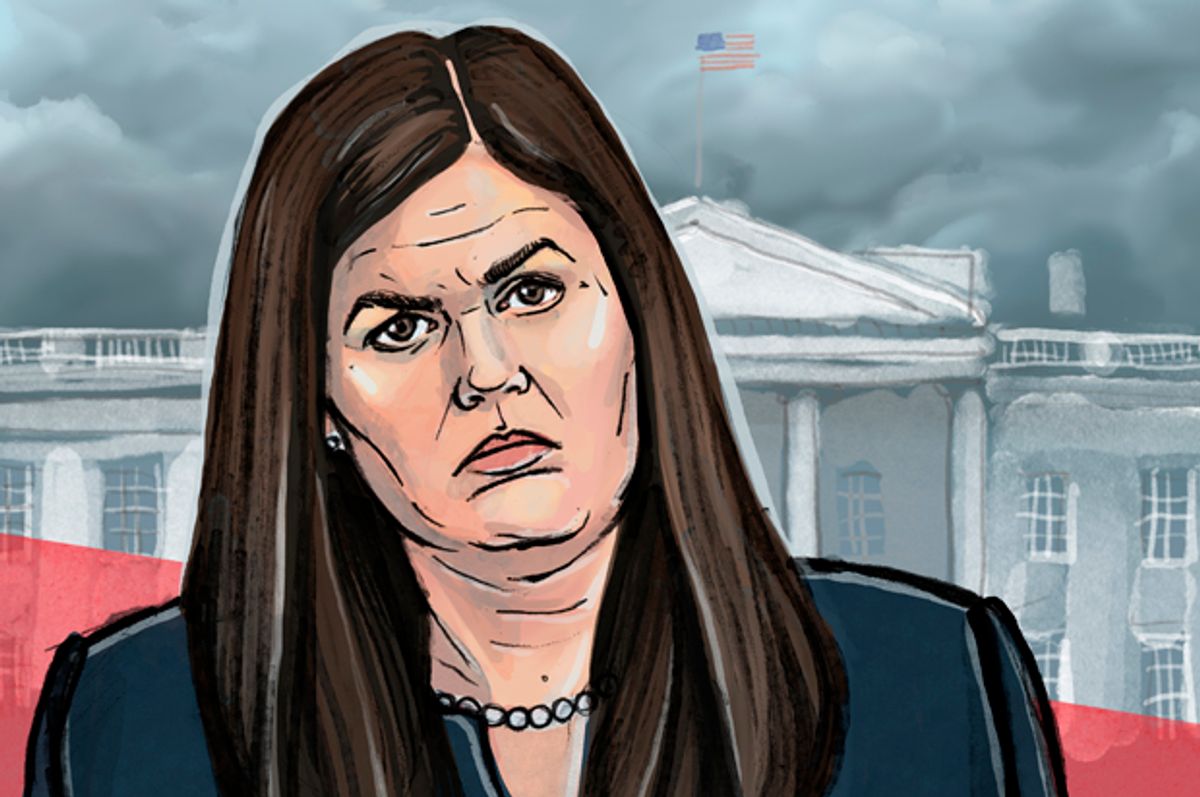 Sanders attended Ouachita Baptist University in Arkadelphia, Arkansas, where she was elected student body president and co-founded the Young Conservative Nepotism Society with herself. (Ouachita is a Native America term, meaning “keno parlor.” )

At nine, she borrowed her mother’s driver’s license so she could sneak into a Little Rock nightclub and see Gennifer Flowers' cabaret act. She was escorted out by state troopers just before Ms. Flowers launched into her opening number, “The Man That Got Away.”

In 2004, she worked as a field coordinator in Ohio for President George W. Bush’s reelection campaign. In Ohio. Yeah, Ohio. On January 22, 2009, President Bush’s first day back at his ranch in Crawford, Texas after leaving office, she sent him a pre-fabricated tool shed made from 122,000 uncounted ballots.

A NARCISSIST CALLS: When her father dropped out of the race for the Republican nomination in 2016 after polling poorly in his living room, Sanders signed onto the Trump campaign as an advisor and was put in charge of communications for coalitions. She also appeared on CNN as a campaign spokesperson whenever the network specifically requested a hinged version of Katrina Pierson.

Following the election, she was named deputy press secretary under Sean Spicer. She first filled in for her superior at a White House press briefing May 5, when Spicer was fulfilling a commitment in the Naval Reserve. She replaced him again two weeks later when Melissa McCarthy’s Friday flight to Kennedy was cancelled.

In the last two months, Sanders has overseen several press briefings, the vast majority of which are off camera and do not allow questions about Russia, James Comey, Mika Brzezinski or bronzer.

Starting next month, the White House will expand its press briefing conditions to include the following. Monday: No cameras. Tuesday: No cameras, no tape recorders. Wednesday: 30 minutes of silent meditation. Thursday: All questions must be submitted via Pictionary. Friday: 12 seconds in, Barron pulls the fire alarm.

EXACTLY WHAT DO YOU MEAN FAKE? During the June 27 press briefing, Sanders accused the media of spreading fake news against the President. As an example, she cited a video created by James O’Keefe, a conservative activist and filmmaker who regularly edits his work to misrepresent liberal causes and who pled guilty in 2010 to entering Democratic Senator Mary Landrieu’s office under false pretenses. During the 2016 election, O’Keefe’s Project Veritas received a $10,000 contribution from the Trump Foundation, which uses money solicited from other charitable foundations to create the impression that it is the one making the charitable donation. So, there is a logical explanation for all of this. Everyone back to your seats.

Sanders has come under criticism for vigorously denying accusations that have never been made. Last week, she insisted the proposed Senate health care replacement plan did not include a provision to defund Bristol Palin.

PRESIDENT TRUMP ON SANDERS: “Good gal. She’s a good gal. Her dad couldn’t keep the weight off, which is a weakness. Good guy, but weak. I’m not crazy about some of the tops I’ve seen her wear. Not crazy about the tops. But that’s why we have the Constitution. You want to wear a top that looks like a Korean board game, that’s your business. Unless it’s mine. I’ve done business in Korea, with the good ones. The good Koreans. The ones in the West. No one ever talks about West Korea. Just me. And that’s what everyone is drawn to. That’s what everybody is talking about, okay? Okay? Now, here’s something I don’t understand. And I’m not afraid to admit that I don’t understand it. It’s a little thing called extreme humility. Why, all of a sudden, is my son getting all the attention? Why is everything 'Junior this' and 'Junior that?' He answered an email? Like I can’t answer an email? What did he do that was so great? What did he win? Who put this thing together? All of a sudden, I can’t answer an email and I’m invisible? Let me say this. Let me say, excuse me, but let me just say, I think my son would be a model prisoner. Absolutely. Model prisoner. And if everybody was talking about that, which I’m not saying they wouldn’t, but if everybody was talking about that, Russia for instance, that would be something.”

NICE CREDIT: In 2010, Sanders was named one of Time Magazine’s “40 under 40” in politics. And she’s proud to point out that was an issue of Time that actually existed.