From "Pride and Promiscuity" to "Virtues and Vices," a look at the Regency Era's decades-long steamy reappraisal 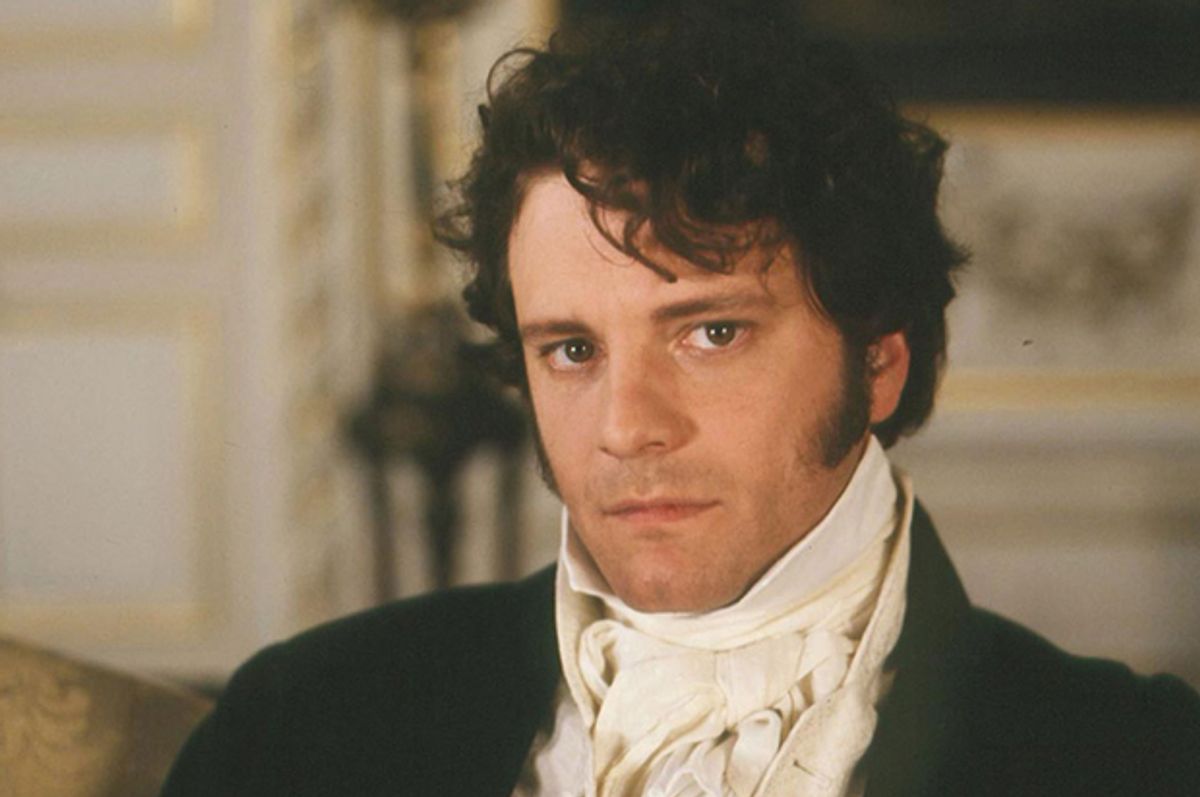 Colin Firth as Mr. Darcy in "Pride and Prejudice" (BBC)
--

“It is a truth universally acknowledged, that a dominant man in possession of a good set of cuffs, must be in want of a much younger, submissive wife.” So begins "Spank Me, Mr. Darcy" (2013) by Jane Austen and Lissa Trevor.

Colin Firth’s performance in Andrew Davies’s BBC "Pride and Prejudice" (1995) is usually credited with Austen’s turn toward the titillating. As a headline once trumpeted, “Thank the BBC for Jane Austen Erotica.” But things were getting steamy for Austen long before Davies and Firth came onto the scene, as I describe in my new book, "The Making of Jane Austen." Smoldering actor-Darcys date back as far as the pioneering "Pride and Prejudice" stage adaptation of 1935 by Helen Jerome. That hit Broadway play ended with a lust-filled Darcy grabbing a weepy Elizabeth, declaring her cruel, kind, and lovely, and “folding her close” “his lips on hers.” Curtain.

A passionate stage kiss is just that, of course, but more sexually explicit fare would follow. As we try to come to grips with Austen’s longevity and iconicity in this, her bicentenary year, we ought to examine what the most blatantly sexed-up Austens mean. It’s a longer, hotter, and weirder history than we’ve previously realized.

Two kinds of Austen erotica have flourished in the 21st century: send-up and straight-up.

The send-ups goes for humor by juxtaposition, playing Austen off of her prim reputation for laughs or shock value. "Pride and Promiscuity: The Lost Sex Scenes of Jane Austen" (2001), by Arielle Eckstut and Dennis Ashton, spoof-claims finding a hidden cache of her lewd writing. The "Jane Austen Kama Sutra: A Playful Presentation of Sense and Sensuality" (2016) features compromising silhouettes, accompanied by double-entendre Austen quotes, like “I will be mistress of myself” and “Men never know when things are dirty or not.” Vulgar Regency silhouettes may or may not be to your taste, but they certainly take a bold step beyond the naked lady posed on the mud flaps of pick-up trucks.

Whether or not it’s a low is open to question, but it’s definitely not new. A now little-known novel, Grania Beckford’s "Virtues and Vices: A Delectable Rondelet of Love and Lust in Edwardian Times" (1980), appears to be the very first example of the genre. Beckford’s libidinous tale moves Austen’s plot forward a century from Regency to Edwardian England. It forgoes today’s ubiquitous "Pride and Prejudice" for "Persuasion," specifically the widow-neighbor Lady Russell and vain widower Sir Walter Elliot, who is renamed Sir Wilfred. Literally everyone in Beckford’s novel is having sex with everyone else — men, women and even children. There is every kind of vice but little in the way of virtue. Austen-inspired pedophilia and incest move Beckford’s novel far away indeed from contemporary mommy erotica. Beckford makes "Fifty Shades"-inspired Austen fare seem completely garden-variety by comparison.

The sex acts that "Virtues and Vices" narrates are often abusive and illegal, yet the novel was, oddly enough, going for humor. The book flap describes it as a “sophisticated comic romance.” Because its stories are told in the first person in the voices of many different characters, a moralizing narrator never weighs in to judge something right or wrong. Rakish Sir Wilfred Elliot is said to have a bedroom of wall-to-wall mirrors. The little detail of his be-mirrored estate is lifted out of Austen’s original, but the rest is Beckford’s embellishment. Readers learn about Sir Wilfred’s bedroom mirrors through his widow-neighbor Lady Russell’s description of cavorting with him in front of them. She watches her lover admire the size of his own member in reflection. It’s a perfectly chosen comic X-rated detail to elaborate on the original novel’s exploration of his vanity.

Other chapters, too, take small bits from Austen’s original and amplify them into darkly comic sexual exploits. The chapter narrated by the flirtatious Louisa Musgrove (renamed Lucinda) describes her doing it with hero Wentworth in clichéd, florid language. The manipulative widow Mrs. Clay is revealed not to be lawyer Mr. Shepherd’s relative but his former lover. Even Lady Russell has an affair with “Kevin” Wentworth. She’s a discreet lover, which matters greatly because she’s also sexually involved with his heroine and future wife, Angela Elliot, renamed from Austen’s Anne. The oldest Elliot daughter, Edwina (Elizabeth in the original) describes her sexual relationship with her father, including a game in which she nurses him like a baby at her bosom. The book sets out to make readers deeply uncomfortable. And yet in between the in flagrante delicto moments are references to all manner of literary texts and authors, including Rudyard Kipling, William Thackeray, Charles Dickens, and Gustave Flaubert. Jane Austen’s name, however, is never mentioned.

Never mind Wambaugh. Who was Grania Beckford, that nausea-inducing innovator? The "Virtues and Vices" book flap describes her as a divorcée “born third-six years ago in Ireland” and a “citizen of the world.” The publisher adds, “She has a wide knowledge of history with a special love for the luscious Edwardian epoch,” with her previous novel given the capsule description of “‘Upstairs, Downstairs,' porno-style.” Beckford herself is quoted as saying, “I live out of a suitcase, with a portable typewriter, off alimony, and under a cloud.”

But Grania Beckford wasn’t a woman. Beckford was one of the many pseudonyms of the late Roger Erskine Longrigg (1929–2000). (It seems important to stop here, for just a moment, to enjoy the absolute perfection of Austen’s pioneering first pornographer being a man whose given names were “Roger” and “Longrigg.” To make it even more perfect, his brother, Johnnie Longrigg, was an MI6 spy.) Roger Longrigg was a prolific novelist of some fame and infamy. He published 55 books of genre fiction under at least seven pseudonyms, bursting onto the scene by successfully duping audiences into believing he was a female teenager named Rosalind Erskine. As Erskine, he published a novel about boarding school girls turning their school gym into a brothel, "The Passion Flower Hotel" (1962). It became a bestseller, was made into a musical, and gave Nastassja Kinski her first German film role. But Longrigg’s ruse of being a teenage girl-author lasted only three years. When his cover was blown, he went on to other pseudonyms.

What does it all mean, then, the contemporary tussle between Naughty Austen and Prim Austen? If these versions of her have been jockeying for position for forty years, the smackdown cannot really be all that momentous to her reputation going forward from here. Granted, some change is afoot. As we become more accustomed to juxtaposing Austen with sex, booze, and blood (e.g. sex, wet white shirts, the Austen-branded Bath Gin, vampires, zombies), it must shift expectations. It only stands to reason that the more proximate Austen is to vice, the less she’ll seem to represent virtue. For the moment, however, the virtue-inspired Austen homages are flourishing, too, if not word-for-word and dollar-for-dollar.

The recent flurry of Austen erotica is arguably also changing how we read prototype Austen now. Sexed-up adaptations encourage us to imagine that illicit activity lurks around every character and corner, every nook and cranny, and every sly line of Austen’s originals. Such things are no doubt sometimes there, but are they everywhere? The popularity of this genre makes it difficult to conclude that her cigars may ever be just cigars, her toothpick cases ever just toothpick cases.

Yet if the long, complex history of Austen’s legacy shows us anything, it’s that starkly opposing visions and versions stick to her and have stuck with us for nearly two centuries, showing no sign of settling down. With past as prologue, we should move forward with the confidence that as long we keep reading the original texts, our debates about her primness or sexiness will hardly be “settled.” That’s as it should be. In a May 14, 1813 letter to her sister Cassandra, Jane Austen wrote, “If I am a wild Beast, I cannot help it.” For better or for worse, for richer or for poorer, the X-Rated Austen phenomenon gives us new ways to read and enjoy that line.

Devoney Looser is Professor of English at Arizona State University and the author, most recently, of "The Making of Jane Austen" (Johns Hopkins University Press), a Publishers Weekly Best Summer Book (Nonfiction). Her recent writing on Austen has appeared in The Atlantic, The New York Times, Salon, The TLS, and Entertainment Weekly, and she’s had the pleasure of talking about Austen on CNN. Looser is one of the quirky weirdos featured in "Among the Janeites: A Journey Through the World of Jane Austen Fandom" and has played roller derby under the name Stone Cold Jane Austen.