How high-cholesterol foods can ruin your sex life

Maybe hold off on that bacon cheeseburger deluxe 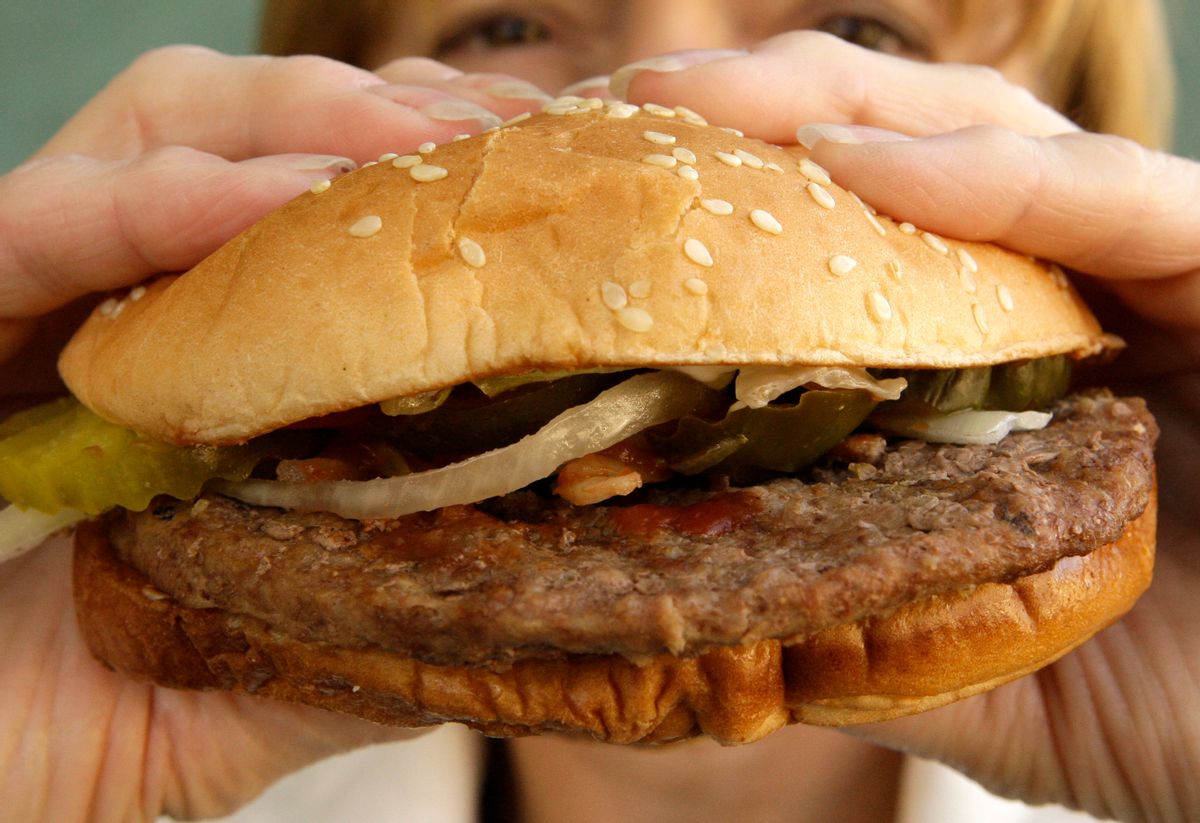 Two of possibly the greatest joys in life are food and sex. You can enjoy both separately or together, by yourself or with a partner (or group) and in general, each tends to complement the other rather well. That is, until one day they don’t. The reason? Put simply, it comes down to that dreaded C-word.

Cholesterol: adversary to your arteries, the harbinger of heart-attacks, and you may be surprised to learn, an eradicator of erections. Before we get to that, though, let’s start with what this accursed stuff actually is.

Cholesterol, explains Boston Medical Group, is “a waxy, fat-like substance” that travels around the body in blood particles called lipoproteins. There are two versions of cholesterol, the ‘good’ kind and the ‘bad’. The first one, known as HDL, travels in the blood directly to the liver where it is broken down and used by the body. The bad one, LDL, travels through our arteries leaving a trail of plaque that damages, and ultimately blocks blood flow. This condition is called atherosclerosis, and is a precursor to heart attacks, strokes and, yep, you guessed it, erectile dysfunction.

An excess of cholesterol can lead to a complete blockage of the coronary artery, which will trigger a heart attack. Too much bad cholesterol (also known as LDL) in the bloodstream creates arterial plaque that damages and blocks blood flow. These blockages will result in inadequate circulation of blood throughout the body, which includes your ‘nether regions.’

So, what exactly does that imply for your sex life? Time for a little human biology lesson.

During the act of “sexual stimulation,” Boston Medical Group explains, “the body releases chemicals that cause the penile arteries (corpora cavernosa) to relax.” Basically, in the heat of the moment, your arteries relax allowing for better blood flow and, of course, the more visible physical attributes associated with having an erection.

By now you should be starting to connect the dots. The long and the, er, short of it is that reduced blood flow caused by the high presence of LDL cholesterol is directly linked to sexual disorders such as erectile dysfunction.

Dr. Michael Krychman, the executive director of the Southern California Center for Sexual Health and Survivorship, told Fox News that "as soon as a man presents with erectile dysfunction, we begin measuring cholesterol and blood pressure." Krychman added that furthermore, the same mechanisms through which men may suffer from sexual disorders caused by high cholesterol, hold similar effects for women.

"In the past we used to think if a woman is having sexual problems, she’s frigid, and she needs to go home and have a glass of wine and relax," Krychman said. "However, there is emerging data associating underlying medical causes with female sexual dysfunction." In the case of women, Krychman explained, the fatty deposits caused by high cholesterol affects lubrication and libido.

Beyond blockages, LDL cholesterol also inhibits the production of nitric oxide, the artery-relaxing hormone required to produce an erection. LDL does this by reducing the artery’s response to the hormone, which in turn decreases blood flow. And that’s not the only hormone affected by high cholesterol. Production of testosterone — which helps stimulate sexual drive in men — is also limited by high cholesterol-caused lowered blood flow to the testicles, where the hormone is produced.

Now that we’ve covered the problem, let’s look at ways to go about finding the solution. For starters, Krychman said, if you believe your high cholesterol is affecting your sex life you should consult a physician. In an article on Healthcentral, the author reiterates Krychman’s point noting that “men who develop erectile dysfunction without an obvious cause, such as from medication or physical injury, may have a 25% increased risk of cardiovascular disease over the next 5 years.”

There are generally three basic ways to go about combating high cholesterol: diet, exercise, and medication.

In terms of diet, most physicians will generally suggest cutting out saturated fats. This Alternet article, for instance, suggests nine ways you can increase the presence of “good cholesterol” (HDL) in your diet. By enjoying a low carb diet, avoiding trans fats, and doing regular exercise, explains the author, a person can greatly reduce their risk of heart disease, and in turn, reduce the effects that cause erectile dysfunction. For more diet tips, here’s a list of 14 other foods that help with circulation.

This 2013 study, published in the journal Medline, looked at erectile function in relation to men’s weight loss. Drawing on data from “145 sexually active overweight/obese men,” the study found that “dysfunction level improved with a small weight loss - even for men who did not have clinical dysfunction,” co-author Clare Collins, a professor of nutrition and dietetics at the University of Newcastle, told Alternet via email. The study further found that overweight men were more likely to suffer from erectile dysfunction.

“The main message is that improving your eating habits so that you drop a small amount of weight can improve your sex life,” said Collins, adding the important reminder: “talk to your doctor if you’re experiencing erectile dysfunction.”

The main reason for this last bit of advice comes down to medication. Suzy Cohen, a pharmacist writing for Lifescript, points out that high cholesterol and erectile dysfunction — which are often experienced together — remain two separate conditions requiring different treatment. “If you have ED,” Cohen notes, “assume (until proven otherwise) that you have mild heart disease or pre-diabetes.” As such, she continues, simply taking lipid lowering medications that bring down your cholesterol levels may still hold negative effects for erectile function, due to a lack of hormones.

Statins are a type of medication known for lowering cholesterol, and through that process helping to reduce heart disease. According to the findings of a 2014 study published by the Journal of Sexual Medicine, statins might also help benefit men with erectile dysfunction.

In the past, research had shown that statins had a negative effect on testosterone levels. This meant that many physicians questioned the efficacy of cholesterol-lowering medication when it came to improving sexual health. But a 2014 study by researchers from the cardiovascular research department at Rutgers University’s Robert Wood Johnson Medical School proved differently.

For the study, researchers conducted a “meta-analysis” of previous studies on erectile dysfunction and statins. 11 trials that measured “erectile function using the International Index of Erectile Function” (IIEF) were identified for analysis following a “systematic search” of MEDLINE, Web of Knowledge, the Cochrane Database, and ClinicalTrials.gov.

What’s the IIEF? The IIEF, taken from self-administered survey results, are a set of five questions, scored on a five-point scale that when totalled either indicates a low number, indicating poor sexual function, or the opposite.

Overall, the analysis revealed that their was statistically significant proof that statins caused a “clinically relevant improvement of  erectile function as measured by the five-item version of the IIEF” in men who had both high cholesterol and ED. Specifically, the study found that, overall, IIEF scores rose by 3.4 points in men who took statins compared to the control, which represents a 24.3 per cent improvement.

“The increase in erectile function scores with statins was approximately one-third to one-half of what has been reported with drugs like Viagra, Cialis or Levitra,” Dr John Kostis, the director of Rutger University’s Cardiovascular Institute who lead the study, said in an article in the Daily Mail. “It was larger than the reported effect of lifestyle modification. For men with erectile dysfunction who need statins to control cholesterol, this may be an extra benefit.”

Kostis went on to explain the team’s understanding of their findings to the Daily Mail. They believe that the statins help to improve erectile function by assisting with blood vessel dilation, which in turn improves vascular blood flow to the penis.

“Ultimately, a healthy lifestyle is the best method to prevent disease, including erectile dysfunction," said Kostis, adding that although statin therapy may only help some people suffering from ED, in the long-run it has been proven to reduce your chances of experiencing cardiovascular disease.

“Rather than preventing the possibility of a heart attack in the future,” he said, “the more immediate benefit of improving erectile function might improve adherence to statin therapy.”

So, at it’s worst statin therapy will only help high cholesterol sufferers with their hearts and at its best, it could also improve their situation in the bedroom. Kostis was sure to add that statins should not be recommended as a primary form of treatment for ED, if patients have healthy cholesterol levels. He added that in order to more fully investigate the link between statin therapy and ED would require a larger trial.

In the end, like most issues pertaining to your health, the best solution requires a holistic approach. If you find yourself with high cholesterol and erectile dysfunction, it’s time to change your ways. Remember, step one: consult your physician. From there, with the right combination of diet, exercise and medication you could keep enjoying those great fruits of life, long into your years.