Jay Sekulow: "There was nothing in that meeting that is illegal, against the law" 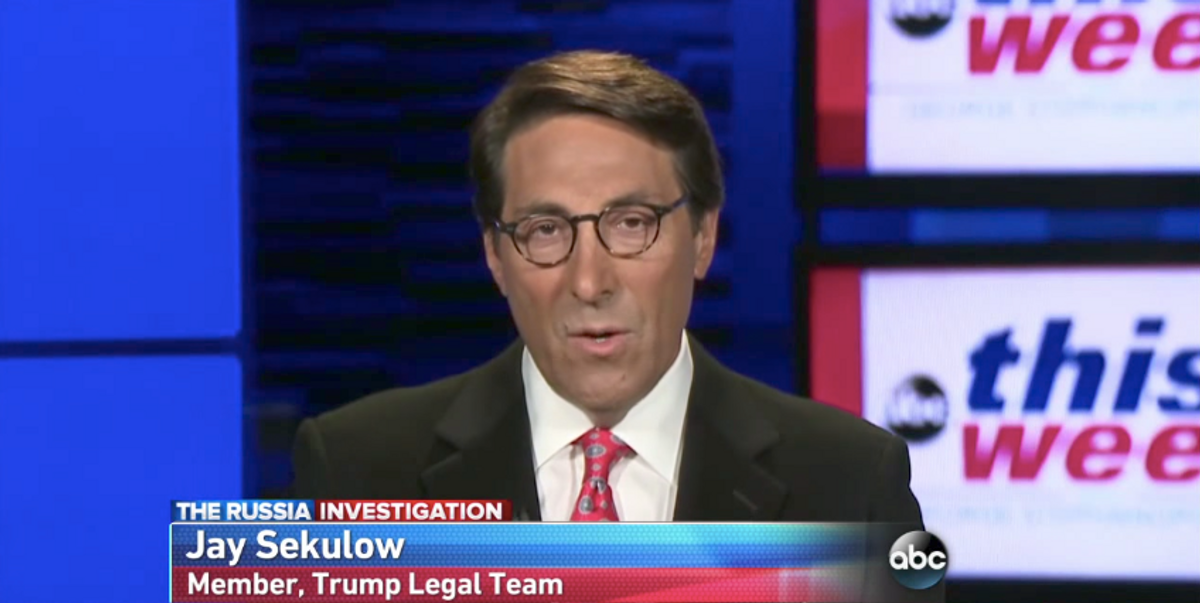 Jay Sekulow, a member of President Donald Trump's legal team, said on Sunday that the June 2016 meeting between Donald Trump Jr., and a Russian lawyer was not "against the law."

Last Tuesday the president's son tweeted an email exchange with former tabloid journalist Rob Goldstone in which he was told that he would be given "very high level and sensitive information" that was "part of Russia and its government’s support for Mr. Trump." Some experts have said that a federal offense was likely committed, even if the president's son didn't actually receive any information. Trump's son-in-law and White House senior adviser, Jared Kushner, also attended the meeting, as well as the campaign chairman at the time, Paul Manafort.

"There was nothing in that meeting that is illegal, against the law," Sekulow told "Fox News Sunday" host Chris Wallace. "The meeting, the discussion was not a violation of the law."

Wallace asked if the previous repeated denials of contacts between Kremlin-connected Russians and the Trump campaign were suspicious, but Sekulow didn't directly answer the question at first. "The question I asked you, Jay, is whether or not the denials are suspect? I didn't ask you about James Comey," Wallace said.

Sekulow appeared on five Sunday morning news shows and had a similar exchange on "Meet the Press" with Chuck Todd. "Mr. Sekulow, I didn't ask you about James Comey. I asked you about the specific email," Todd said, after asking Sekulow if "reasonable people" could conclude that the president's son's email chain was cause for an investigation.

"If there's an investigation you're looking at what law may have been violated here," Sekulow said. "And again, the meeting and what took place at the meeting based on all the information that you just said is not a violation of any law, statute or code."

Throughout his interviews Sekulow continued to insist that Trump had no prior knowledge of the arranged meeting. "The meeting in and of itself of course, as I’ve said before, is not a violation of the law, but I think it’s important to understand that, as counsel to the president, the president was not aware of the meeting and did not participate in it," Sekulow said on ABC's "This Week."