Pixies and the Surrealist continuum

If you want to understand Magritte, Dalí and de Chirico, fire up "Doolittle" 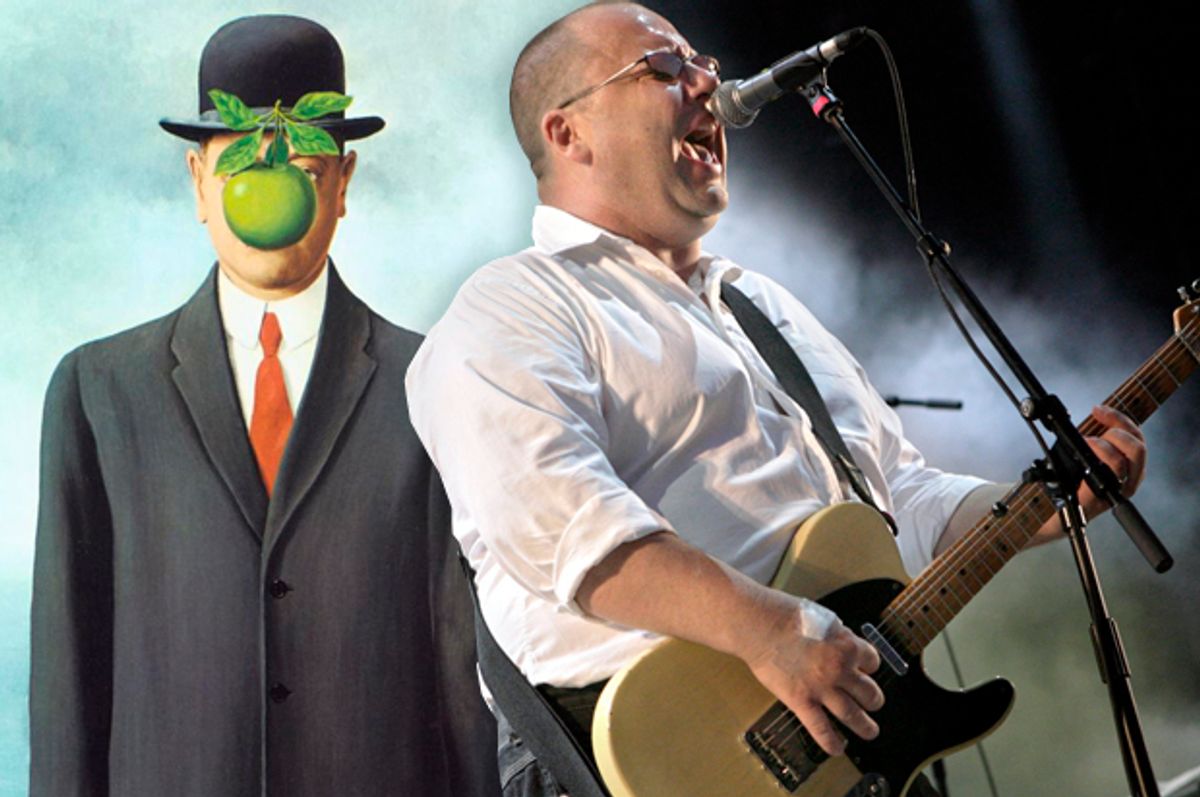 The amount of digital and analog ink that has been spilt by fans trying to decipher the lyrics to the classic Pixies song “This Monkey’s Gone to Heaven” would make a professional critic’s head spin. Is frontman and songwriter Frank Black referencing Old Testament numerology? The “mark of the beast” from the Book of Revelation, 666? Why is God seven? And what on earth does it have to do with a monkey?

Fans approach lyrics to their favorite songs much in the way cultural critics approach complex literature or allegorical painting. Exegeses on James Joyce’s "Ulysses" and Agnolo Bronzino’s "Allegory of Love and Lust" are tackled by enthusiasts outside of classrooms, because they are passionate about the pop music, and intrigued to sift for hidden truths in the opaque lyrics. The lyrics seem to be laden with symbolism, are surely “about” something, probably some great secret, but we can’t seem to come up with a definitive solution. There’s pleasure in picking this apart. A hugely popular, sprawling website, Genius.com (formerly Rap Genius, but now incorporating all genres), consists entirely of fan-annotated lyrics to songs, with participants postulating on veiled meanings. The idea that lyrics should be intentionally unclear, with an emphasis on evocative, memorable images and wordplay, over straightforward storytelling, is both literary and art-historical. What I study, iconography, is the analysis of symbols (what Dan Brown called by the invented name of “symbology,” the specialty of his oft-chased "Da Vinci Code" protagonist, Robert Langdon). Symbols in one art form, painting, shift easily into the analysis of another art form, music. And the godfathers of weird, undecipherable lyrics are Pixies.

Formed in 1986 in Massachusetts, Pixies are one of the most influential rock bands in history. They are best-known for two groundbreaking approaches to songwriting, both of which came organically, without forethought. One was Black Francis' lyrics. He has said, “I’m a Surrealist. For me 1+1=bran muffin.” And indeed he is. When I teach art history, I teach Pixies music as part of the continuum with the Surrealists of the mid-20th century, René Magritte and Salvador Dalí and Giorgio de Chirico.

The most obvious Pixies song to reference Surrealism is “Debaser,” which directly mentions "Un Chien Andalou" (“An Andalusian Dog”), a film by Luis Buñuel and Salvador Dalí that famously begins with a straight razor being drawn across an eyeball. Black Francis sings:

I recently interviewed Black Francis and the rest of Pixies before their concert in Ljubljana — a great thrill for me, as Pixies were the very first band I loved, back when I was 14 — and asked how intentional the Surrealism in his lyrics is.

“I don’t know. I can only say that I understand the puzzle-making aspect of the creative endeavor. Certainly I do that sometimes. I think there’s not really any kind of agenda, if you see what I’m saying, other than to be entertaining. I’m a bit of a reactor, in the moment, personality-wise. So when I’m writing the songs, I’m reacting," he said. "Sometimes thinking when you’re creative can be ping-pong-y, fast, and even though, when you’re in the moment, it all kind of makes sense, this wonderful universe, conspiracy theory, it all links, but that gets lost when the act is over. Then it just is what it is.”

That’s fair enough, and perhaps it is the role of the audience and critics to analyze, not the author himself. That’s certainly what Magritte would argue.

The other great innovation of the band was the dynamic formula for many of their songs: quiet verse, loud chorus, quiet verse. This quiet-loud-quiet pattern was consciously referenced by bands like Nirvana and Radiohead, and was the predominant dynamic for '90s grunge songs. Think of “Smells Like Teen Spirit” and “Creep”; the writers of both songs, Kurt Cobain and Thom Yorke, openly cite Pixies as their main influence. Even Cobain’s lyrics (“A mulatto, an albino, a mosquito, my libido”), which fans comb for clues the way viewers puzzle out the films of that other great modern Surrealist, David Lynch, are born of Pixies. Cobain told Rolling Stone, “I was trying to rip off the Pixies . . . We used their sense of dynamics, being soft and quiet and then loud and hard.”

The original Surrealists, the group built around the literary works of André Breton, the films of Luis Buñuel, and the paintings of Dalí and Magritte, were interested in projecting the unconscious in art. Art was a way to dip into the well of the world of dreams and secret thoughts that we cannot articulate. The Surrealists’ overt influences were Freud and the Marquis de Sade. But there was another component, most evident in Magritte’s work and commentary, or rather refusal to comment, on it. Magritte felt that the world was too ordinary, quotidian, repetitive, and that it was the duty of art to reinject a sense of mystery, wonder and awe into life. He liked to provoke the sensation that you are trying to solve a mystery, complete a puzzle, interpret a riddle. But the moment you feel you’ve successfully “solved” it, the sensation of immersion in a magical world, of unpuzzling, is lost, and you return to your daily life. This is what he wished to avoid, to discourage.

And so Magritte refused to accept any interpretation of his work, even a reasonable one that an objective analyst, psychoanalyst or critic might consider legit. For example, in his painting "Son of Man," which shows an anonymous businessman with a giant apple obscuring his face, the theological/art historical “correct” interpretation for this painting would be that the title is a Christological reference and the apple is the Forbidden Fruit. Christ was created in order to die, and in dying reverse Original Sin, which was provoked when Adam took a bite of the Forbidden Fruit (traditionally shown as an apple) and was cast out of Eden. Thus each of us “carries the cross” of Original Sin, wears the apple upon us. If one of my students wrote something like that on a test, I’d be satisfied. Not Magritte. He would either deny that this was the correct interpretation, or would offer a “maybe.” The point was that no one should feel they got it definitively, for that would defeat the purpose.

David Lynch’s work offers a parallel in film. Reams have been written trying to provide an interpretational superstructure for "Blue Velvet," "Mulholland Drive" and, most famously, "Twin Peaks," a practice that has come back in full swing this year with the show's revival. But there is no “solution,” or at least Lynch never consciously designed one. "Mulholland Drive" began as a short film and was extended to feature length, with Lynch adding layers of intrigue and mystery without ever planning a final interpretation that sewed together the loose ends. The mystery of Laura Palmer's killer in "Twin Peaks" isn't a straightforward whodunit. For these artists, the point is the journey without a final destination.

And so too, it seems, with Pixies songs. At least according to Black Francis. He has said, “I didn’t have the attention span to read Surrealist novels, but I like the 20-minute films.” But I wondered, did he realize that he is continuing in the Surrealist tradition? “He’s not closely associated with the Surrealists, but Miró is my favorite," he told me. "I like [Magritte, Dalí, de Chirico] all for different reasons. Because of things like Surrealism or Dadaism, having such an impact on modern culture . . . even people who have never seen a Picasso, for example, have a cultural vocabulary that lets them understand that something is Picasso-esque, because it has had such a huge influence on the modern vocabulary."

"That’s good that Surrealism has taken such root and has grown into the culture," he added. "It’s interesting to think how far people’s understanding of what Surrealism is has moved away from the original concept, which in my mind is more related to the tapping into the unconscious or dream state. In 2017, Surrealism means just any old weird thing.”

These sort of responses, friendly but noncommittal, only strengthen my impression that Black Fancis and David Lynch and René Magritte are cut from the same cloth. Pixies are among the greatest of the Surrealists — in influence, in popularity, in art.