Fact or Fiction? A Shakespeare expert takes on TNT's "Will" 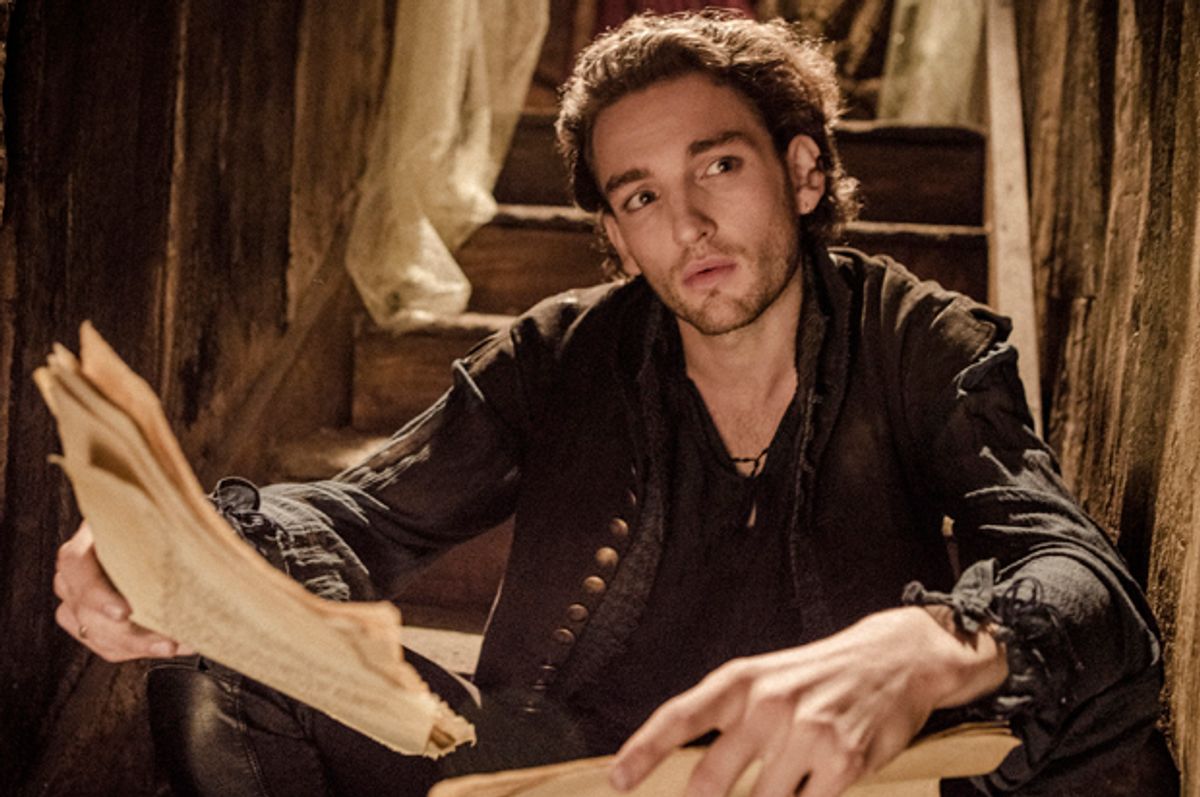 Laurie Davidson as William Shakespeare in "Will" (TNT/Aidan Monaghan)
--

“The course of true love never did run smooth,” as William Shakespeare famously wrote in his legendary comedy “A Midsummer Night’s True.”  That truth is as applicable to an audience’s reception of a new television series as it is to the human heart, with the latter playing an important role in shaping the opinions of the former.

As TNT is discovering with the introduction of its new series “Will,” sometimes taking a bold creative swing with interpreting literary history doesn't win over the groundlings.

“Will,” airing Mondays at 9 p.m., stars Laurie Davidson as William Shakespeare and filters the story of his young adulthood, about which relatively little is known, through a rock-and-roll perspex, transforming the world of 16th-Century London theater into a punk-rock stage.

Created by screenwriter Craig Pearce, “Will” came to TNT with its own bit of whirlwind history as a title was under consideration at HBO before landing straight-to-series order at Pivot, a millennial-targeted network that has since been shuttered.

For all the sound and fury leading up to its recent series premiere, “Will” drew a same-day audience of 633,000 total viewers, a total that slipped to 477,000 viewers in its second hour. The drama’s ratings fortunes may improve once a week’s worth of DVR viewing date is factored in, but unfortunately these numbers mean “Will” has earned the dubious title of the lowest-rated TNT drama series premiere ever.

Perhaps has been lost in the translation between Pearce’s interpretation of the Bard and the American viewer. Sure, that’s possible. But just in case, Salon consulted Shakespearean scholar Paul Edmondson, to get his take on the series.

Edmondson, the Director of the Stratford-upon-Avon Poetry Festival and the head of research for The Shakespeare Birthplace Trust, viewed the same four episodes that were made available to critics and to his credit, was more fair in his assessment of “Will” than foul.

Edmondson, by the way, is a champion of all for things that have the potential to keep Shakespeare’s work alive and relevant to every generation. He’s an expert, but he’s also a keen observer of stagecraft, setting and language, all components Shakespeare’s contributions to literature continue to shape today on the stage as well as in the creation of film and television scripts.

Edmondson goes on to salute the drama’s interpretation of Shakespeare’s career trajectory. “We've got an opportunist and we've got somebody who for a modern age is charting a rise to celebrity. And this is very empowering,” he observed. “Will's having to use very much all of his wit to produce this stuff. He's not a natural genius, which I quite admire the program for showing a certain, new dimension to where his talent came from.”

As for other elements of the presentation, Edmondson summed it up as “where Merry England meets The London Dungeon.” For those unfamiliar with London’s better-known tourist traps, The London Dungeon is a walkthrough experience in which actors lead customers through scenes of famous crimes and the odd visual featuring some of ye olde England’s more lurid torture methods.

And the “merry England” element, Edmondson explained, ”is really a way of patronizing the past. It's where everything's just jolly and it's safe and it's bright and it's vivacious and it's you know we feel attracted to it.”

Edmondson’s description refers to a subplot in “Will” that involves crown agent Richard Topcliffe (Ewen Bremner) and his maniacal pursuit of Catholics like Shakespeare, and the unfortunate suspects who fall into his custody tend to be subjected to interrogation methods they don’t survive.

Edmondson explains that this subplot about the secretly Catholic Shakespeare refers to a topic that was popular in research circles about 15 years ago that has since fallen out of fashion. But, he added, “the story handled that narrative very well. I found it to be an compelling throughline, and one way of bringing unity to the thing because with that you get the torture, which I thought was gratuitous.”

Topcliffe, by the way, is one of many actual historical figures repurposed to serve the arc of Will’s rise to fame in the London theater scene, an element of the series with which Edmondson takes issue. The real Shakespeare fostered a close professional connection with the Burbages, but the show’s portrayal of Burbage's daughter Alice (Olivia DeJonge) helping Will write the plays, Edmondson said, is nonsense.

“If anything that might do some damage,” Edmondson observed. “It might put the story out there among young people that Shakespeare collaborated with Richard Burbage's daughter, if they read the show literally. Because there's just enough in it to give it some credibility.”

To be clear, Edmondson says he has no problem with the anachronistic flourishes permeating “Will.” A number of respected Shakespearean theaters successfully transport the Bard’s work into a variety of eras, and even interpret the somewhat obscure history Shakespeare’s life honorably.

The most famous example of the latter is 1998’s “Shakespeare in Love,” which has graced many a stage since it won the Oscar for Best Picture.

“It exaggerates the past,” Edmondson added. “And you know, its London is a place of bright egos and adventure. Maybe that's what the television public wants.”

That remains to be seen.