Budd-Falen has a history of attacking environmentalists, federal agents and protected species like the gray wolf 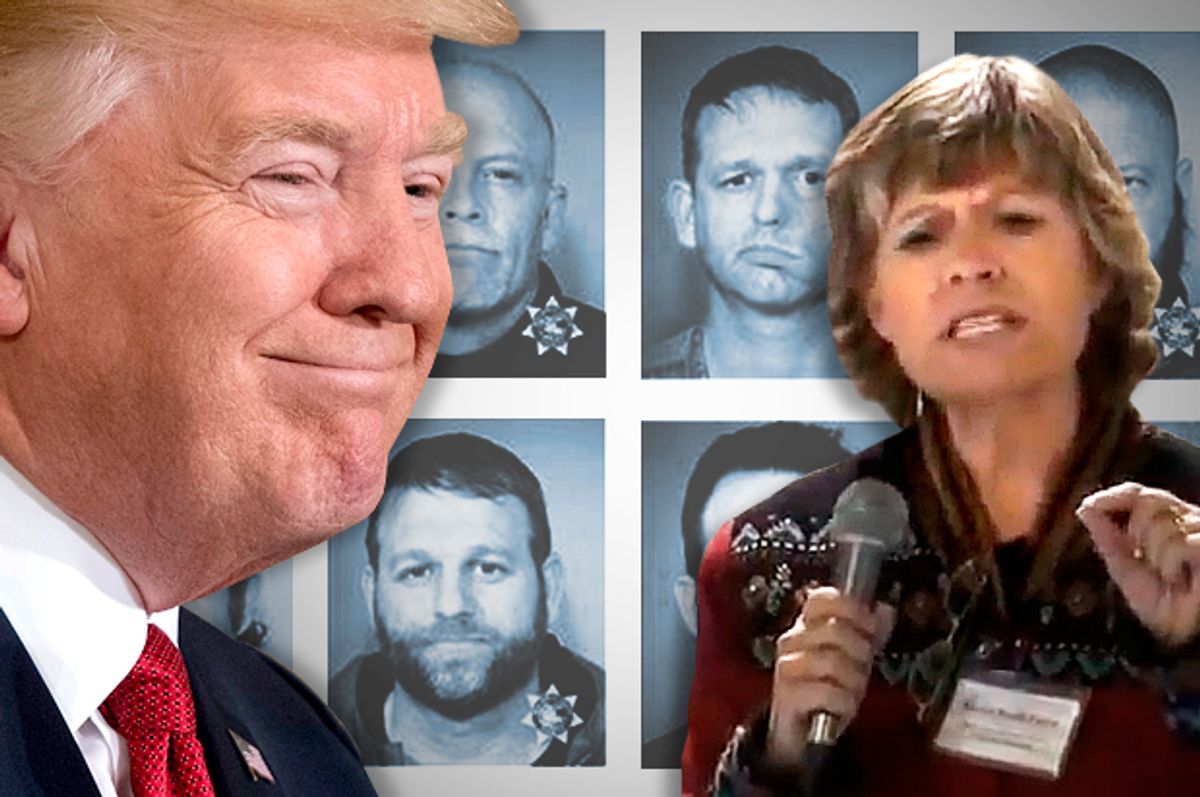 During the presidential campaign, Donald Trump rejected the radical anti-federal land movement, made famous during the Bundy family occupation of the Malheur National Wildlife Refuge. Trump claimed to hold the more mainstream view that federal lands should stay in public hands and he picked former Rep. Ryan Zinke, a Montana Republican who likes to compare himself to conservationist Teddy Roosevelt, as interior secretary.

In the months since he took office, however, Trump has done nothing but defy the promise to protect and preserve public lands. That began with the president's unprecedented executive order calling on Zinke to "review" the national monument designations of the Obama administration and continued with his nomination of energy industry lobbyist David Bernhardt as deputy interior secretary.

But always seems to be true with Trump, things could get even worse. Journalists who cover environmental issues in the western United States, along with some environmental activists, believe that Trump is considering a Wyoming lawyer named Karen Budd-Falen, who worked on the presidential transition team, as director of the Bureau of Land Management (BLM), a federal agency that controls almost 250 million acres of publicly owned lands.

The appointment of Budd-Falen at BLM would demonstrate that the Trump administration is embracing a right-wing fringe movement that is hostile to conservation efforts on federally owned lands and, in many cases, objects to the idea that the federal government has any right to own land at all.

“This is probably one of the worst picks he could possibly come up with to head the BLM," explained Athan Manuel, director of the Sierra Club's Lands Protection Program.

“She’s very ideological, and does seem to be completely offended by the concept of federal lands," he added.

Budd-Falen's name is not as famous as that of the Bundy family, which has had two stand-offs with federal authorities in their efforts to deny the rightful existence of publicly-held lands. But she may be more dangerous, and not just because she has represented Cliven Bundy in his anti-conservation efforts in the past.

Budd-Falen is one of the original creators of "the prevailing ideology of the Bundys and all the folks that showed up at the Bundy ranch a few years and then went to Malheur two years ago," explained Greg Zimmerman, deputy director of the Center for Western Priorities.

As Zimmerman outlined in a recent blog post, Budd-Falen is behind an effort — starting in the 1990s in Catron County, New Mexico — to declare that county officials should have greater power than federal authorities in controlling BLM-owned lands.

In my conversations with environmental activists, what was really striking was not just Budd-Falen's extreme hostility to the very idea of public land ownership, but her commitment to a politics of personal destruction against those who disagree. Throughout her career, Budd-Falen has set her sights on anyone working on conservation efforts, trying to ruin them financially or even have them legally classified as criminals.

"Budd-Falen has made a career out of defending some of the most radical and extreme public lands abusers, while denigrating dedicated civil servants and citizen activists for doing their job," explained Josh Osher, the Montana director for Western Watersheds.

Osher should know. While he personally has had limited contact with Budd-Falen, his organization has been a primary target of her efforts to end conservation efforts by harassing and bankrupting environmentalists in hopes they will just give up.

In 2014, Budd-Falen, on behalf of 15 Wyoming landowners, sued Western Watersheds and its Wyoming project director, Jonathan Ratner, for trespassing. She didn't bother to argue that Ratner had done any harm by passing through private lands on his way to public lands. Instead, as Ratner told me, Budd-Falen seemed to be using the court system in an effort to bankrupt Western Watersheds, and end its work fighting for clean waterways on public lands.

Ratner drew Budd-Falen's attention after he spent a couple years testing pollution levels in water on public lands. What he found was that, because of all the cattle grazing in the area, levels of E. coli in Wyoming streams were far higher than federal regulations allowed. Pro-agriculture forces in the Wyoming state government reacted by seeking to conceal the problem through a series of laws banning data collection, which continue to get litigated in court.

But Budd-Falen's approach was to destroy Ratner and Western Watersheds through this nuisance lawsuit accusing him of trespassing. She hardly even tried to hide her intentions, reportedly bragging in 2015 to a group of ranchers that "one of the funniest things I’m doing right now" is that she "figured out a way to sue Western Watersheds Project."

Her efforts to financially ruin the group didn't work. The judge in the suit forced the parties into settlement, and Western Watersheds was shielded from paying out the massive punitive damages intended to bankrupt it.

This is hardly the only ridiculous case that Budd-Falen has brought forward in her efforts to undermine the federal government's right to own and preserve western lands.

"In 2007, she sued BLM employees under federal racketeering laws that were originally intended to combat Mafia groups," explained Zimmerman.

In that case, Budd-Falen sued BLM officials -- that is, officials at the agency she may soon be leading -- for pressuring a local ranch owner to let them use the road through his property. Most property owners in the West don't blink at letting people drive through their property, but the plaintiff in that casse, Frank Robbins, is an anti-conservationist with a grudge against the government. With Budd-Falen's help, he claimed that BLM pressure amounted to criminal racketeering under RICO laws, a claim that all nine Supreme Court judges rejected.

These legal losses led many of the sources I spoke with to question Budd-Falen's competence as a lawyer, since she so frequently pursues legal arguments, such as her claim that county authority supersedes federal authority over federal land, that collapse in court.

But her inability to construct sound legal arguments, Ratner argued, is no reason to underestimate her.

“For what she lacks in intelligence, she definitely makes up for in drive and hatred," Ratner said, emphasizing that he has tangled with Budd-Falen for 15 years now. “She is relentless and dogged in her pursuit of, essentially, destroying those who want to protect public lands.”

"I think she understands how the levers of power work," Zimmerman argued, "and has the ability to really undermine the work of the Bureau of Land Management.”

As multiple sources noted, just because Budd-Falen often loses in court doesn't mean she's unsuccessful in her business. She is effective at talking ranchers and even county officials into being parties for her lawsuits, and then charges them handsomely for the privilege of losing in court. As long as there's an ideologically driven anti-government movement, there will be rubes who are willing to pay good money to be plaintiffs in failing anti-government cases.

The Government Accountability Office found, however, that only 8 percent of environmental lawsuits resulted in a payout and that the government pays less that $2 million a year under this law. That's a pittance for the federal government, but can help offset the costs smaller environmentalist groups incur for compelling the government to enforce its own regulations on water pollution, for instance.

“Citizens should be able to sue or push back against bad policies on federal lands, and she wants to limit that," said the Sierra Club's Manuel.

Putting someone in charge of the BLM who has argued that BLM employees are no better than criminal gang members is alarming enough. But it's not just humans that could pay the price if Budd-Falen is given charge over the BLM. Animals, too, are in danger.

Budd-Falen has characterized the Endangered Species Act as "a sword to tear down the American economy, drive up food, energy and housing costs and wear down and take out rural communities and counties" and as the "litigation tool of choice for environmentalists." Indeed, her legal relationship with Cliven Bundy goes back to the early '90s, when Bundy and other ranchers hired Budd-Falen as their lawyer in their fight to continue grazing cattle on public lands that were designated for preservation in order to protect an endangered species of tortoise.

Budd-Falen has no more love for larger, furrier animals, either. In 2015, she sued the U.S. Fish and Wildlife Service, demanding a rollback of protections for the Mexican gray wolf. She has also argued for the right of ranchers to kill more wolves.

The only real animals Budd-Falen can be counted on to defend are domestic cattle, which she wishes the government to regard as environmentally harmless, despite their tendency to ravage delicate landscapes and emit huge volumes of methane gas and water-polluting manure. She even denies that cattle's gas emissions contribute to climate change, saying that cow belches are no "different from the internal emissions of cats, dogs or other wildlife".

Actual scientists disagree, estimating that 39 percent of all greenhouse gas emissions from agriculture come from domestic ruminants belching out methane.

Putting Budd-Falen in charge of the BLM would be "tragic," Manuel said, because the agency has only, in recent years, started to "prioritize conservation, tourism and recreation."

Still, he said he wouldn't be surprised if Budd-Falen is appointed at BLM. Such a decision fits into the “larger ethic of the Trump administration," Manuel continued, "trying to take us backwards on every single environmental policy, whether it’s climate change or clean energy or, in this case, public management of federal lands.”

The rumor mill on Capitol Hill suggests that Budd-Falen is pushing hard for this job, but her law office in Cheyenne, Wyoming, did not respond to Salon's repeated requests for comment. Whether Budd-Falen or someone else gets the job, that appointee will likely have to wait until the Senate confirms Bernhardt as deputy interior secretary, a process that has, as with many other Trump appointments, been moving slowly. But Budd-Falen's prominent role in the discussion offers further proof that President Trump's claim that he wants "to keep the lands great" is, like nearly everything else he says, patently untrue.