The Kermit firing is the soap opera summer needed, and the nightmare we all fear 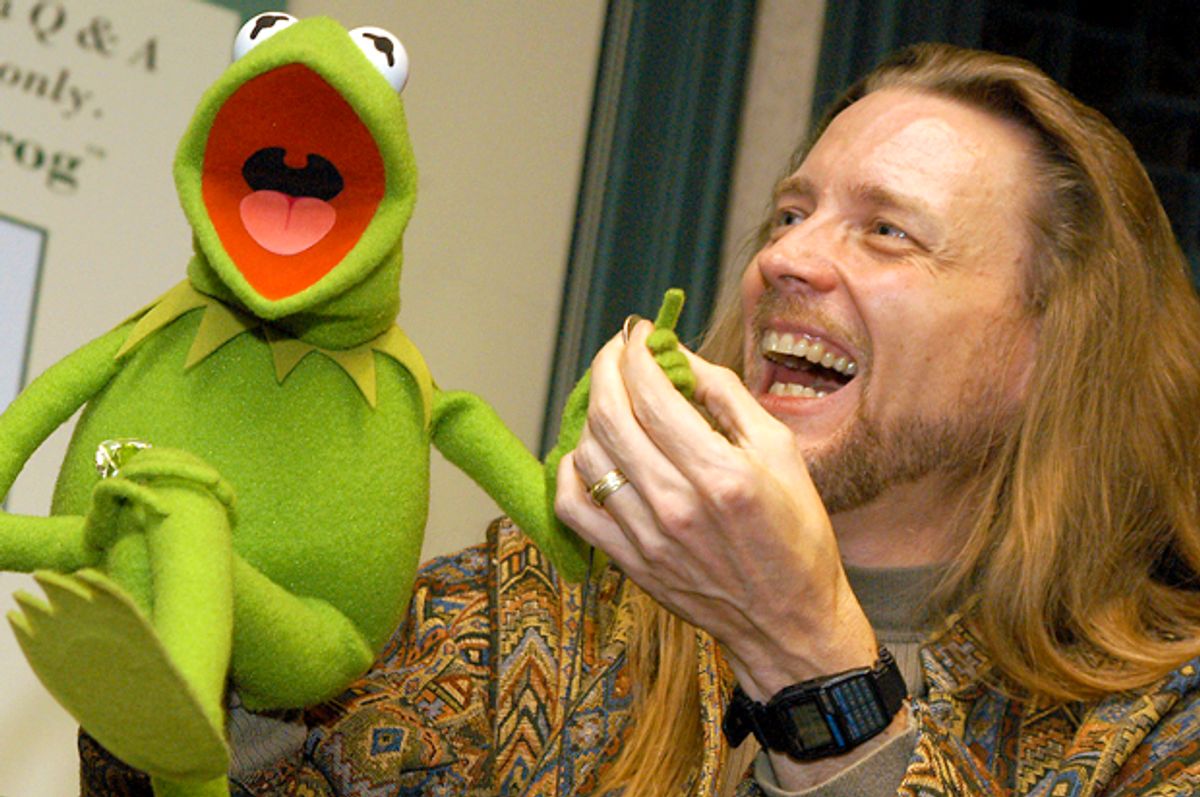 In a season where the Executive Branch's long, shuttering descent into byzantine, clandestine tales of ethics violations, foreign collusion and — oh my — treason, the summer has not offered up much in the way of headline-biting scandal outside of the existentially frightening and draining.

For those who go to the broadsheets for their juice, the guilty pleasures to be found are hardly pleasurable at all — the story of the firing of longtime Kermit the Frog voice actor Steve Whitmire being the only exception.

Exceptionally sad — but, honestly, funny and engrossing — the circumstances around the dismissal of Whitmire after almost 30 years with his hand stuck up the felt amphibian's backside continue to become more complex and, yep, petty as the days go on.

After Whitmire popped up in the news cycle claiming he had simply no idea — none — why he might have gotten fired from the Jim Henson Company (now owned by Disney), rumors and questions started to bubble. Whitmire dropped one depressing hint after another until, last night, the New York Times released a fully researched piece impressive in both its coverage and its raw juiciness.

In the article by Sopan Den and Sophie Haigney, Whitmire comes across first as sympathetic and befuddled. "The only thing I’ve done my whole adult life, and it’s just been taken away from me," he says. "I just couldn’t understand why we couldn’t resolve this."

Further down, it appears that what Whitmire could not understand was that his managers were intolerant of his allegedly haughty, uprofessional behavior. On top of objecting to notes, "The Muppets," Whitmire apparently drove hard bargains on and off set, refused to do some promotional events and dismissed younger puppeteers in what may have been a bid to keep himself indispensable.

"We raised concerns about Steve’s repeated unacceptable business conduct over a period of many years, and he consistently failed to address the feedback," a Disney executive told the Times. "The decision to part ways was a difficult one which was made in consultation with the Henson family and has their full support."

Brian Henson, chairmen of the company and another of Henson's children added that Whitmire would, "send emails and letters attacking everyone, attacking the writing and attacking the director."

Since last night's Times article, Cheryl Henson — another board member and another child of Jim — added via Facebook that Whitmire's "version of history is ridiculously self serving." She added, "My father never asked him to perform Kermit, by brother Brian did. Steve's performance of Kermit has strayed far away from my father's good hearted, compassionate leader of the Muppets. Steve performed Kermit as a bitter, angry, depressed victim. Worst of all, in the past few years he had not been funny or fun. Recasting Kermit is long over due."

Contrary to Cheryl Henson's objections above, no one sourced by the Times expressed any reservations with Whitmire's performances as the most famous muppet (Brian Henson said his Kermit was "sometimes excellent, and always pretty good"). It appears rather that it was his interpersonal style, his way of relating to management, that spelled his end for executives.

The Times' sources paint a picture of superstar hubris and unmanageable behavior, certainly. But Whitmire's arguments — that he simply didn't understand the process, that he's very willing to come back — seem just as grounded and rational. Disney could just as well be the corporate scoundrel in this tale as Whitmire could be the impossible diva. It's he-said-she-said with a mix of celebrity gossip, nostalgia and the kind of interoffice politics we all chat about all day long at work.

In the summer of Don Jr. and Jeff Sessions, it's a welcome mystery with two sparring sides each playing a catty, passive-aggressive game familiar to anyone who's followed the fallout of a Taylor Swift breakup. What could be more oddly entertaining for our Trump-crushed minds? Better yet, more details or even — fingers crossed — lawsuits could be on the way. More revelations! More backbiting! More fun!

Yes, it's all quite scrumptious. But there's something to all this pettiness beyond the delicious disconnect between the cheery, smiling, innocent vision of its context — Henson's beloved world of muppets — and the very adult spite and desperation apparent in its players. There's something more valuable here than the fact that the story in no way involves Donald Trump, Russians, the environment or anyone related to Kris Jenner. Even the way it taps into our American fascination with and disgust for Kanye West-style celebrity hubris is ultimately secondary.

In its own nasty way, Whitmire's story captures many of the anxieties each American feels every day as the failures of 21st-Century professional culture and post-regulation economics become ever more apparent.

Touchingly, Whitmire is a man — an American — who has spent his whole life practicing and perfecting one trade with complete dedication, only to find himself terminated and now professionally adrift without fully understanding why or how. He, like many in his position, doesn't see a future for himself in our economy. He was — in his mind at least — a good capitalist worker bee, giving his life and love to the corporation for the promise of a brighter future only to find himself at the end of history.

In 2017, the word "layoff" has become as universally frightening as "cancer". Thanks to dozens of factors, loosing a job is no longer looked on as momentary hassle for members of the middle and even lower upper class. It's an existential threat. All but a small, privileged percentage of us now believe we live every day on a professional precipice, that every position we have could indeed be our last. Statistics on how long it takes to get a job these days for even qualified applicants gives that a sheen of truth.

Moving from an era where loyalty to your employer was valued and collecting debt was openly encouraged to one of lean, mean efficiencies even for successful businesses and bosses of all levels looking to the sociopathic Randian objectivists of Silicon Valley for spiritual guidance, it's not unreasonable to feel yourself a dispensable, even targeted, part of incomprehensible, inhumane machine. Anyone who's been told by an HR director that being terminated is actually an opportunity for growth knows that in their bones (it's become clear that firings and workplace treatment also can cause PTSD).

We were raised to work — so many feel — raised to contribute to capitalism and consumer culture. Why then, at a time when more Americans labor harder and longer than ever before, does it reject us so cooly? Did we not smile in the right meeting or buy enough of the right furniture?

The crisis Steve Whitmire claims he is now facing is a trauma many of us have felt and a nightmare millions more of us fear on a moment-to-moment basis. More than Trump, more than Russia, more than anything else in the news cycle, this story and its petty squabbling, desperation, finger pointing and corporate language captures what is truly forefront in the American mind.

The wrapping paper of this Whitmire's tale — a plush green frog, childhood memories, Disney, celebrities misbehaving — makes it instantly attractive to our reptilian brains, a perfect mental beach read. The fact that it punctures the fairy tale not only of the happy world of Henson, but of the American dream, should haunt us way past August.