Trumpcare is dead, at least for now: But the health care fight will never end 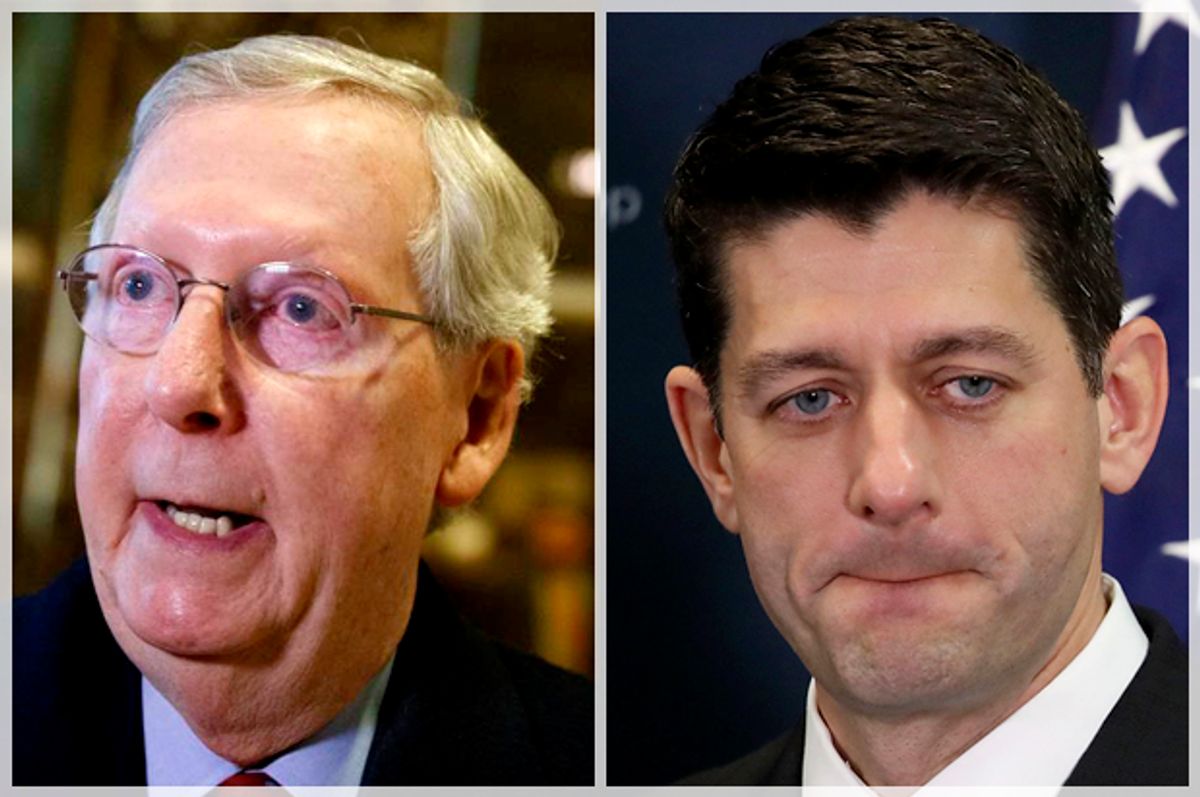 It appears that the Republican effort to repeal and replace the Affordable Care Act is dead, at least for now. Donald Trump's unrealistic, grandiose promise will go unfulfilled.

That didn't work out. After weeks of prevarication and misdirection on the part of people like Vice President Mike Pence and Health and Human Services Secretary Tom Price, who went on TV last weekend and blatantly lied about the effects of the Senate health care bill, on Monday night two GOP senators, Mike Lee of Utah and Jerry Moran of Kansas, pulled the plug by saying they could not vote for it. Added to the previously announced no votes of Sens. Susan Collins and Rand Paul, Majority Leader Mitch McConnell is now at least two short. He has admitted that this bill will not pass.

We've been here before, of course. The first House bill was pulled and they came back and passed an even worse version. This may not end the way everyone seems to assume it will either.

Both Trump and McConnell acknowledged that the Senate's BCRA is dead and signaled their support for a "full repeal plus two-year delay until they figure out what the hell is going on" plan. It is not impossible that they could put something else together.

After all, the reasons three of the four senators gave for their unwillingness to pass the bill is that it just wasn't harsh enough. Repeal and replace with nothing would undoubtedly make them quite happy. That would leave the handful of Republican moderates in the Senate having to do something only Collins has so far been willing to do: take a stand for decency. Sens. Dean Heller of Nevada, Shelley Moore Capito of West Virginia, Rob Portman of Ohio, John Hoeven of North Dakota and Lisa Murkowski of Alaska have all said that they won't vote to deny people health insurance. But there's always a chance they can be appeased with the two-year delay and a fatuous promise to fix everything before then. Nobody should relax until it's clear that this is all well and truly dead.

This repeal-and-delay plan was originally proposed back at the beginning of the year but faced a huge uproar, mostly from the health care industry, which cannot run its businesses with this kind of uncertainty about the financing, rules and regulations under which they must operate. A handful of senators balked at the time, including Bob Corker of Tennessee and Tom Cotton of Arkansas, who said, "I don’t think we can repeal Obamacare and say we’re going to get the answer two years from now." Both Paul and Collins were against it too, as were many of the Republican governors who also have to plan their budgets.

But what really scared them off that time was public opinion. Only 20 percent of Americans were in favor of repeal-and-delay five months ago. It's hard to imagine that after they've seen what kind of horrendous plans the Republicans tried to ram through the Congress they'll be more favorably disposed today. According to a recent Gallup poll, Americans prefer Democrats to handle health care by 55 to 36 percent.

The Republican leadership exemplified by House Speaker Paul Ryan thought they had come up with a clever way to have their cake and eat it too. If they could repeal the Affordable Care Act and then take their big victory lap, that might satisfy their base that they were getting things done -- after which they could pretend they were creating some kind of "new" health care system that would kick in gradually. The simple fact was that they had no idea how to cover the people who are currently covered under the ACA and they knew it. Their best hope was to ease people back into their previous anxiety and despair and blame Obamacare for it.

Donald Trump has said many times that he believes the best political move would be to keep Obamacare in place and help it fail, so he and his party could blame the Democrats. If Republicans can drag this out a couple of years and guilt Democratic lawmakers into signing on to some inadequate Band-aids in order to spare a few lives, that would really be sweet.

It will also be sweet for the Democrats when they run ads against every House Republican who voted for that AHCA atrocity under the assurance that they would "fix it in the Senate." If the Democrats do manage to eke out a new House majority it will be the health care albatross that brings down the GOP. They can name him Donald.

But whether Republicans manage to push through repeal-and-delay or just drop it altogether, liberals and progressives need to reckon with the fact that this is not the end. There will never be an end.

Republicans have been trying to destroy the American safety net for decades. They've been hostile to Medicare and Medicaid since the day they were passed. They've been running against Social Security for 82 years. (They just tried to privatize it in 2005!) They will never stop attacking the ACA either.

This isn't just about profits or " free markets." Consider that this Senate bill was opposed by all the so-called stakeholders: the insurance companies, the hospitals, doctors and even big business. It still has 48 out of 52 votes in the Senate. Conservatives simply do not believe that people have a right to health care. They see it as a commodity like any other, something which you should not have if you cannot pay for it.

By way of crude illustration, recall when libertarian godhead Rep. Ron Paul ran for president in 2008. CNN's Wolf Blitzer asked him during a debate what an uninsured man who  became catastrophically ill and needed intensive care for six months should do. Paul replied, “What he should do is whatever he wants to do and assume responsibility for himself. That’s what freedom is all about, taking your own risk. This whole idea that you have to take care of everybody …” The audience then erupted into cheers, cutting off Paul's sentence. Blitzer followed up by asking “Congressman, are you saying that society should just let him die?” Members of the audience clapped and shouted "Yeah!"

Or there was this remarkable moment from an Obamacare town hall in 2009:

The sainted Ronald Reagan made his name speaking out against "socialized medicine" for years, memorably warning that if the government passed Medicare, we were all "going to spend our sunset years telling our children and our children's children what it once was like in America when men were free."

Nobody who believes that human beings have a right to a government guarantee of health care, security in their old age and society's support should they be unable to work should ever rest on their laurels. Those who don't agree will never stop trying to take those things away.