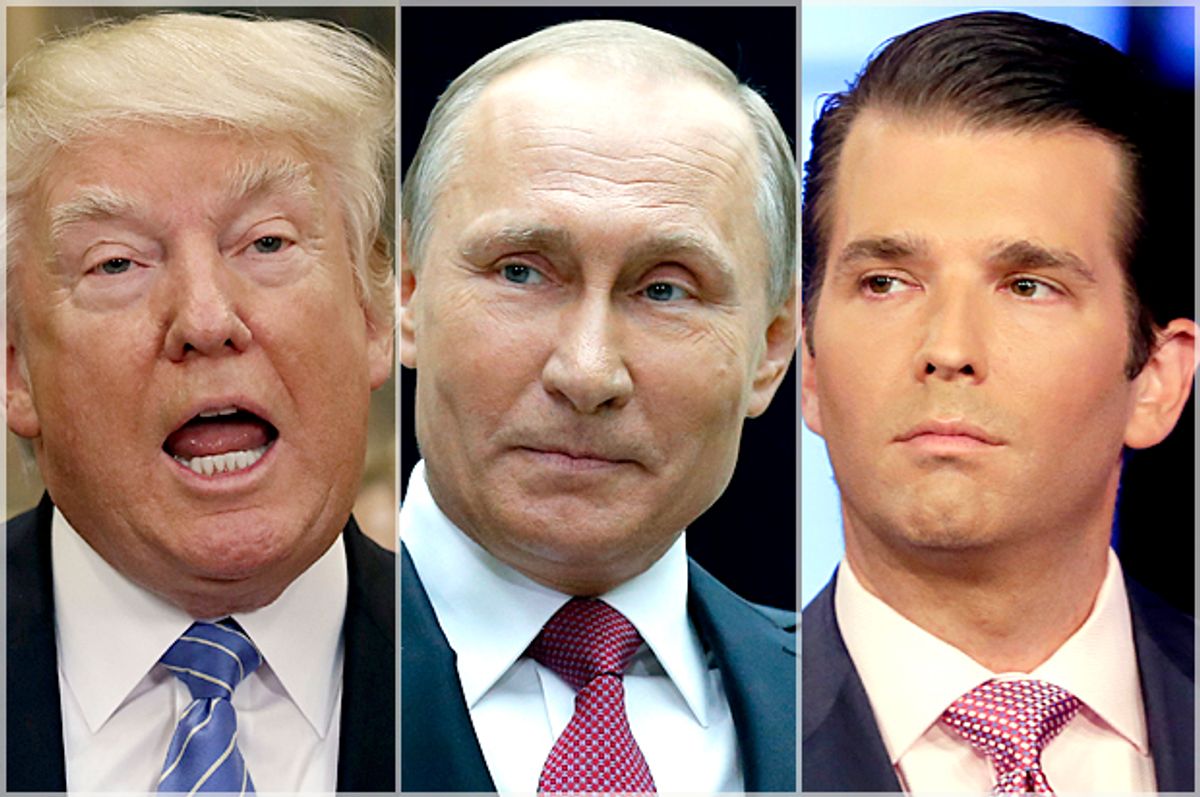 What do you do when you have a president who was not legitimately elected? That is the question we face in the wake of revelations that Donald Trump Jr. and Trump’s son-in-law Jared Kushner, along with his campaign manager Paul Manafort, met with a gaggle of Russians last year in furtherance of a plot for the Russian government to help get Donald Trump elected president. You can spin that meeting at Trump Tower last June 9 any way you want, and Trump and his people are in danger of being attacked by anti-immigrant loons as whirling dervishes they’ve been spinning so fast, but the fact remains that the meeting took place and it had the stated purpose of receiving help from the Russian government in the presidential campaign of Donald Trump. Whether the meeting amounted to “collusion” is a silly question. Russian meddling all by itself, with or without the help of Trump and his minions, would make the election illegitimate, so whether the meeting was “legal” or not is immaterial at this point. In coming days and weeks, we are likely to hear that other meetings like it took place later in the campaign. We have reached a major turning point in the whole Trump/Russia story. They sought out and accepted help from elements of the Russian government in getting elected. It happened. The question remaining is, what do we do about it?

We are learning that the framers made some critically outmoded assumptions when drawing up the Constitution of the United States. Perhaps most prominently, they assumed that a president would be someone like them: white, male, educated, landed, monied, accomplished, and experienced. They figured they didn’t have to worry about a president being ignorant of science, ignorant of usage of the language, disrespectful of social norms, and inexperienced at government if he was like them. Yet here we are. They also assumed that election of the president would be handled within certain limits of political behavior by the same group of landed gentry they came from, informed by similar educations and backgrounds, subject to similar social constraints of class and privilege. Yet here we are with election by popular vote influenced by a form of mass hysteria impossible to have foreseen.

So feeling comfortable with what you might call a familiar ruling body politic, the framers didn’t build into the Constitution many safeguards, impeachment being quite literally the only one applicable to the presidency. Impeachment is the solution that is being offered by people in the “Resistance,” and even by a couple of members of congress. Putting aside for the moment the unlikelihood of a very conservative Republican congress undertaking such a move, there are problems with impeachment that aren’t being raised.

The first of these is the idea that most of the crimes under investigation occurred before Trump took office, the meeting on June 9, 2016 being only the latest example. The framers of the Constitution did not consider the situation we find ourselves in at the time they wrote our founding document. In allowing for removing a president from office for “high crimes and misdemeanors,” the framers assumed at least that the president would have been legitimately elected and that the impeachable offenses would be committed after taking office. What about crimes committed before a president took office? What about “high crimes and misdemeanors” committed in furtherance of attaining the office of the presidency itself?

Pamela Karlan is a graduate of Yale Law School, currently professor of law at Stanford Law School and former Deputy Attorney General for Voting Rights in the Obama Justice Department, and frequent litigator before the Supreme Court. I reached her this week at her office in California with the question of this apparent hole in the Constitution. She pondered it with obvious relish. “There certainly isn’t anything written down,” she said. “The framers didn’t assume the kind of elections we have today, the election of the president by popular vote. They assumed it would be filtered through the electoral college. They certainly didn’t assume the kind of money involved today, or the fact that we would end up with only two political parties.”

The problem with Russian involvement in the campaign is that none of it may end up being illegal. Influencing voters with “bad information,” as Professor Karlan put it, is not illegal, maybe not even if it’s done by foreigners.

But what if voter registration lists were manipulated? I asked her. “If it turns out that people were prevented from voting, that would be stealing an election,” she said definitively. “All of this assumes some sort of cooperation by Trump or his campaign with the Russians. But I don’t think that’s even necessary. Suppose the Russians decided to get involved without colluding with Trump? Suppose they just wanted a weak United States? Suppose they wanted to permanently damage the standing of the United States in the world by electing someone like Trump? The election would be illegitimate because it was stolen by the Russians acting alone.”

Now we were getting down to it, to what we might call the negative space in the Constitution. What sort of remedy would there be for such an illegitimate election? “Part of the problem is structural features of the Constitution,” Karlan said. “It doesn’t provide for a recall of a president, the way some state constitutions do. The United States Constitution provides for fixed terms of office, but we don’t have a parliamentary system, which would allow for votes of no confidence, so we really are facing an entirely new circumstance.”

So the impeachment clause in the Constitution really provides a very truncated remedy for an illegitimate presidency.  It’s like a gentleman’s agreement to terminate a contract more than an aggressive way to remove a political cancer.

“Well, it’s no surprise that the Constitution doesn’t provide us with a way to deal with Trump, because they never assumed someone like him would become President, someone who had never held elected office before, or served in government even as a private in the Army. If we had a series of presidents like Trump, we wouldn’t have a United States of America. We’re lucky he didn’t get elected in 1890 rather than 2016. He’s drawing down the capital gained from 240 years of history and 44 presidents before him. The situation really is unprecedented.”

Geoffrey R. Stone agrees with Professor Karlan. Stone is the Edward H. Levi Distinguished Service Professor of Law at the University of Chicago Law School and is on the Board of Advisors of the ACLU and is a frequent commenter on constitutional issues. He was out of cell phone range at a camp in the “north woods,” as he described it, but was somehow able to respond to my query by email. I asked him whether the Constitution provides us with a way to deal with a president who was not legitimately elected, and about what might be called, for want of a better term, the whole “Pence situation.” If Trump wasn’t legitimately elected, what do we do about Pence? He ran with Trump. He was elected with Trump. On the night they won, he took the stage with Trump and they both raised their arms in victory.

Trump is obsessed with his electoral victory (as narrow as it was) and with somehow “proving” that he won the popular vote with insane allegations of illegal votes cast by illegal immigrants, for a very good reason. He knows his election was illegitimate. He knows that any successful challenge will cast out not just his presidency, but the legitimacy of his “win.” He is a man for whom “winning” is the beginning, middle, and end of it all, more important than the office itself. It’s why he’s already running for re-election, complete with a campaign committee, campaign fund-raising, and campaign rallies. He doesn’t really want to be president. He just wants to win again, and if his “win” in 2016 is proved illegitimate, it’s the end not just of President Trump, but of Trump himself.

It is regularly said that the election of Donald Trump has created a “post-truth” era. Trump exploits it freely with his barrage of “fake news” charges, blasted out in tweets, echoed by the bullhorns of Fox News, Breitbart, Drudge, and loons even further to the right. But all of this amounts to nothing more than smoke intended to obscure facts about Trump’s involvement with Russians in illicit business deals and potentially illegal influence over his election. But Trump’s election has taken us further, into what amounts to a post-constitutional era, in which we find ourselves unmoored from conventions and principles that have served us for nearly two and a half centuries, a legal black hole that threatens to swallow us whole. How we navigate ourselves out of the mess left to us by the election of Donald Trump will define who we are as a people and a nation.