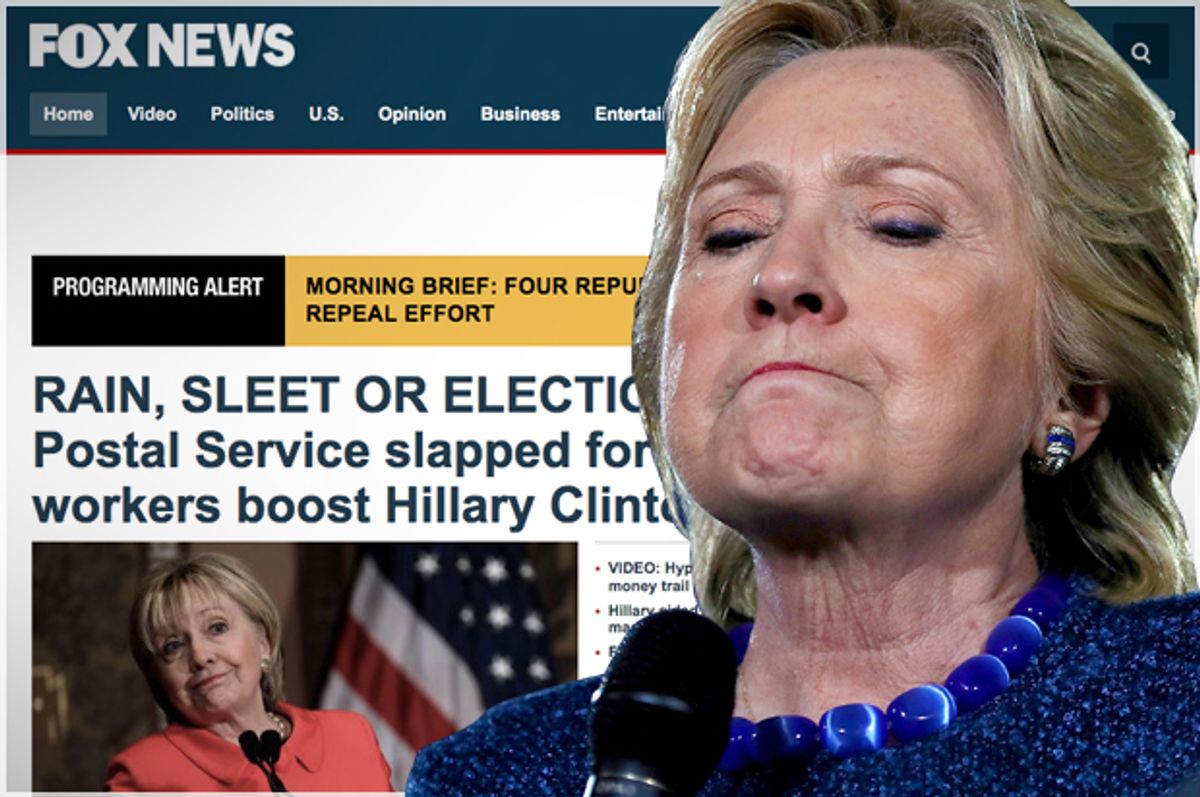 It's been more than eight months since the presidential election, but Hillary Clinton is currently featured on the homepage of Fox News.

The news outlet, in the middle of news about Russia and a failed health care bill, lead with an image of the former politician, who has mostly stayed out of the spotlight since losing the presidential election in November. And the story wasn't even directly about Clinton, either.

In a story titled, "USPS broke law in allowing working to boost Clinton campaign, watchdog says," Fox News sought to somehow tie Clinton to a July 14 investigation by the Office of Special Counsel, which found that the U.S. Postal Service violated the Hatch Act by "facilitating and directing carrier releases for the [postal workers] union’s political activity."

The headline of the story was also misleading, implying that the USPS was actively trying to aid the Clinton campaign, which the report stated was not the case.

"OSC's investigation did not determine" that "USPS officials helped NALC identify or select carriers to participate in the Labor 2016 program. The evidence also does not support a finding" that " USPS officials sought to assist NALC's favored candidates in achieving electoral success," the report said.

"Rather, the evidence suggests that USPS's practiced to engender goodwill in its working relationship with the union. The record also reflects that the NALC-USPS practice is long-standing, going back many election cycles, and perhaps started in the 1990s. USPS management is not aware of complaints or concerns about the propriety of the practice prior to 2016."

The only portion of the report from that paragraph cited in the Fox News article was that the practice was long-standing.

But Fox News has been focused on Clinton in other ways as well. On Tuesday night Fox News host Sean Hannity was talking to a panel of guests about crimes Clinton has allegedly committed. Fox News anchor Gregg Jarrett ranted about a long list of alleged criminal actions.

"It is a crime, a felony, to use your public office to confer a benefit on a foreign government in exchange for money. It’s called fraud and bribery. It’s an Emoluments Clause violation, public corruption, it’s also arguably racketeering to use a business as a receptacle for illegal money. All of those are crimes," Jarrett said.

On Wednesday, Fox News stopped talking about Clinton directly. Their top story turned to the news that "Rep. Debbie Wasserman Schultz plans to allow federal investigators to scan a laptop belonging to her as part of a complex probe into allegations of computer theft, over-billing and possible email hacking." The investigation into Wasserman Schultz's computer being hacked was not related to the hacking of the Democratic National Committee emails last year.