Are cows sacred to all Hindus? 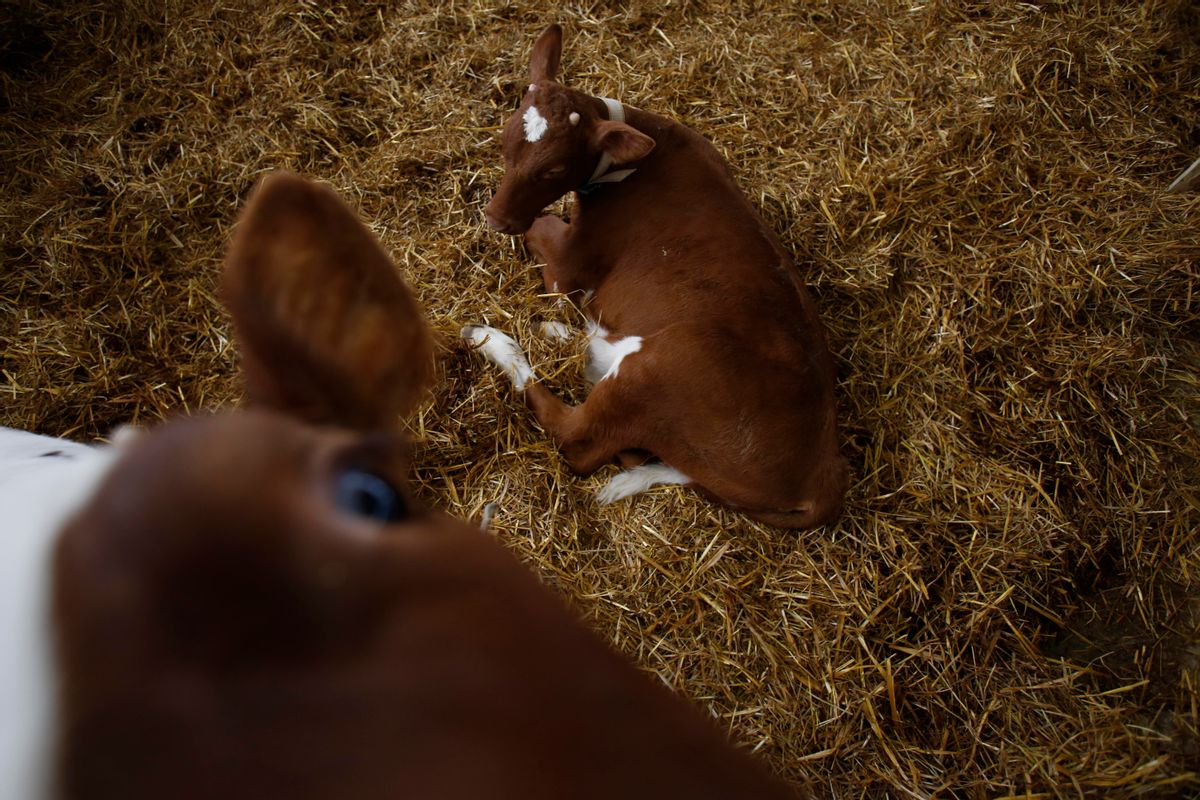 In this photo taken on Tuesday, April 15, 2014, Norwegian Red calves rest on a pile of hay inside a farm in the village of Kozarac, near Bosnian town of Perijedor, 250 kms northwest of Sarajevo. Bosnian farmer Jusuf Arifagic invested eight million euro into the luxury farm that started four months ago with the import of 115 Norwegian Red Cows - a type of tough and hornless animal bred in Norway over the past 75 years to produce more and better milk than the usual cow known in the Balkans. He plans to expand into the biggest facility keeping this type of animal in Europe with 5,000 cows. In a country where half of the population is living in poverty, his animals sleep on mattresses in a barn with a computerized air condition and lighting system. They are bathed regularly, get a massage whenever they feel like it and receive the occasional pedicure.(AP Photo/Amel Emric) (AP Photo/Amel Emric)
--

Just this past June, at a national meeting of various Hindu organizations in India, a popular preacher, Sadhvi Saraswati, suggested that those who consumed beef should be publicly hanged. Later, at the same conclave, an animal rights activist, Chetan Sharma, said,

These provocative remarks come at a time when vigilante Hindu groups in India are lynching people for eating beef. Such killings have increased since Narendra Modi and his right-wing Bharatiya Janata party came to power in September 2014. In September 2015, a 50-year-old Muslim man, Mohammad Akhlaq, was lynched by a mob in a village near New Delhi on suspicion that he had consumed beef. Since then, many attacks by cow vigilante groups have followed. Modi’s government has also prohibited the slaughter of buffalo, thus destroying the Muslim-dominated buffalo meat industry and causing widespread economic hardship.

Most people seem to assume that no Hindu has ever consumed beef. But is this true?

As a scholar, studying Sanskrit and ancient Indian religion for over 50 years, I know of many texts that offer a clear answer to this question.

Scholars have known for centuries that the ancient Indians ate beef. After the fourth century B.C., when the practice of vegetarianism spread throughout India among Buddhists, Jains and Hindus, many Hindus continued to eat beef.

In the time of the oldest Hindu sacred text, the Rig Veda (c. 1500 B.C.), cow meat was consumed. Like most cattle-breeding cultures, the Vedic Indians generally ate the castrated steers, but they would eat the female of the species during rituals or when welcoming a guest or a person of high status.

Ancient ritual texts known as Brahmanas (c. 900 B.C.) and other texts that taught religious duty (dharma), from the third century B.C., say that a bull or cow should be killed to be eaten when a guest arrives.

According to these texts, “the cow is food.” Even when one passage in the “Shatapatha Brahmana” (3.1.2.21) forbids the eating of either cow or bull, a revered ancient Hindu sage named Yajnavalkya immediately contradicts it, saying that, nevertheless, he eats the meat of both cow and bull, “as long as it’s tender.”

“Once, when there was a great famine, King Prithu took up his bow and arrow and pursued the Earth to force her to yield nourishment for his people. The Earth assumed the form of a cow and begged him to spare her life; she then allowed him to milk her for all that the people needed.”

This myth imagines a transition from hunting wild cattle to preserving their lives, domesticating them, and breeding them for milk, a transition to agriculture and pastoral life. It visualizes the cow as the paradigmatic animal that yields food without being killed.

Some dharma texts composed in this same period insist that cows should not be eaten. Some Hindus who did eat meat made a special exception and did not eat the meat of cow. Such people may have regarded beef-eating in the light of what the historian Romila Thapar describes as a “matter of status” – the higher the caste, the greater the food restrictions. Various religious sanctions were used to impose prohibition on beef eating, but, as Thapar demonstrates, “only among the upper castes.”

As I see it, the arguments against eating cows are a combination of a symbolic argument about female purity and docility (symbolized by the cow who generously gives her milk to her calf), a religious argument about Brahmin sanctity (as Brahmins came increasingly to be identified with cows and to be paid by donations of cows) and a way for castes to rise in social ranking.

Sociologist M. N. Srinivas pointed out that the lower castes gave up beef when they wanted to move up the social ladder through the process known as “Sanskritization.”

By the 19th century, the cow-protection movement had arisen. One of the implicit objects of this movement was the oppression of Muslims.

Famously, Gandhi attempted to make vegetarianism, particularly the taboo against eating beef, a central tenet of Hinduism. Gandhi’s attitude to cows was tied to his idea of nonviolence.

He used the image of the Earth cow (the one that King Prithu milked) as a kind of Mother Earth, to symbolize his imagined Indian nation. His insistence on cow protection was a major factor in his failure to attract large-scale Muslim support.

Yet even Gandhi never called for the banning of cow slaughter in India. He said,

“How can I force anyone not to slaughter cows unless he is himself so disposed? It is not as if there were only Hindus in the Indian Union. There are Muslims, Parsis, Christians and other religious groups here.”

From my perspective, in our day, the nationalist and fundamentalist “Hindutva” (“Hindu-ness”) movement is attempting to use this notion of the sanctity of the cow to disenfranchise Muslims. And it is not only the beef-eating Muslims (and Christians) who are the target of Hindutva’s hate brigade. Lower-caste Hindus are also being attacked. Attacks of this type are not new. This has been going on since Hindutva began in 1923. And indeed, in 2002, in a north Indian town, five lower-caste Hindus were lynched for skinning a cow.

But, as local analysis shows, the violence has greatly increased under the Modi government. IndiaSpend, a data journalism initiative, found that “Muslims were the target of 51 percent of violence centered on bovine issues over nearly eight years (2010 to 2017) and comprised 86 percent of 28 Indians killed in 63 incidents…As many of 97 percent of these attacks were reported after Prime Minister Narendra Modi’s government came to power in May 2014.”

In 2015, in the western Indian state of Gujarat, lower-caste Hindus were flogged for skinning a dead cow, triggering spontaneous street protests and contributing to the resignation of the state’s chief minister.

As these and so many other recent attacks demonstrate, cows – innocent, docile animals – have become in India a lightning rod for human cruelty, in the name of religion.

Wendy Doniger, Distinguished Service Professor of the History of Religions, University of Chicago