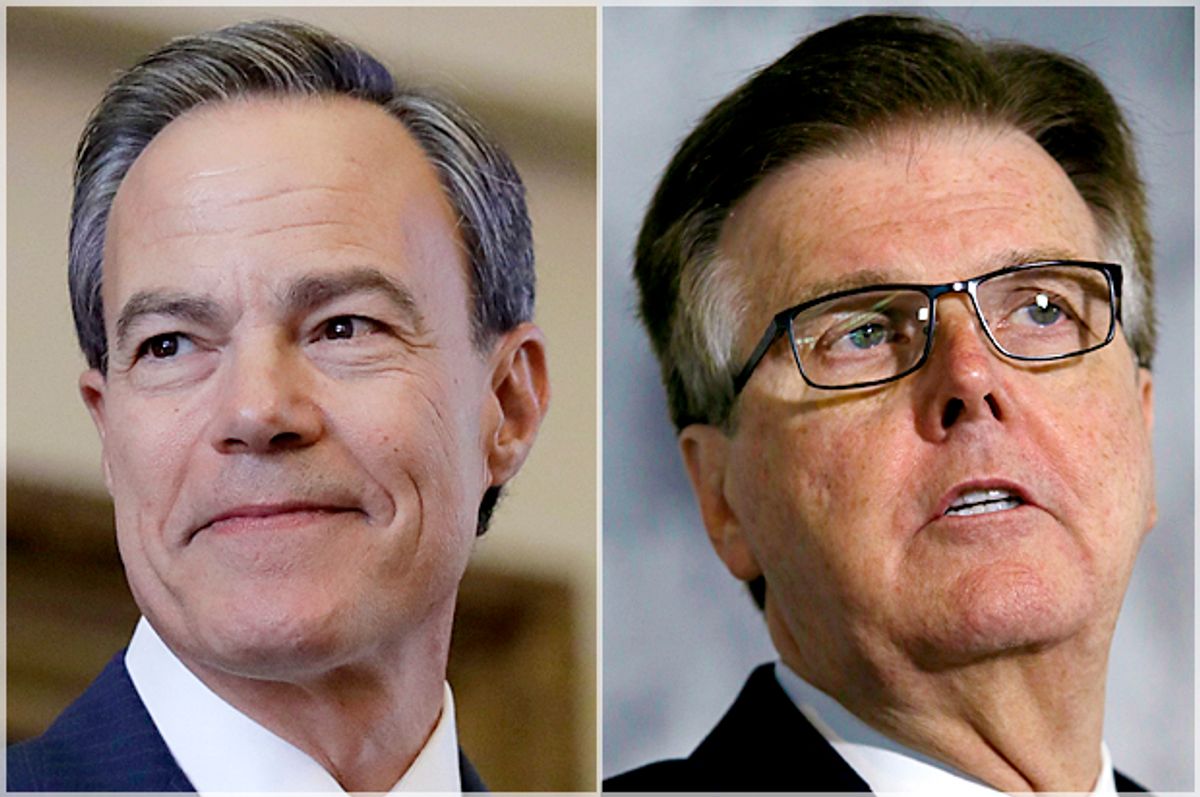 Lt. Gov. Dan Patrick of Texas is a man with an obsession. The talk-show host-turned-Republican politician is desperate to pass some kind of bill making it harder for transgender Texans, especially schoolchildren, to use the bathroom safely. In his quest to pass a bill discriminating against trans people, Patrick held a number of critical funding bills hostage during the regular legislative session. This caused Gov. Greg Abbott to call a special session, which started Tuesday, and it's clear Patrick hopes this buys him more time to twist more arms and pass some version of his anti-trans bill.

Republicans control the Texas legislature, but even so Patrick is facing an uphill battle in his quest to legally harass people who want to go to the bathroom that matches their gender identity. Despite his efforts to portray his anti-trans agenda as a moderate, commonsensical position, Patrick is facing a wall of opposition from the business community, faith leaders and even his fellow Republicans — including Texas House Speaker Joe Straus.

Hard as it may be to believe in the age of Donald Trump, there may actually be a line that right-wing Republicans can't cross, at least not without getting powerful blowback from some traditional allies.

Three bills discriminating against trans people have been introduced during the special session, all aimed in one way or another to stop local governments or schools from having laws or policies allowing trans people to use the bathroom that corresponds with their gender identity.

Patrick has been running around denying that these efforts are about discrimination. He instead uses euphemisms like "privacy legislation" and claims his goal is to "maintain separate restrooms, locker rooms, and shower facilities for men and women and boys and girls." His problem is that no one is attacking gender-separated facilities in the state — the only question is whether trans people will be forced to use the wrong bathroom in public places.

It's not just progressive activists who see through Patrick's disingenuous dithering.

“I’m disgusted by all this," Straus told a Republican colleague who was trying to get him to pass the bill, according to Straus' later account to Lawrence Wright of the New Yorker.

"Tell the lieutenant governor I don’t want the suicide of a single Texan on my hands,” he added, referring to research showing that discrimination is a factor in the high suicide rate among trans people.

During the regular session, Straus dismissed Patrick as "an entertainer, a talk show guy." During the legislative break, he continued to throw shade at Patrick in interviews, telling the San Antonio Express-News, "I know how to govern without being an extremist."

"Joe Straus’ actions and what he says shows that he understands that these discriminatory bills are bad for business, they’re bad for Texas, they’re bad for Texans," said Lisa Scheps, interim executive director of the Transgender Education Network of Texas. "To me, he is a little bit more objectively looking at the situation rather than emotionally wanting to punish one group of Texans.”

Straus positions himself as an old-school business Republican, and one thing is certain: The business community does not support anti-trans discrimination bills. Many prominent corporations that do an enormous amount of business in Texas — including IBM, American Airlines, AT&T and Southwest Airlines — have spoken out against the bill.

"That’s because that helps their bottom line," Scheps said, noting that business leaders worry about attracting good employees to a state with a reputation for discrimination.

In an effort to spin this bill as positively as he can, Patrick has leaned heavily on Christian right leaders, trying to make it seem as if anti-trans discrimination is backed by Christian faith and morality. In response, the Texas Freedom Network and Equality Texas have organized a network of faith leaders to stand against this bill with the Texas Believes project. More than 200 religious leaders in the state have signed a letter opposing anti-trans bills.

Rev. Walters testified against the regular session efforts to pass an anti-trans bill back in March, staying up until after 3 a.m. to get her turn in a long line of people wanting to testify. As such, she got a first-hand view of the tactics Patrick was using to make this bill seem more palatable than it is.

“Dan Patrick was handing out clergy badges for all the clergy that he invited there," she said. "There were tons of us that were against the bill. None of [the clergy members who opposed the bill] got clergy badges."

After a point, she added, "we didn’t want them even, anymore, because we knew that they were a sign you were with Patrick."

The longer this fight drags on, the sillier the supporters of these retrograde bills look. A trans woman named Ashley Smith scored a particularly funny point against Abbott, who has supported Patrick's obsession with anti-trans legislation, over the weekend by getting her photo taken with the governor.

Despite nationwide support, activists and other pro-LGBT community members understandably worry that Patrick is going to somehow get an anti-trans bill passed. He has demonstrated a willingness to hold necessary state funding hostage in an effort to browbeat Straus into giving in. Abbott has also embraced bullying tactics, threatening to "establish lists that we publish on a daily basis to call people out" for opposing his agenda items, including the anti-trans legislation.

But so far, Straus seems unperturbed. In June, he compared the Abbott-Patrick agenda to "a room full of horse manure." And he told the New Yorker that the governor can "call as many thirty-day sessions as he would like" but that the "legislature is not obligated to act upon his agenda items within the thirty-day period."

So for now it's a standoff -- and the rights of trans people in Texas, especially those who attend public schools and universities, depend largely on who blinks first.