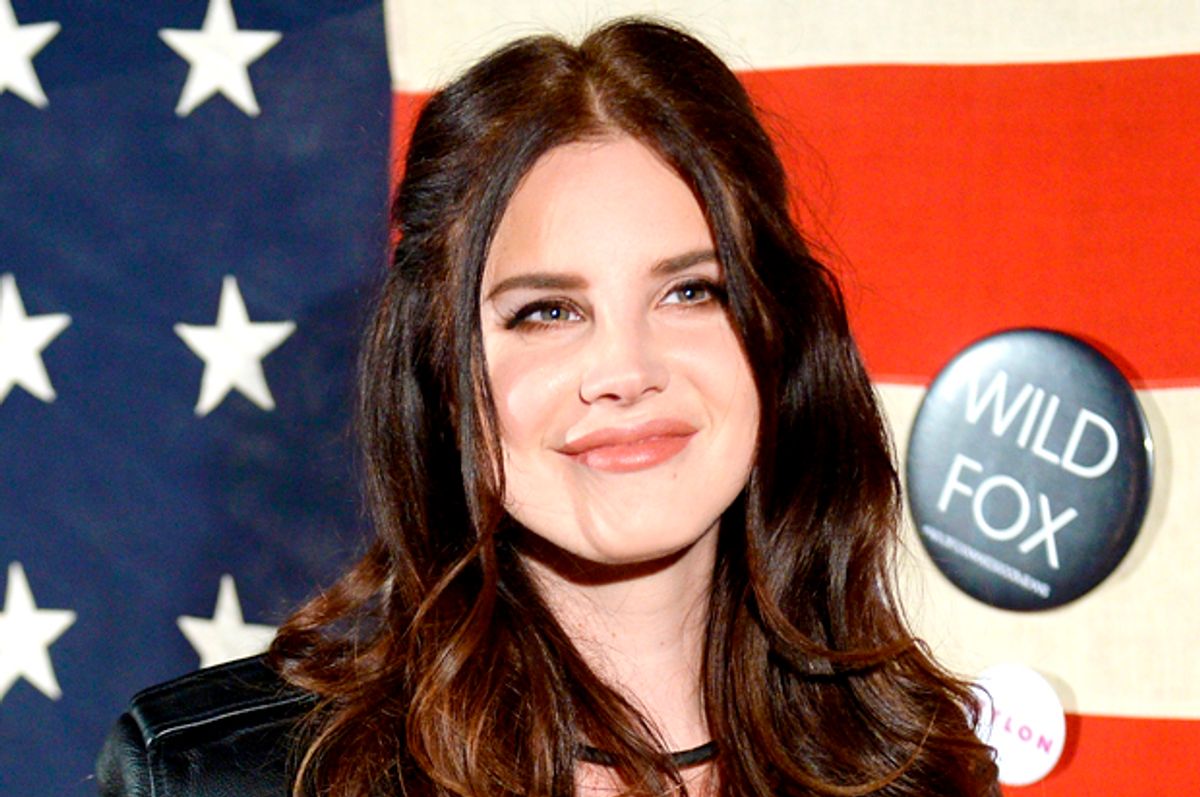 Cracked porcelain doll and living Urban Outfitters mannequin Lana Del Rey has announced that she will no longer incorporate visual themes connected to the American flag due to her disapproval of the policies and behavior of current U.S. president Donald J. Trump.

Del Rey, a talented, interesting singer and songwriter whatever one may think of her drowsy, 4 a.m. personality, mall-shop nihilism and sometimes problematic attitudes toward feminism and death, was asked by Pitchfork writer Alex Frank, "Is it harder to be romantic about America when Trump is the nation’s biggest celebrity?"

Frank was referring to not only Del Rey's lyrics, but her visual style which has often leaned on troupes of American nostalgia rooted in the 1950s and '60s. Her use of of the American flag in particular has been a staple of the imagery surround her from her clothes, to her backgrounds in her photos and videos to her concert performances.

Del Rey responded, "It’s certainly uncomfortable. I definitely changed my visuals on my tour videos. I’m not going to have the American flag waving while I’m singing "Born to Die.'" She added, "It’s not going to happen. I’d rather have static. It’s a transitional period, and I’m super aware of that. I think it would be inappropriate to be in France with an American flag. It would feel weird to me now — it didn’t feel weird in 2013."

Throughout the very readable interview, Del Rey returned to the issues Trump presents repeatedly, even suggesting that his election has spurred a reassessment of her previously unbalanced, sometimes dismissive approach to feminism.

"I feel less safe than I did when Obama was president," she said. "When you have a leader at the top of the pyramid who is casually being loud and funny about things like that, it’s brought up character defects in people who already have the propensity to be violent towards women. I saw it right away in L.A. Walking down the street, people would just say things to you that I had never heard."

While it's perhaps a one-dimensional reading of the problems Trump presents to walk away from overt patriotic imagery over them, it is at the very least understandable. Some may wave the flag ever harder as an act of resistance against the new administration.

Yet, with so many #MAGA hat-wearing Trumpsters out there coating themselves in the red, white and blue, perhaps one risks guilt by association whenever wrapping oneself in the stars and stripes. It is just one of the many thorny, frustrating complications this president presents.