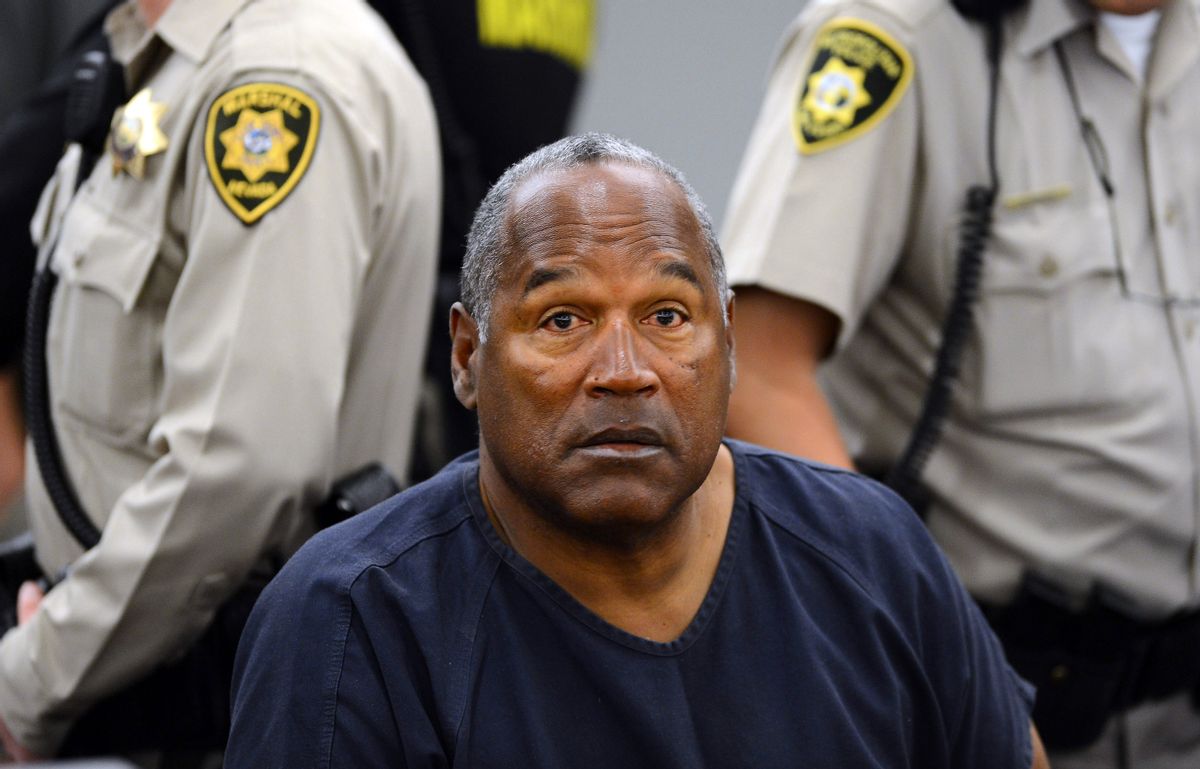 FILE - In this May 14, 2013 file photo, O.J. Simpson sits during a break on the second day of an evidentiary hearing in Clark County District Court in Las Vegas. Simpson is serving nine to 33 years in prison for his 2008 conviction in the armed robbery of two sports memorabilia dealers in a Las Vegas hotel room. (AP Photo/Ethan Miller, Pool, File) (AP)
--

After spending nine years in prison stemming from his involvement in a Las Vegas robbery, Orenthal James "O.J." Simpson was granted parole on Thursday. He could be released as soon as October 1, according to ABC News.

When the 70-year-old was recalling the night of the robbery, he told the four Nevada commissioners that he "wish[es] this would have never happened."

Simpson was at times jovial and combative with the members of the parole board, expressing his remorse and saying he's humbled by his incarceration. Simpson was sentenced to prison following an arrest in 2007 during a botched robbery in Las Vegas, when he led a group of men into a hotel and casino to steal sports memorabilia at gunpoint. He contended the memorabilia and other personal items belonged to him.

Simpson said the memorabilia was his, and he wanted his property back. "I haven't made any excuses in the nine years I've been here and not trying to make an excuses now," he said. When asked if the property were indeed his, he replied, "It's been ruled legally by the state of California that it was my property and they've given it to me," according to ABC.

Simpson said he takes full responsibility for what happened, and said he plans to live a better life outside of prison. "I'm not a guy who lived a criminal life," he said, and added that he's been "a good guy" while behind bars, ABC reported. Taking an "alternative to violence" class in prison was a pivotal moment for him, and he said it was "the most important course anybody in this prison can take because it teaches you how to deal with conflict through conversation."

"I had some problems with fidelity in my life, but I've always been a guy that pretty much got along with everybody," Simpson said.

Arnelle Simpson, the former football star's oldest daughter, also spoke at the hearing. "No one really knows how much we have been through, this ordeal in the last nine years," she said, according to ABC. "We just want him to come home."

"This has been really, truly hard. ... I know that he is remorseful," she added.

Bruce Fromong, a victim of the robbery and one of the memorabilia dealers, also spoke. He admitted the items in the hotel room did belong to Simpson but said Simpson "was misguided" on the day of the robbery, ABC reported.

"O.J. is my friend, always has been, and I hope will remain my friend."