There are 12 words on the record that make the treason case against Donald Trump Jr., and Trump's voters don't care 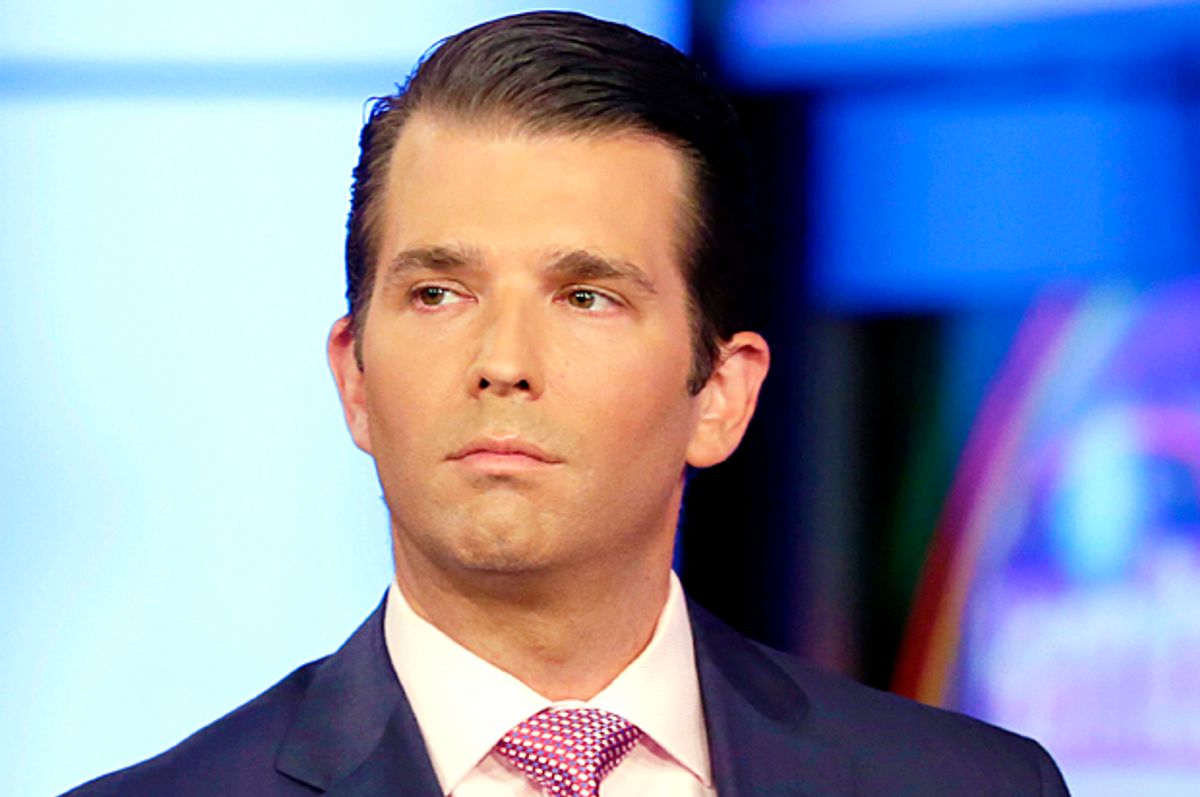 The maelstrom of chaos, apparent confusion, and political effluence that is emitted by Donald Trump's White House on a near daily basis is overwhelming. This is partly by design from Trump's handlers and also as a function of coincidence. It is a near impossible task to fully document each of those moments and to put them in proper context. Disorientation and confusion are one of the primary weapons of a fascist; Trump and his inner circle have mastered those techniques.

As the truism suggests, the news media is obsessed with what is "new." The 24/7 cable news cycle has only amplified that tendency. As such, the Trump treadmill continues unhindered. Too many important details about Trump's many scandals — as well as his vision for the country (contrary to liberal schadenfreude and mocking glee he has actually enacted many extremely harmful and dangerous changes in public policy by fiat) — have not received sufficient commentary or analysis.

Donald Trump is a master liar. By comparison his son is a bumbler who has not yet learned the dark arts of expert mendacity. This is not for lack of trying. Donald Trump Sr.  just has many decades more practice.

Last week, Donald Trump Jr. publicly released emails in an effort to preempt The New York Times and its story about his meeting with Russian operatives during the 2016 presidential campaign. There he was promised damaging information about Hillary Clinton. This meeting is the clearest example so far of collusion between Donald Trump and Russia.

In response to the initial rumors and eventual "revelation" about this meeting, the Trumps responded in a predictable pattern. First, there were denials that any such meeting took place. Then the narrative shifted to suggest that the meeting took place but the topics discussed were innocuous and trivial. The lies would develop to now emphasize that a meeting did take place between Trump Jr. and Russian representatives but that nothing came of it. Consequently, no harm (or crime) was committed. As more details emerged — including how senior members of Trump's campaign were present including Paul Manafort and Jared Kushner (both of whom are under investigation for their highly suspect connections to Russian interests) — the lies evolved again to focus on how collusion with a foreign power to win an American election is somehow not illegal.  Now it is known that this previously secret meeting was also attended by a former Russian spy as well as a Russia-connected financier who has been investigated regarding his involvement with money laundering.

Often lost in this story are the 12 words included in Trump Jr.'s emails regarding the information to be offered at his Russian meeting. They are: "but is part of Russia and its government's support for Mr. Trump."

Donald Trump Jr. was not surprised by this offer. He did not ask what Rob Goldstone meant by that verbiage. Nor did Trump Jr. show any caution or restraint in his acceptance of this meeting and the potential information to be shared there. It was all rather routine and somewhat matter of fact. In total, Donald Trump Jr.'s conversation with Rob Goldstone about Russian information that could hurt Hillary Clinton and help his father win the presidency clearly indicates an on-going relationship and pattern of coordination.

He told me via email that, "I would subscribe to your analysis that the email exchange suggests an on-going relationship." He also offers an important qualifier, "although whether this relationship is implicit or explicit remains to be seen. In my view, despite all of the disturbing indicators (reported meeting dates, nondisclosures of meetings between Trump associates and Russians, etc.), charges of collusion between the Trump campaign and the Russians have not been proven." Mowatt-Larssen concludes, "That said, the June 9 meeting has to be considered in the broader context of events that were not known at the time, but which have been established beyond reasonable doubt, i.e., the Russians had been assiduously gathering information on both candidates and were using various intelligence means in order to influence the election in Trump’s favor."

Donald Trump Jr.'s desire to coordinate and collude with Russia must be located in the following context:

As I have argued in numerous essays here at Salon, I believe that Donald Trump is a traitor who has betrayed the United States of America. His inner circle of advisers are likely traitors as well. The Republican Party, its representatives, voters, members of the Right-wing news media, and Trump's other supporters who have defended, denied, or deflected for his administration's relationship with Russia and the latter's role in undermining American democracy are also, in my opinion, traitors.

But does Donald Trump and his inner circle's increasingly apparent collusion with Russia rise to the level of treason? In response to this question, Mowatt-Larssen explained to me that, "It’s a high bar, but intent to commit treason is the essence of what must be proven for Mueller’s investigation to reach a judgment against the president.  In my opinion, it would suffice to define treason as a relationship between the Trump campaign and the Russian government to work together to sabotage Hillary Clinton’s campaign for their mutual benefit."

In his farewell address, President Barack Obama told the American people that regardless of the actions of outside forces, the country and its democratic traditions are strong — but the United States is also quite vulnerable to being undermined from within by extreme political polarization, distrust, intolerance, lack of civic participation, and by abandoning the best principles of the Constitution and the nation's creed. Obama's words were prophetic; in hindsight they were also quite chilling. He knew that Russia and its forces had actively worked to steal the 2016 presidential election from Hillary Clinton and gift it to Donald Trump. President Obama also knew that Trump and his cabal had most likely coordinated with Russia to accomplish that goal.

According to a new poll from Public Policy Polling, the vast majority of Republicans continue to support Donald Trump despite his acts of public collusion with Russia during the 2016 presidential campaign and the mounting evidence of even more sinister meetings (and intent) in private. As if confirming just how effectively Putin and the American right-wing propaganda machine have "flipped" Republican voters against the United States — as though they were characters in a spy novel — Public Policy Polling reports that 77 percent of Trump's voters would continue to support him even if it was proven that he coordinated with Russia to steal the 2016 election.

This is American democracy in its twilight. Such a condition is, I worry, a type of new normal — one ushered in by the Republican Party and how too many millions of Americans value power and "winning" over principle and patriotism.

Where do we go from here? And what does that undiscovered country look like?