A timeline of Justin Bieber's most shameful, hateful moments

Following his ban from China, here's a list of just a few of his most disgraceful misadventures for your enjoyment 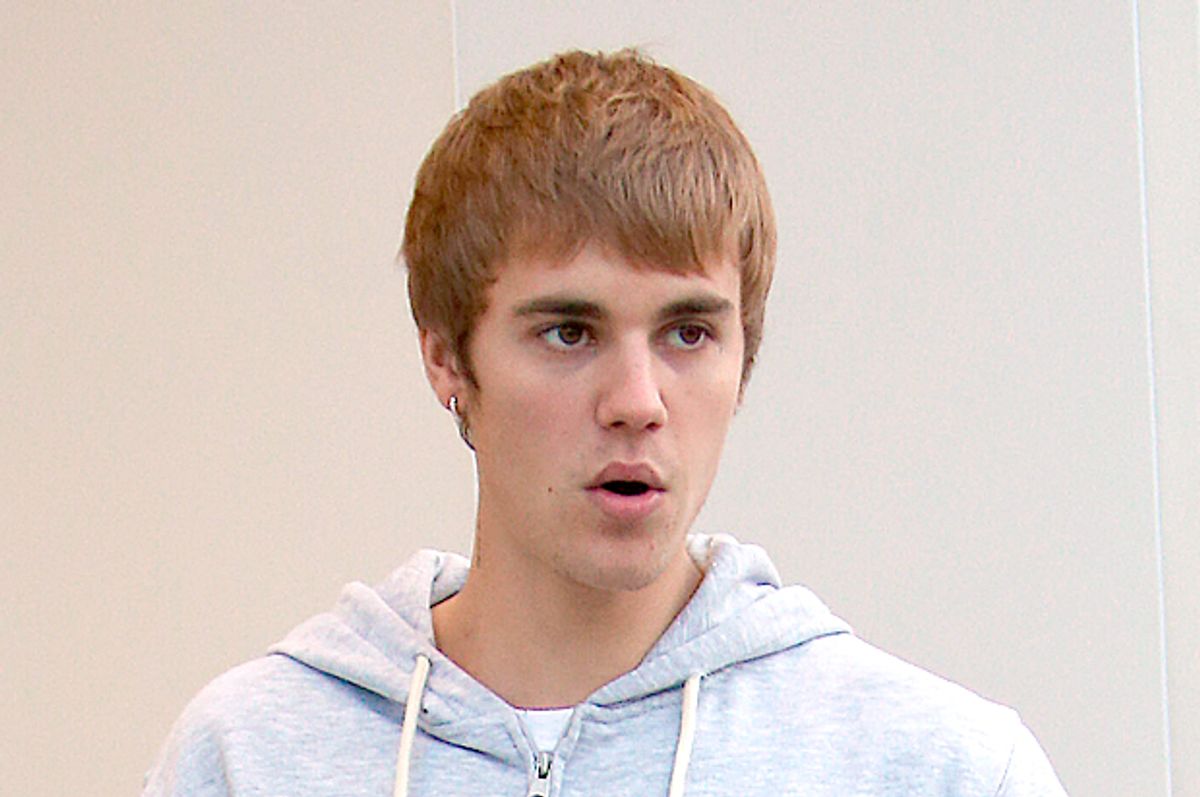 It's no secret that Justin Bieber's past is frustratingly, deliciously sordid. From leaving a brothel in Brazil wearing only a white bed sheet to allegedly fighting with actor Orlando Bloom in Spain, the 23-year-old singer has become just as famous for his egregious, loutish off-stage actions as for his music.

But now, after China banned him from entering the country for "bad behavior," there's an official government policy out there tied to his misadventures — some of which have landed him in jail. Let's cast our memories back for a moment and take a look at just some of the many, many incidents that have marked his transformation from an innocent, doe-eyed teen performer into the target of a restrictive foreign policy.

Now, we couldn't make a list of all Bieber's various trespasses. Time forces a limit on such things. But here — submitted for your approval — are just a few of the incidents that might have landed him on the wrong side of a Communist nation of 1.37 billion people.

May 27, 2012: While at a Calabasas shopping mall with his then-girlfriend Selena Gomez, Bieber took a swing at one paparazzo after the man was reportedly blocking his car.

March 3, 2013: At a concert on the European leg of his "Believe" tour, Justin Bieber left fans furious after arriving on stage almost two hours late because of "technical issues."

April 12, 2013: During a visit to the Anne Frank Museum in Amsterdam, Bieber left an interesting note in the guestbook. "Truly inspiring to be able to come here. Anne was a great girl. Hopefully she would have been a belieber," Bieber wrote.

May 2013: According to a waiver obtained by TMZ, people entering Bieber's house must not disclose through media any information about the activities, parties and events he holds. And if they do, they're liable for a $5 million fine.

May 17, 2013: After his pet capuchin monkey OG Mally was quarantined in Germany because Bieber could not supply the paperwork needed for international travel, Bieber abandoned his pet by not supplying the proper documents. Following the incident, he was forced to pay $8,000 in fees to cover to cost of transporting the animal to Serengeti Park in Copenhagen.

July 2013: In a video leaked by TMZ, Bieber is shown taking a "quick little piss break" in a janitor's mop bucket while yelling "Fuck Bill Clinton" to his friends.

October 2013: Bieber is photographed visiting the Great Wall of China. Instead of enjoying a tour of the great architectural triumph on his own two feet, the singer was carried aloft by his staff in a scene resembling either the progress of an emperor or a Bar Mitzvah.

November 2013: Bieber was spotted jumping into a car outside of Rio de Janerio's notable brothel Centaurus wearing what appeared to be only a white sheet. He was later kicked out of his hotel for "breaking the rules."

Nov. 7, 2013: After a photo of Bieber spraying graffiti on a building in Rio de Janeiro, Brazil, surfaced, the civil police charged him with "defacing a building or urban monument by graffiti or other means."

Jan. 9, 2014: Bieber egged his neighbor's multimillion-dollar mansion and was later forced to pay $89,000 in restitution for the damages he caused. The same neighbor claimed he was threatened and harassed by the singer, and suggested Bieber used anti-Semitic slurs against his family.

Jan. 23, 2014: During a drunken night out with friends in Miami Beach, Bieber was charged with a DUI, resisting arrest, drag racing and an expired license. The singer spent the night in jail.

March 6, 2014:  In a deposition following charges pressed against him for assaulting a paparazzo, Bieber calls the lawyer speaking with him "Katie Couric" as he visibly laughs at him.

June 1, 2014: In a five-year-old video leaked by TMZ, Bieber tells a racist joke while using the n-word. "Why are black people afraid of chain saws?" he says as a friend off-screen tells him to stop. He does not.

June 4, 2014: In another leaked video, footage shows Bieber using the n-word sparingly as he parodies his song "One Less Lonely Girl." In it, he repeatedly sings, "One less lonely n----r," and, "If I kill you, I'll be part of the KKK, but there'll be one less lonely n----r."

July 30, 2014: At a nightclub in Ibiza, Orlando Bloom reportedly punched Bieber in the face following an altercation.

Oct. 23, 2014: During a concert in Manchester, England, Bieber stormed off stage because fans in the front row were screaming, a practice Bieber fans are famous for.

Oct. 29, 2014: Bieber stormed off stage again after performing only one song. He later explained he doesn't "always handle things the right way" and that he was having a "rough week."

April 22, 2016: Just hours after the death of pop legend Prince was announced, Justin Bieber commented on an Instagram picture of Prince to explain he deceased singer was "not the last greatest living performer." His comment received great backlash from fans and he later deleted the comment.