Where is this $12-a-year health insurance? Beneath the amusing word salad, Trump's lack of comprehension is scary 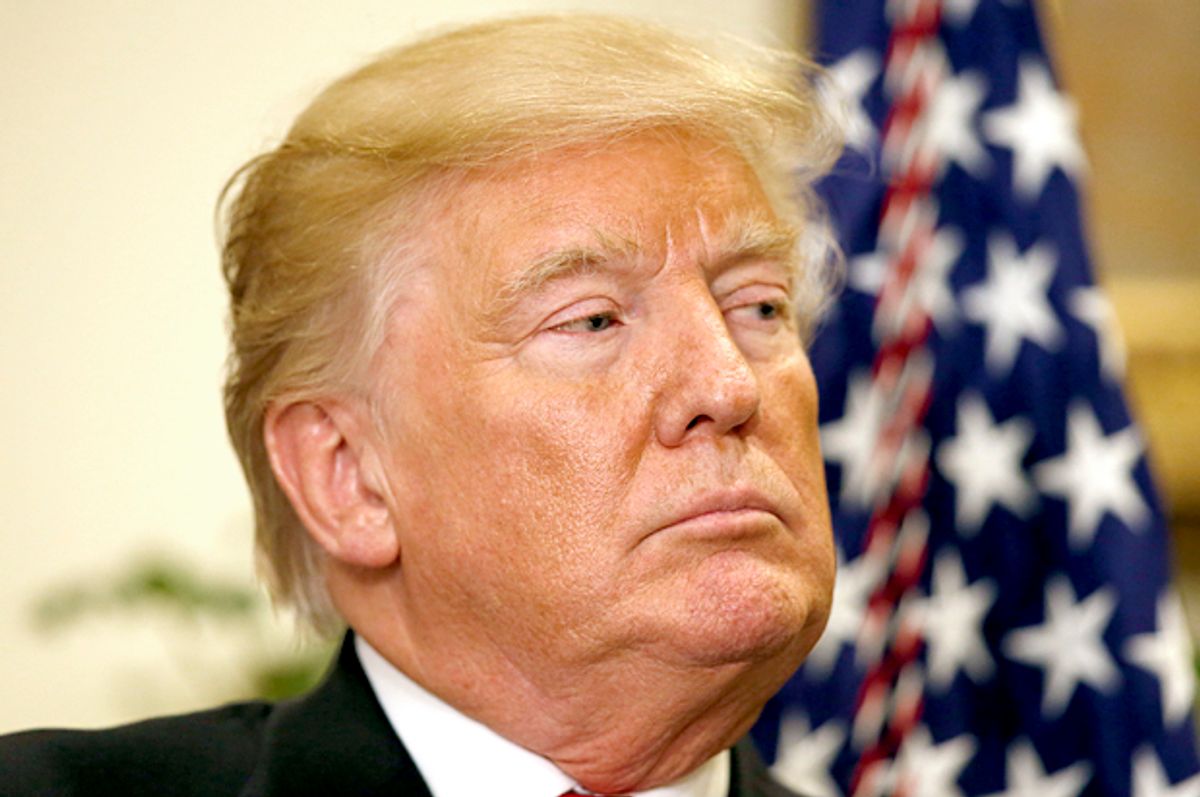 President Donald Trump thinks he knows more about health care than you. In fact, he tends to get downright obstinate when his erudition is questioned. For example, during his lengthy interview with the allegedly “failing” New York Times, the president appeared to channel Fredo Corleone by making sure everyone in the room was aware of his acumen: “This health care is a tough deal. I said it from the beginning. Number one, you know, a lot of the papers were saying -- actually, these guys couldn’t believe it, how much I know about it. I know a lot about health care.”

The truth is, Trump knows less about health insurance than just about any adult chosen at random. Knowing the context, his ignorance about Trumpcare, Obamacare and, generally, the entry-level basics of health insurance is more problematic than ever since he continues to cheerlead for legislation that would significantly meddle with one-sixth of the economy while eliminating coverage for countless millions of Americans.

Thankfully, the Times interview pulled back the curtain on Trump’s unforgivable ignorance on the topic more than any other publication or network has managed to do -- so far. We still need an intrepid news anchor to convince the president to sit down for a detailed and comprehensive discussion about the finer aspects of how all of this works in order to get a fuller appreciation for how dangerous it is that a man of this level of ineptitude is monkeying with our health care. For now, his remarks from this past week will have to do.

Let's set the stage: Almost immediately following the demise of the latest version of Trumpcare earlier this week -- a bill that would have left 22 million additional Americans without health insurance -- the president called for a direct repeal of the Affordable Care Act (ACA). It's worth noting that without 60 votes Senate Republicans can only repeal the budgetary half of the ACA, and not the consumer protections, essential health benefits and other corporate regulations in the law. They can, however, bleed the marketplaces and other coverage to death by killing the subsidies, the taxes, the Medicaid expansion and so on with a reconciliation vote of 50-plus.

The Congressional Budget Office on Wednesday released its latest report detailing the consequences of a full repeal of the ACA. Briefly put, Connecticut Sen. Chris Murphy's prediction was spot on: repealing the ACA would trigger "a humanitarian disaster of incomprehensible scale." For starters:

All told, a repeal of the ACA would statistically return us to pre-2010 healthcare. That's 32 million people, including yours truly, whose insurance would be eliminated, leaving us either to go without medical care or to go broke paying for it. We'd return to the days when an estimated 3,750 people were dying every month due to a lack of insurance, according to a 2009 Harvard study. That's a new 9/11 every 30 days. This, or something similar, is literally part of the GOP platform, as well as Trump's presidential agenda. The sole excuse for doing this? President Obama apparently lied about his promise that you could keep your doctor. That’s about it. For this trespass, millions should be punished.

Despite the deadly seriousness of the issue, the president appears to be playing grabass with people's lives -- and, to repeat, he doesn't even understand what he's talking about.

Let’s start with his lunch with Senate Republicans this past week. Seated next to Republican holdout Sen. Dean Heller of Nevada, Trump elaborated on one of the alleged health care solutions contained in the Better Care Reconciliation Act (BCRA):

[Selling insurance] cross country lines -- cross state lines where you have -- where, where it’s almost impossible for insurance companies to compete in different states. We can’t because of unfortunately the 60 votes -- put that here -- but it’s going to come very soon. We’re putting it in a popular bill and that will come and your premiums will be down 60 and 70 percent. People don’t know that. Nobody hears it. Nobody talks about it. But your premiums are going to. We’re gonna have to cross state lines knocked out and you’ll have insurance companies bidding -- you’ll have forms of insurance you don’t even know about right now because that’s the way it works. There’s gonna be tremendous competition.

In addition to making no coherent sense, Trump is clinging to the repeatedly debunked idea that selling insurance across state lines will cut costs. It won’t. In fact, it’s been tried before, specifically in a little known law called “The Affordable Care Act,” and, after five states passed laws to take advantage of the ACA’s authority, insurers chose not to participate. What makes anyone, much less Trump, believe they would change their minds now?

Later, Trump discussed the BCRA in his barely-literate New York Times interview. Responding to a question from reporter Maggie Haberman about taking “back an entitlement,” Trump said:

But what it does, Maggie, it means it gets tougher and tougher. As they get something, it gets tougher. Because politically, you can’t give it away. So pre-existing conditions are a tough deal. Because you are basically saying from the moment the insurance, you’re 21 years old, you start working and you’re paying $12 a year for insurance, and by the time you’re 70, you get a nice plan. Here’s something where you walk up and say, “I want my insurance.” It’s a very tough deal, but it is something that we’re doing a good job of.

Not only is it unclear how pre-existing conditions (“a tough deal!”) factor into this rant, but it appears as if Trump believes that health insurance benefits accrue or vest over time. They don’t. Nor is it possible under any law anywhere in the U.S. -- state, local or federal; passed or proposed -- for anyone to buy insurance for one dollar a month. Not even the chief architects of Trumpcare are promising such a deal. It’s also possible that he’s getting health insurance confused with the unworkable “health savings accounts” proposal. Who knows?

It’s fun to hector the president for his word salads, but it’s more than a little terrifying to witness how little he knows about the system he’s willing to deconstruct, and about the countless lives he refuses to acknowledge would be irreparably harmed by this horrendous law.

Yes, it’s readily observable that certain voters prefer chief executives who aren’t any smarter or any more experienced than they are. Republican voters seem to prefer folksy over informed; slow-witted over engaged; self-made over educated; plain-spoken over oratorically gifted. There’s something to be said for political leaders who know how to engage with average voters, but this should never come at the expense of elevating leaders who actually know more than we do about a variety of globally important topics.

I don’t want a president who’s as smart or as stupid as I am and neither should you. Given the gravity of the issues facing America, especially the health and livelihood of our people, I want leaders who are profoundly smarter, more accomplished, more disciplined and more compassionate than me. Republican voters should want the same, but instead they’ve cursed us with Trump, who seemed to think he could fix health care over lunch. Frankly, I’d rather he spend more time tweeting and playing golf.