There's good reason to mistrust Betsy DeVos on this issue. But a crackdown on campus discussion won't help 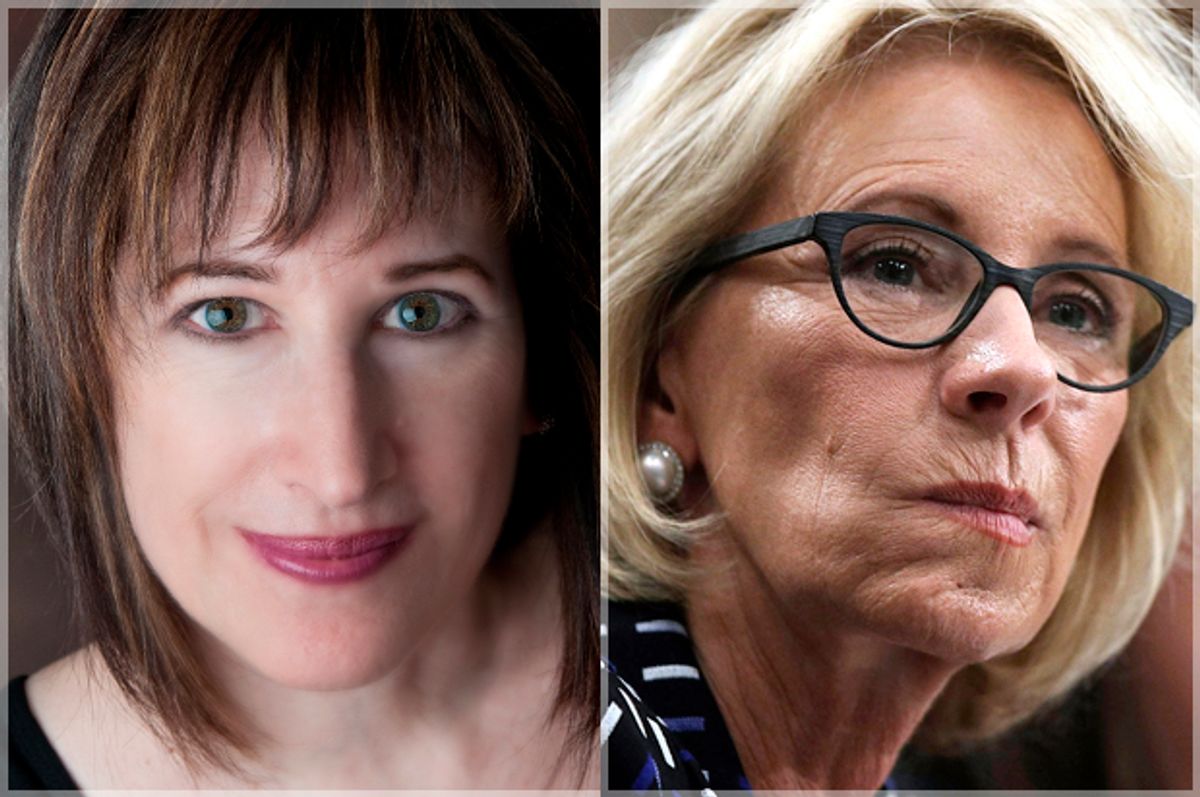 What should we do about the scourge of sexual violence on American college campuses?

I don’t know, to be honest. But here’s what I do know: We’ll never get good answers to the question if we silence each other.

When the federal government threw its weight behind sexual-assault victims by invoking Title IX, the 1972 law barring sex discrimination, I celebrated. But now I worry that the law has become a weapon of censorship, which harms the campaign against sexual assault in the guise of assisting it.

Earlier this month, Secretary of Education Betsy DeVos announced that she would be reviewing federal sexual-assault policies to make sure that the rights of the accused as well as of victims were protected. Under a 2011 order issued by the Obama administration, colleges must discipline people accused of sexual assault if a “preponderance of evidence” suggests their guilt.

That’s a much lower bar than "beyond reasonable doubt," which is the standard in the criminal-justice system. Colleges failing to institute the new rule can be held in violation of Title IX, which puts them at risk of losing federal funding.

Opponents of DeVos immediately claimed that she was undermining the struggle against sexual assault, while supporters congratulated her for bringing due-process concerns into the conversation. But almost nobody noted that Title IX has sometimes been used as a bludgeon against, yes, anyone who questions the use of Title IX.

Witness the case of Northwestern University professor Laura Kipnis, who found herself the focus of a Title IX complaint in 2015. Her alleged transgression? Writing an article in defense of a fellow professor who had been charged with sexual misconduct with students.

To Kipnis, the accusations against her colleague reflected the excessive policing of sexuality on campus and the coddling of female students. But to her critics, including the two alleged victims of her colleague, she was engaging in “retaliation."

That’s illegal, under federal law. So is creating any kind of “hostile environment” that targets women or other protected groups. But it turns out that you can invoke that rule to prohibit, well, almost anything.

Meanwhile, a professor at Louisiana State University was fired for describing someone who had exhibited cowardly behavior as “being a pussy.” She also joked that sex got worse as relationships got longer.

The professor said she made these in-class comments to get students’ attention, but the university said she was “creating a hostile learning environment.” It was the school’s legal duty to sanction her, or so officials claimed.

Indeed, someone on my own campus could read this column and claim that it created a hostile learning environment under Title IX. My hope is that they would be laughed out of the dean’s office. But how can I be sure?

True,Kipnis was eventually exonerated by Northwestern. But that was after many months of Kafkaesque investigation that she details in her new book, "Unwanted Advances." The dismissed Louisiana State faculty member hasn't been so fortunate, at least not so far. She has sued to get her job back; in reply, the university said it would “vigorously defend ... students’ rights to a harassment-free educational environment.”

Let’s be clear: For too many years, our colleges and universities swept sexual assault under the rug. That’s why I applauded the aggressive stance taken by the Obama administration, which put all of our institutions on notice that sexual violence would not be tolerated.

But we won’t serve that cause if we do violence to our basic traditions of free speech. Of course, no professor should be allowed to sexually harass students or make truly threatening remarks. But when we call any controversial statement about sex — or about Title IX itself — a form of harassment or threat, we empty these terms of their meaning. And we make it even more difficult to establish a sound policy on sexual assault, which — like any public question — can only benefit from a full and free public debate.

So if you don’t like what Betsy DeVos has been saying about campus sexual assault, by all means say so. And if you don’t like this column, shout that to the rooftops as well. Just don’t try to shut down discussion on the subject by claiming that the words assault you. That’s simply not the American way. And it won't work, either.