“The Wrong Light”: Sex, lies and the story of Mickey Choothesa 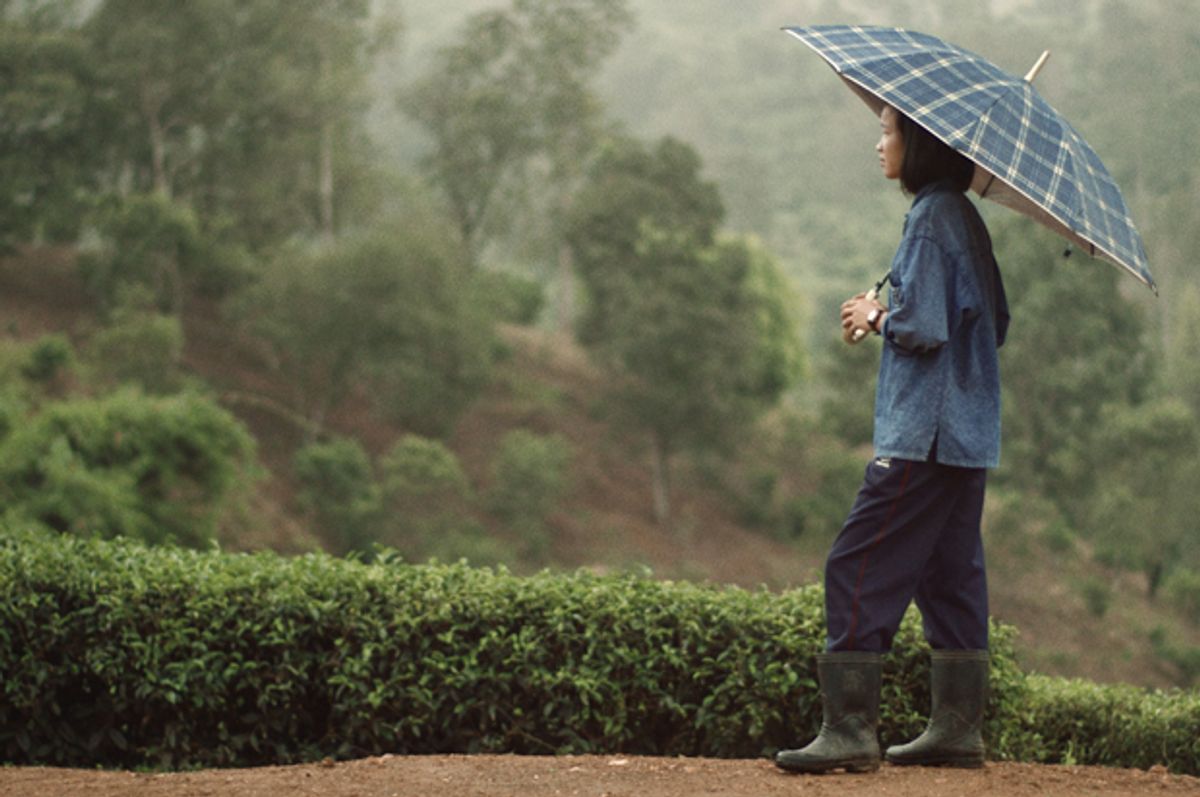 That’s how director Josie Swantek Heitz, her face stunned and expressionless as she leans against a wall, informs director/cinematographer Dave Adams that they have been hoodwinked. This discovery occurs moments into the intro of their film “The Wrong Light,” a thought-provoking documentary about trafficked girls in the stateless Hill Tribe communities that border Northern Thailand. After this initial confusion — we don’t yet know yet who this whispering, semi-catatonic white woman is — we are suddenly plunged headlong into the world of Mickey Choothesa and COSA (Children’s Organization of Southeast Asia), a nonprofit organization and shelter that Choothesa founded in 2006 to provide sanctuary, shelter and education to these same vulnerable girls.

But then something doesn’t add up. The mountains are misty and evocative but the stories, translations and dates conflict. A half hour in, the film flips to include an intricately woven fiction that fooled everyone, including both filmmakers, the producers, a slew of international donors, a parade of interns, and even foreign correspondent Adam Ramsey, who did a story on Choothesa for VICE in February of 2015. (VICE has since posted a disclaimer.) Suddenly, the “The Wrong Light” balloons to include Heitz as the catfished subject searching for The Truth. Only what, exactly, is The Truth?

“I was researching the Somaly Mam — the face of anti-trafficking in South East Asia whose stories ended up being fabricated — for Mariane Pearl but decided she was too controversial,” Heitz tells me over Skype from Washington, D.C. She pauses. “To think I could take on this project and not have the same initial doubt. Mickey, like her, was very skilled in duping people. You get swept up in it.”

Heitz’s doubt raises some questions. The first being why: not so much why Choothesa did it (that seems obvious enough), but why so many otherwise discerning people and agencies are swept up by these supposedly saintly charlatans prostituting hope. In the case of the Somaly Mam, who it must be noted, also looked like a model, Glamour Magazine, the State Department, Hilary Clinton, Susan Sarandon and Angelina Jolie were taken in. Meanwhile Peter Baines — a forensic investigator! — donated upwards of three quarters of a million Australian dollars, without doing his homework, so that COSA could build a second shelter to house even more girls. It is as though the notion of witnessing pretty girls being trafficked and then the catharsis of their daring rescue produces some kind of moral tourism that nudges people into opening their hearts and wallets without further investigation. Or as though being connected to the hagiography makes us feel better about ourselves and our shitty lives, so why dig deeper. Just keep CrowdRising, people.

Hired by Shine Global, Adams and Heitz went to a village North of Chang Mai to shoot a film about trafficked girls in 2013. Apparently, Choothesa had informed producer Susan MacLaury about closed community “meetings” in which daughters were being sold without their parents having a full understanding of the repercussions. Both filmmakers had reservations about this lurid topic, but also felt there was the possibility of finding “a deeply interesting and personal story there.” Not the tragedy porn aspect, mind, but the idea of exploring the trafficking from the side of the parents. Choothesa was only there to act as liaison and translator to this closed world in terms of language, custom and culture. He was also going to grant access to the 34 girls at Baan Yuu Suk, the COSA shelter, and was going to translate their extremely disturbing stories — some of which were also on his website for all to read in English.

“In all documentaries you find your own fixer and translator,” Heitz says. “But Mickey launched a campaign against her saying she would be considered an outsider and offered himself and we believed him. We thought he was the busy director of an NGO.”

Next thing you know, Thai-Indiana-Jones-Meets-Miss-Hannigan fills the screen with his face and his mansplaining, ponytailed presence. He’s given to proclaiming things like, “selling their daughters is a matter of survival” in a way that seems simultaneously deep and obvious. Is it because of the prologue that I know he’s a creeper, or is he just a creeper? Note: I used to have this same icky feeling about the Romanian gymnastics team coach, Béla Károlyi. Why does this grown-ass man want to spend all his waking hours with pre-pubescent gymnasts? And why are they always hugging?

As we meet the sweet young girls of COSA and hear them talk about “Uncle Mickey,” we then begin unpacking how it is that a mother — a mother! — can sell her own child without fully understanding the repercussions. (Though prostitution is technically illegal in Thailand, it still ranks among the worst sex trafficking offenders in the world.) The privileged Western mind, obsessed as it is with the ACA, boggles at this decision: selling your own child to support your family or to give her a chance at a better life! What? It’s discomfiting to witness this level of poverty. The white savior desire kicks in and we possibly overlook discrepancies.

Meanwhile, the three main subjects of the film, Fon, Gan and Eye, all bright and smiling and oddly infantilized given their supposed recent predicament, at times appear weepy and traumatized and at other times scripted. Fon’s story, molested by her father and her uncle and then sold to a pimp by her own mother, is harrowing. She and Gan weep as they clutch each other in the back of a truck, watching as their village recedes in the darkness. For the next three years both girls service a multitude of men in a brothel.

And then there's Eye, whose mother is trafficked from Burma and whose aunt is about to sell her to a man who owns a gas station -- that is, until her teacher tells her about Uncle Mickey and COSA. The filmmakers read about Eye’s story in an email from Choothesa that was also on the COSA website. Meanwhile, Eye is running for tenth-grade class president, which feels both Mayberry-ish and strange. How can somebody who has undergone that level of trauma merrily bop around her high school getting votes? Why doesn’t she have PTSD? WTF is happening?

After the filmmakers get wise to the grift, they bring in their own translator, who speaks not only Thai, but also Mien, the regional dialect that the families of the allegedly trafficked girls speak. This cracks the case. “Mickey weaponized the girls by Westernizing them,” Dave Adams says. “They were surrounded by Westerners and Western thought and interns and yoga teachers so they opened up to us.”

“When COSA was bustling there were new voluntourism groups coming in all the time,” Heitz adds. “The experience they were getting was unparalleled.”

While “The Wrong Light” telegraphsChoothesa as a looming menace, VICE reporter Ramsey describes him with something akin to bro worship. When I spoke to Ramsey on Skype to alert him, he was suitably horrified and told me he thought Choothesa's story seemed “apocryphal,” and yet, speaking of fake news, why didn’t he vet COSA further, or Choothesa for that matter? Choothesa claimed to be a war photographer, but it turned out his photos were taken from the internet. Additionally, COSA was never a 501c3, or if it was, it became one at the eleventh hour. Now that the whole operation has been shut down and Choothesa is at large, these details are even murkier.

Admittedly, it is tough to decipher the truth. The uncomfortable question that remains is what if some aspect of Choothesa’s trafficking story is true? How much of a lie is a lie?  Is it bad to sell your child if you think it’s for a better life for them?

“The question that is still in our minds is how much did the girls know?” Heitz says.

Choothesa, for all his embezzlement, actually housed and fed 34 girls at Baan Yuu Suk and paid for their educations. That was real. This is why both the filmmakers and the community were reluctant to speak up even when they sensed that something was shady. For Thais, there is also a desire to save face rather than make a scene. Regardless, following the allegations, COSA closed shop in Thailand and both the U.S. and Australian donors — mostly Peter Baines and his organization Hands Across the Water — arranged new housing and education for the girls who had been living at Baan Yuu Suk. Recently, someone reached out to Baines about a reference for Choothesa, who is apparently soliciting funds for a new organization. Baines declined, but it seems life for Choothesa continues apace.

“The Wrong Light” ultimately emerges as a fascinating testament to the power of story and the way that people glom on to pretty female faces as buoys in in a dark sea. The same way it’s easier to understand a crime about violating the innocence of a pretty child, it’s easier to embrace the rescuer of that child as a cardboard hero, so why bother figuring out what’s true? Of course, rescue is also a convenient myth. As is the John Wayne narrative of a man who storms in and saves sweet little girls from the nefarious clutches of Evil Doers. That isn’t the antidote here. The truth is, there may be no antidote. In fact, at the end of “The Wrong Light,” more is revealed about Choothesa that we would rather not know. Uncle Mickey was really as creepy as he seemed.

“Lies cannot live forever,” Eye says at the end of the film. But can’t they?