“This is what democracy looks like”: Why Black Lives Matter is a struggle to save our democracy

Documenting the Ferguson uprising, the film "Whose Streets?" is a powerful account of the future of black activism 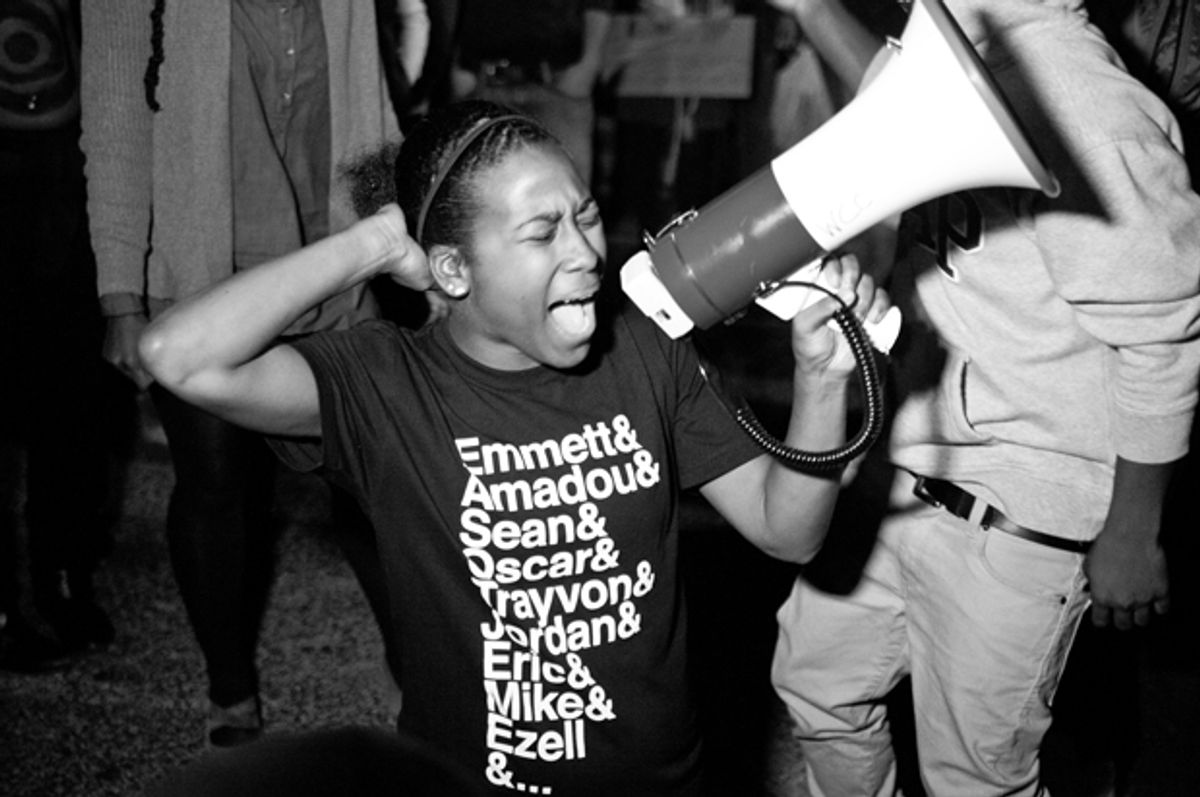 During the presidential campaign, there were regular stories of protesters being attacked at Donald Trump’s rallies.  In one particularly disturbing example, a Black Lives Matter protester was punched and kicked as he lay on the ground at a rally in Alabama in November 2015.  In the video taken of the attack, Trump is heard yelling, “Get him the hell out of here!” Later when asked about the incident, Trump replied, “Maybe he should have been roughed up. It was absolutely disgusting what he was doing.”

The concept that fighting for black lives is “disgusting” is at the heart of a powerful documentary about the uprisings in Ferguson, MO that took place after unarmed Michael Brown was shot to death by a police officer on August 9, 2014.

Directed by Sabaah Folayan and Damon Davis, “Whose Streets?” focuses on how the death of Michael Brown served to catalyze a community into action. “Whose Streets?” forces viewers to face the reality that when black protesters fight for their rights as citizens they are regularly seen as “disgusting” or as thugs, rather than as people legitimately protesting a system that denies their basic right to life.

The film is divided into five chapters that roughly follow the chronology of the events in Ferguson, when unarmed Brown was shot multiple times by 28-year-old white police officer Darren Wilson and left lying in the street for more than four hours. But the real art of the film is not in the way it captures the unfolding of events; it is in the way that it offers viewers a unique form of storytelling that humanizes those in the Ferguson community and offers a model for future activists.

The opening sequence sets the stage for the whole film.  The film begins in the interior of a car driving through the rain at night. We hear that the car is about to pass through an intersection that brings together three of the four poorest zip codes in the St. Louis area. The driver of the car mentions that these neighborhoods have the worst schools in the area and then remarks on the irony of a school system that asks parents to help their kids with homework when the parents themselves don’t know how to do it. Another passenger then points out that the current school system is simply the legacy of slavery — a strategy to deny black kids an equal future.

Remarking on the horrible living conditions in the community, we hear, “I don’t know what year it is, but it isn’t 2014.” Emphasizing the lack of historical progress for black citizens, the film then offers a quote from the 1857 Supreme Court ruling in the Dred Scott case that denied slaves basic human rights. The message is clear: We are not as far from Dred Scott as our nation would like to think.

If you aren’t up on the details of Brown’s death and the investigations that followed it, you will want to refresh your memory before seeing the film, because covering those details is not its primary goal. Rather, “Whose Streets?” is a film dedicated to revealing how a community rose up in the face of injustice and helped foster a social movement.

The film has a series of themes all of which revolve around the crisis our nation faces in its treatment of black citizens.  Filled with footage shot by members of the community, the film emphasizes the fact that protesters in Ferguson were denied their basic democratic rights and treated like criminals when they sought to peacefully mourn a member of the community.

Ferguson was treated like a war zone almost from the moment that Brown was shot and the community was denied their right to witness the treatment of the body. As the film covers the events we see protesters armed only with signs, chanting “hands up, don’t shoot,” while the police are dressed in riot gear, armed with machine guns.

Later the National Guard arrives in armored vehicles and begins shooting rubber bullets and using tear gas. One of the protesters remarks, “We are trying to mourn and you show up in riot gear.” Another states that he saw no difference between the West Bank and Ferguson. Yet another refers to the events as an “unseen war.”

One of the most powerful moments in the film takes place as we see some of the protesters crack from police pressures and attack a convenience store. While the leaders of the resistance don’t advocate violence, they do find the response to the destruction of property telling. Once a store window was broken, the police and the media were outraged. And yet, nothing similar happened when Brown was shot dead on the street. The concern over store looting makes it clear that in Ferguson property has more rights than people.

Besides emphasizing how black citizens in Ferguson are systematically repressed, the film’s second key theme is that the media has played a central role in demonizing black lives. “Every day, Americans experience a mediascape that humanizes whiteness, delving into the emotional lives of privileged white protagonists while portraying people of color as two-dimensional and mostly negative stereotypes,” write Folayan and Davis in their directors’ statement. Showing how college-bound Brown was portrayed in the media as a "thug" and a "criminal," the film suggests that the institutionalized racism in the police force is equally matched by the racist practices of the mainstream news media.

Countering the desensitized coverage of Ferguson by the news media, “Whose Streets?” is deliberately a different type of story, one that humanizes the protesters through a creative use of collective storytelling.

The real art of the film takes place in the unconventional way that it builds connections between the viewer and the activists. While we are introduced to several activists in a traditional documentary format, the film makes a point of not allowing the viewer to become overly invested in stories of isolated individuals.

This technique is the one that is most likely to vex viewers and critics expecting a predictable narrative arc. One reviewer remarked that one of the film’s flaws was “the inadequate focus on a handful of key individuals prominent in the struggle.”

That reading, though, misses the aesthetic brilliance of the film.  “Whose Streets?” refuses to tell the story of the political awakening of Ferguson through a focus on individuals. Even though the film clearly features a few prominent leaders in the struggle, it most clearly sees the whole community as the collective protagonist of the story.

Thus the art of the film’s storytelling is in the way that it humanizes a community often depicted like a demonized mass, while also offering examples of remarkable activists that can serve as role models.

Throughout the film the fact that the protesters are struggling for their rights as citizens is emphasized in their chants: "We want answers," "We are human," "Hands up. Don't shoot," "We have nothing to lose but our chains," “This is not Iraq, you guys are the aggressors,” “We don’t do this because we hate the police; we do this because we love each other.” But it is the phrase, "This is what democracy looks like," that really underscores the crisis covered in the film.

On the one hand, the phrase reminds the audience that protest is a central feature of democracy. On the other hand, the phrase emphasizes the fact that our so-called democracy acts more like a repressive regime for many in the black community. The phrase encapsulates both crisis and hope and it sets the tone for the whole film.

In the last chapter of the film, the Justice Department releases a report that confirms what the black citizens of Ferguson knew all along: “The Ferguson Police Department was routinely violating the constitutional rights of its black residents.” But while the report is a gratifying acknowledgment of institutionalized racism, it is treated more as a starting point than as closure.

As the film ends one of the activists remarks that, “if there is going to be any change, it’s going to be with our children.” Thus the last core theme of the film is in the way that it shows children participating in protests, leading chants and reflecting on the movement.  Circling back to the opening lines of the film that pointed out the poor state of Ferguson schools, we hear that the community is “overincarerated and undereducated.”  Closing shots show community members working with kids to raise the next generation of activists.

At a time when protesters struggling against systemic racism are regularly mocked or demonized, “Whose Streets?” insists that the refusal to take seriously these protests is a sign of the failures of our democratic system. Gentle and fierce, “Whose Streets?” is an uncompromising look at how this new generation of activists are today’s freedom fighters.

“Whose Streets?” opens in theaters on August 11.