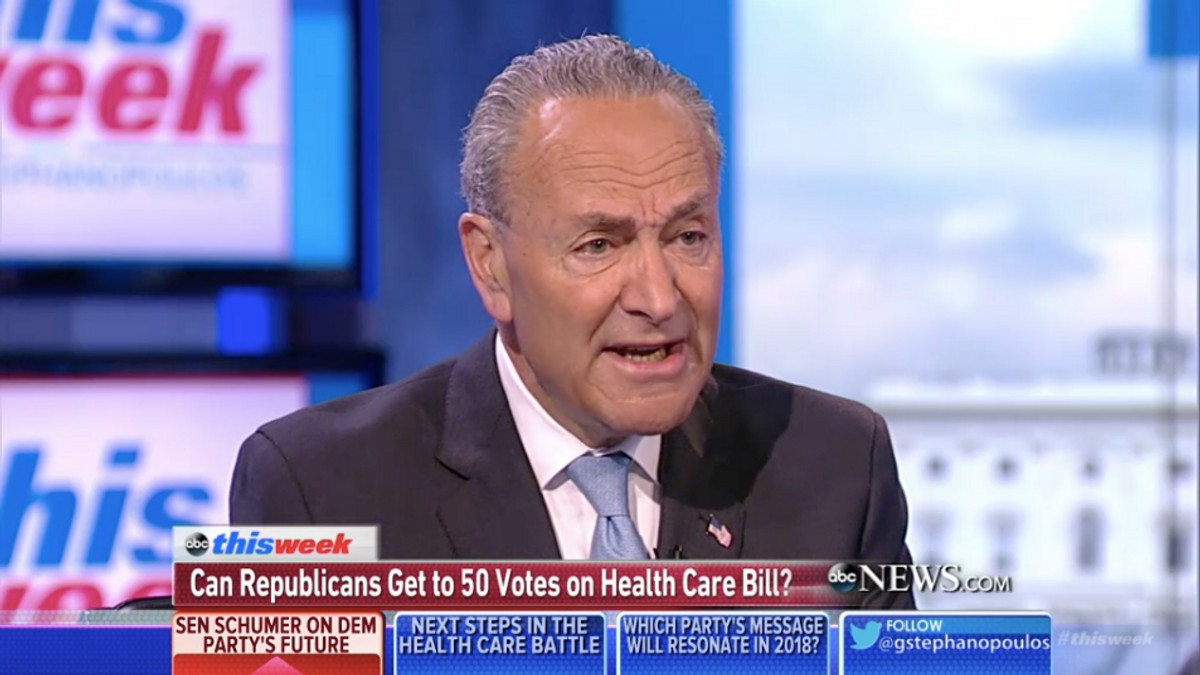 Senate Minority Leader Chuck Schumer D-N.Y., discussed the new economic agenda for the Democratic Party moving forward, and said on Sunday that a single-payer health care system is an option that's on the table.

Featured on ABC's "This Week," Schumer was asked about a recent poll which showed that 52 percent of Americans felt that the Democratic Party only stands in opposition to President Donald Trump, rather than having an independent identity with a clear message. When asked why Americans don't know what the Democrats stand for, Schumer said some of the responsibility falls on the party.

"Well, it is, in part, our fault. When you lose an election with someone who has, say, 40 percent popularity, you look in the mirror and say what did we do wrong?" Schumer said. "And the number one thing that we did wrong is we didn't have -- we didn't tell people what we stood for. Even today, as your poll showed, they know we're standing up to Trump. They like that. But they want to know what to you stand for?"

The Democrats plan to roll out their new economic agenda "A Better Deal," on Monday, according to Schumer. "It has three components. We're going raise people's wages and create better paying jobs. We're going to cut down on their everyday expenses they have to pay. And we're going to give them the tools they need to compete in the 21st Century," he said.

Regarding health care Schumer said that the Republican health bill in the Senate is "very unlikely to pass, because it's rotten to the core."

"People are not for reducing taxes on rich people or getting rid of Medicaid, which is a very, very middle class, now, thing, as well as for poor people," he said. Schumer said he hopes that the Republicans will work with the Democrats and slammed the secretive nature in which only a few Senate Republicans designed the health bill that has yet to receive enough support from within the party.

Schumer said the Democrats will also look at "broader things" and that "single payer is one of them."

"Week after week, month after month, we're going to roll out specific pieces here, that are quite different than the Democratic Party you heard in the past. We were too cautious. We were too namby-pamby," Schumer said.