Issa Rae's comedy about living single in L.A. is even sharper and bolder than before 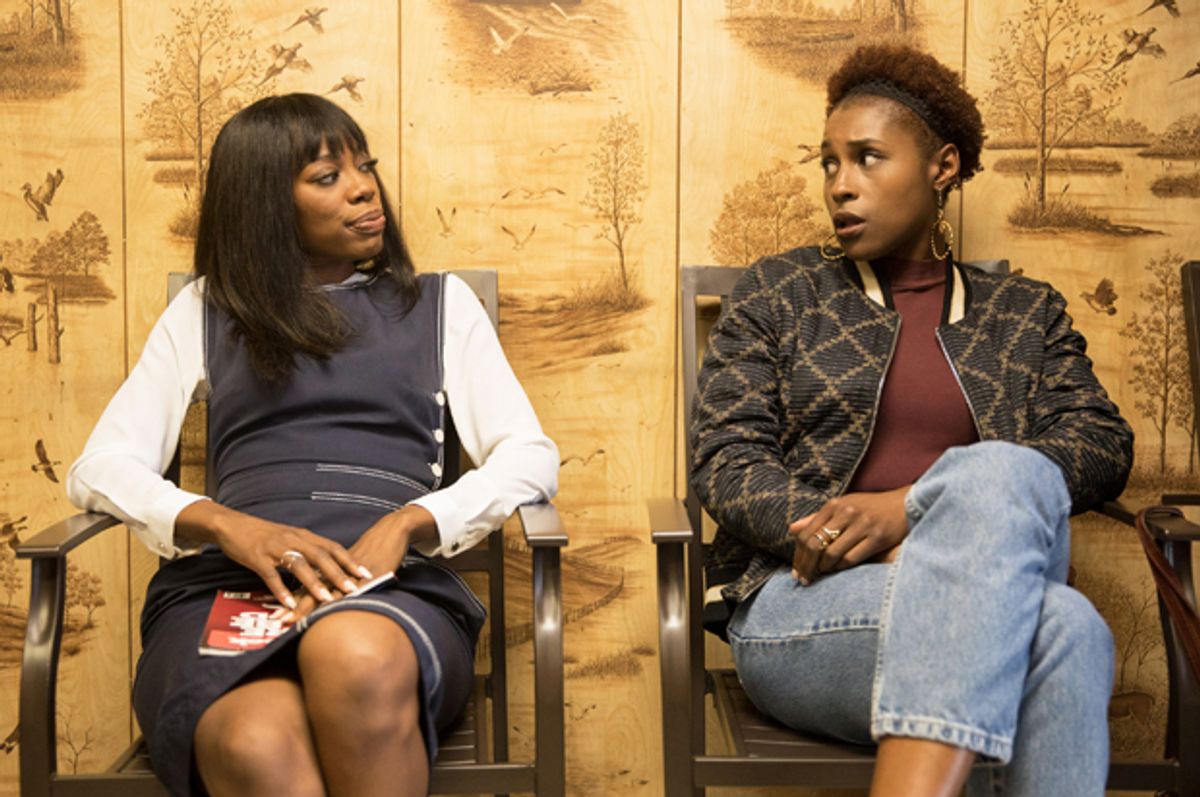 Early in the second season of "Insecure," Issa Dee (Issa Rae) holds a gathering at her place that leaves a memory on her wall, forcing her to throw a painting party for one. Very quickly, though, her handywoman skills leave much to be desired: Issa forgets a necessary step and causes a mess, and she nearly passes out from the fumes.

Once the job is complete she stands back and surveys her fresh accomplishment with a bright smile. Only then does she notice that she missed a spot – a huge one. She points an accusatory finger at it and whispers, "You can't have my joy."

A lot of the comedy in "Insecure" follows this pattern, as characters fail to consider the big picture because they're too busy staring as a small piece of it. Issa, her best friend Molly (Yvonne Orji) and their friends have license to do this as 20-something professionals relishing something akin to a second adolescence in the Los Angeles. But even as they negotiate the freedom of flying solo and disposable encounters, they can't quite figure out why true connection eludes them.

"Insecure" depicts L.A. as a playground accessible to everyone, not just the rich, and watching Yvonne and Molly groove through it is one television's finer pleasures. Director Melina Matsoukas films their escapades with such affection for the setting that even when the girls strike out during their many visits to parties like Kiss-n-Grind or their regular cocktail spot, the viewer never does.

The second season, which kicks off Sunday at 10:30 p.m., flows with more confidence and pluck than the first right off the bat — a good show that has only improved. Often a second season pick-up is the endorsement a creator needs to relax into her vision. Rae certainly has.

Rae's Issa remains at the center of "Insecure," and the visual interplay between her external image and her internal voice makes her character honest, flawed and incredibly funny. There's the Issa who psyches herself up with pep talks in bathroom mirrors and the Issa the world sees, one whose eyes are often wide with confusion or awkward disappointment. Loving both is easy enough.

Season 2 flips the dynamic between Issa and Molly. Previously, the latter had more experience at hunting for romance and casual sex. But if dating is tough for Molly, it's damn awkward for Issa and far less so for Lawrence (or if it is, the awkwardness is of his own making.)

Often when a central couple in a show break up, there's a compulsion among viewers to presume that the writers will find a way to bring them back together. But Rae and showrunner Prentice Penny use Issa and Lawrence's separation to show the different challenges black men and women face after they get "out there."

Issa is unskilled with the rules of hook-up apps and bar pick-ups. She's even more awkward during skin-on-skin scenarios; every touch is foreign and every lover has a different strategy. But Lawrence, who spent most of season 1 sulking and depressed, blossoms in these new episodes and enjoys the buffet of opportunity that a tech job, and the moneyed social circle that comes with it, opens up for him.

Even Issa's co-workers at the non-profit where she works (We Got Y'all, one of television's most cluelessly named and operated organizations) come off better than they did last year — Issa's well-meaning if bumbling partner Frieda (Lisa Joyce), who may provide a legitimate lesson for Issa in these episodes, in particular.

As I observed in my review of the first season, "Insecure" travels a specific version of the African American experience without explicitly calling out its specificity. Issa, Molly, Kelli, Lawrence and his friend Chad (Neil Brown Jr.) make their choices based on what they desire and what's available in the moment as opposed to considering longer-term ramifications. And while that creates conversational dialogue that's funny and real, it also leads to more sexually frustrated nights for Issa.

But "Insecure" refuses to paint its characters as lonely – foolish, sure, but never pathetic. Molly is not as thirsty as she was last season and Orji's winsome portrayal allows her to unwind a little more in year two. Her subplot is one of several that explore the tricky nature of bias. After she discovers a that white male colleague is making significantly more than she, she finds herself bouncing up against her firm's entrenched boys club.

The writing in these new chapters also fleshes out auxiliary characters that deserve more screen time, including Natasha Rothwell's outrageous Kelli, a woman who embraces being unattached with a gusto that can be shockingly comic.

One diner scene allows Rothwell, who was upped to a series regular for season 2 deservedly, to stealthily roll out a physical gag that's jaw dropping, disgusting and bold all at once. Kelli adds an unapologetic licentiousness to the show's examination of single life in a major city, because in the way of many dating and mating storylines, many of the meet-cutes and the "never minds" in the new season of "Insecure" grow out of the terror of too many choices.

The second season also spends more time examining where the worlds of black professionals and white ones intermingle, especially through Lawrence. Here he discovers the odd perks of being a black man in an industry and parts of town that are overwhelmingly white. Though his subplot, "Insecure" examines the differences in sexual expectation and social boundaries as well as looking at hard truths about class divisions.

But these ideas run naturally through the dialogue and the story's stream, viewing them in the context of what these characters want. In one episode, it's the difference between spending time at a barbecue in the park or at a start-up party where the liquor pours freely. In another, it's a character setting up a meeting point at a party where the entire premise is to dance and hook-up, so that everybody has a fall-back option.

The fun of "Insecure" is that Issa, Molly, Lawrence and the rest live life in a way where there are no terrible choices, but no choices that feel absolutely right either. There are only adventures, mishaps and satisfying bursts of joy.