When the 1967 Detroit riot came home

50 years ago, my father, a Detroit cop, was hosting a party on his day off. Then he got called in to work 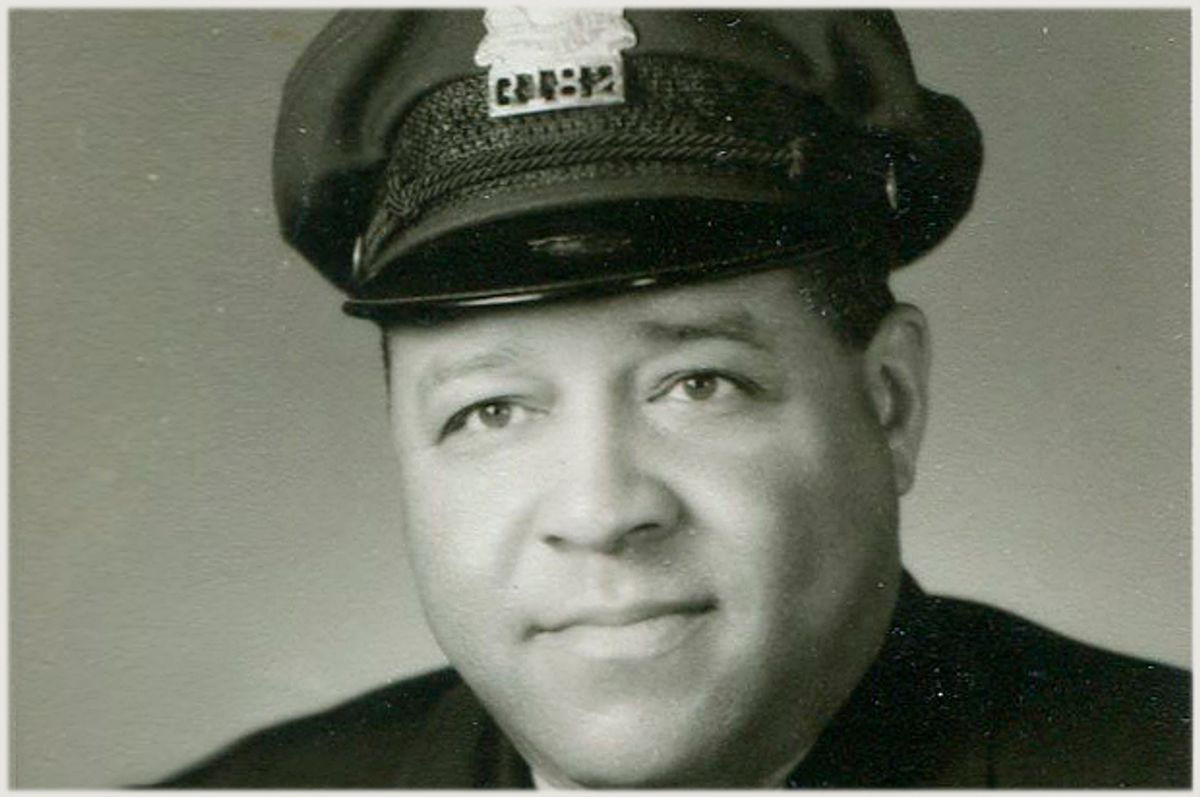 In 1984, when I was starting my journalism career, I met writer, teacher and political activist Amiri Baraka in a bookstore on Chicago’s south side. He was signing his 500-page autobiography.

“How,” I asked the man who was at the center of the 1960s Black Arts Movement, “did you remember all this? Did you take notes?” He gave me a wry look and said, “you remember what’s important.”

You do. I know that now as I remember back 50 years ago to Sunday, July 23, 1967. I remember my father threw a family barbeque that came to an abrupt end because he was ordered to report to work. He was a Detroit police officer. Sunday, July 23 was the first day of Detroit’s 1967 riot.

My father was Andrew John Humphries. In 1967 he was a sergeant with the Detroit Police Department. The day the riot started he was scheduled to be off-duty.

Perhaps it was not the best time for a party. Mama and their thirteenth child — a baby girl — were just home from the hospital, and his mother-in-law was mad at him for giving her daughter another child. He had to do something besides accept cigars.

So he invited my mother’s family to join us for a backyard barbeque.

It was such an event, my father’s party. But who knew at the time it would be momentous?

It was a hot day. It had been a scorching weekend. It would be a fiery week. And the riot’s first day blistered me with an understanding I did not have before: My father risked his life for a living.

What I knew is that he was respected on our street. He looked imposing in his uniform, and I felt proud to be in public with my father, the police officer. I felt this especially in summer when he took his children to work with him to patrol the Detroit Zoo, Tiger baseball games, the State Fair, Fourth of July fireworks and Belle Isle park.

We kids played Rock School, Hopscotch, Hide and Seek and marbles. The adults drank beer while talking at the fence. They lined the kids up for a photo: 19 of us. I am the tall, grinning 14-year-old, skin bronzed by sun.

My sister Paula is the big kid in one photo that also shows our father in the background bending over a grill made of an old washtub set up off the ground on bricks, oven racks laid over the opening. At his foot is a pile of newspaper to start the fire.

My grandmother sounded the first alarm when she called to say there was a riot. WJR or WWJ radio reported that in the early Sunday morning hours, Detroit police had raided an after-hours drinking establishment. Then a crowd gathered. Someone threw a brick. Somebody fired a gun.

A few minutes after my grandmother hung up, the phone rang again. I answered to hear a deep voice asking for Sergeant Humphries. I ran out to get my father, and he hustled to the phone. When he hung up, the alarm turned into a full-on drill. As our relatives rushed home to safety, my father got ready to go to work.

My father never wanted to be a cop. He was artistic; he could draw, play piano and sing. He spoke German and invented games. Police officer was a good job he could get, though, because he was connected. His father-in-law, my grandfather, was a Detroit police officer, one of the first African Americans sworn as a Detroit police officer. That was in 1929. My father’s best friend Bruce had urged my father to apply to Ford Motor Company where Bruce was a tool and die maker. “It’s good money, Hump,” Bruce said.

My father said he shied away from the auto industry because of periodic lay-offs, but I think the real reason was sorrow. His father had contracted pneumonia while working in Ford’s steel foundry, and died when my father was 12 years old.

On Sunday, July 23, after his command officer called, my father prepared to leave us. He poured a jug of water over the fire in the washtub grill, and crouched to stare into the embers.

I know what he was searching for, but I wonder, what did he see? Did he see himself 20 years earlier, the young police recruit in 1947, one of only five African Americans in his police academy class. That was the largest number of African Americans ever in one class, the newspaper reported. And they made much of it. We still have photographs of my father published in the papers.

One photo showed my father holding the legs of a white recruit in the air in a wheelbarrow race. Another pictured the five new black cops being sworn in as boxer Joe Louis looked on. Another time, my father was snapped handling his police pistol.

African Americans were hired as police officers when black leaders demanded them to serve swelling black communities. Staring down into the drowned washtub grill fire, did my father wonder why the city exploded that day, of all days? Did he wonder how this day was like the contents of the metal tub: bright one moment, and dark and ruined the next? I did.

My father shook his head to snap out of his revelry, and stood up to his height of six feet. He gave me the pitcher to return to the kitchen, but I followed as he headed for the side of our house, where a birdbath sat under a spindly apricot tree. He called to my 13-year-old brother, Andy, his second-oldest son.

Did my father realize then how much good his job as a police officer had done his family? My oldest brother, a University of Michigan student, was away at Army Reserve Officer Training Corps (ROTC) camp in July 1967.

It was a simple task my father directed Andy to do: uncoil the garden water hose, snake it out long alongside the house and screw the nozzle onto the outdoor water faucet. Just in case, until the fire department showed up.

I was puzzled. Why would the fire department be at our house?

Then my father went inside the house. He dialed on the telephone, and said, “This is Sgt. Andrew Humphries of the 10th precinct.” I was surprised when I heard him request “special attention.”

He requested “special attention” every summer from police precinct number 6, our neighborhood station, before he went away for two weeks to Army Reserve camp. “Special attention” meant a marked patrol car rolled by our house at least three times a day because, as my father told the dispatcher on Sunday, July 23, 1967, “My wife is home alone with 13 children.”

That made me afraid.

He had never called for “special attention” when he went to work. What about going to work would require special police attention for us? My father’s shift was eight hours. He’d be back at midnight like always, right? Right?

How long would he be gone?

I didn’t know that answer was this: Anything could happen in a riot. In Detroit’s 1943 riot, whites attacked blacks. Thirty-four people died in two days; most of them were black.

But I did not ask these questions. I was 14 years old. I did what my parents told me to do, without question. I was told to watch four-year-old Pamela, so I caught up her hand and kept watching my father.

By the time my father left to go to work, I knew something was terribly wrong.

Normally, he donned his blue police uniform before leaving for his commute. That year we did not have a car, so he rode the bus and his fare was free if he showed his badge — number 3182, which he kept pinned to his uniform. A father of 13 children appreciates any kind of savings.

But on Sunday, July 23, 1967, my father folded his blue short-sleeved shirt and his blue pants, and together with his gun belt, he put them into a brown paper bag. He slipped his badge into his pocket.

Blistering hot as that day was, he pulled on a sports coat over his grey shirt. I knew his sports coat concealed his gun.

I knew a gun was a part of every police officer’s uniform, though I never saw my father arm himself. He never played around, brandishing it like a gunslinger. It was a part of what he did to feed, clothe and house his family. It was not a toy. That was important to remember. There were 13 children in our house, seven of them boys.

I saw my father disarm himself many times. It was the first thing he did when he came home from work. When the door to my parents’ bedroom was open, I could see in from my own bed. It was always night when my father came home from work.  He’d say “howdy” to my mother on his way to their room, but otherwise was quiet as he pulled the black firearm from its holster. Door open or closed, I heard the bullets fall into the palm of his hand with a clink. He dropped them into a small wooden box that he stored in the top drawer of his tall chest of drawers. The gun he hid in a box on the high shelf in the closet.

He was orderly, indeed methodical.

On Sunday, July 23, 1967, my father walked out of our backyard and went through the alley out to the street on his way to work carrying a brown paper bag containing his police uniform. Normally a source of pride, he kept it hidden because it could make him a target for snipers.

After five days the civil disturbance — a civil war by any other name — was declared over, put down by the Detroit police and fire department, Michigan Army National Guard, Michigan State Police and the U.S. Army’s 101st and 82nd Airborne divisions, and martial law. Everything I remember about the 1967 riot, I saw at home.

Because my father was a Detroit police officer when the department employed so few African Americans officers, he was a source of pride for me, my family and our community. It rarely occurred to me that he had a dangerous job that could have led him to be targeted by cop killers, or be the subject of completely understandable protests of despicable police actions that we see in the 21st century. Until July 1967, my existence as a policeman’s daughter was normal, and as ordinary as my friends' whose fathers worked in the auto industry. That normalcy would have disappeared if each day when my father left home for his job to protect and serve, I worried about him dying.

Amid the news reports these days of great fear and animosity between the police and black Americans, one friend asked me if my father died in the line of duty. My father died in 1995 of complications from diabetes. He died a normal death, thank god.

Dedria Humphries Barker studied at the Iowa Writer's Workshop with the late James McPherson. She is a native of Detroit and a graduate of Wayne State University. She also wrote "How I Ended up at Kim Kardashian's Wedding" for Salon.