Shelter from the storm: Republicans have all intentions of protecting their president from problems

The president can complain that Republicans don't have his back. But the GOP's inactivity shows they actually do 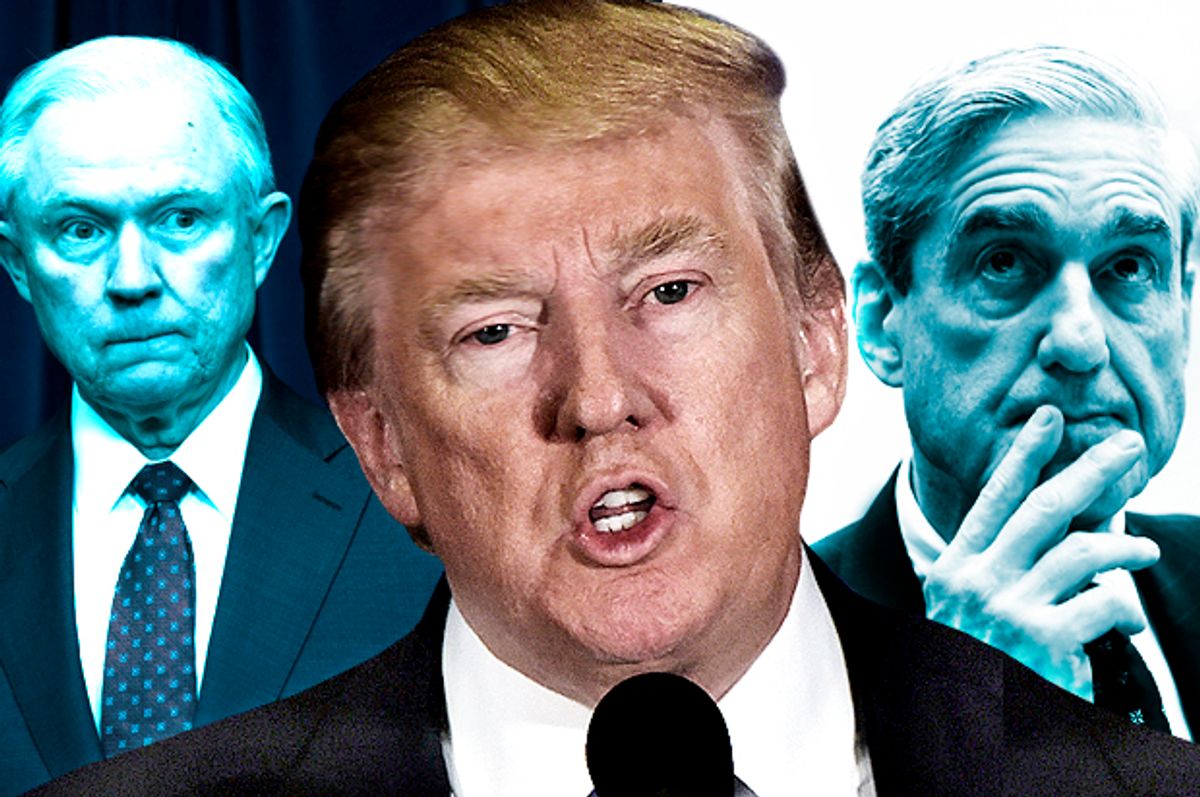 I have the feeling that we may look back on the week just past as a watershed moment in the President Donald Trump era. I know it seems as if we have those every other day, and it's true that this isn't the first one. Firing the FBI director, James Comey, certainly counts as a historical turning point. But last week was the six-month anniversary of the inauguration and it featured two events that I think may turn out to have been extremely important, even if nothing comes of it.

The first was the stunning interview with the New York Times which demonstrated that the president is psychologically unbalanced and dangerously ignorant. We knew that before. But he's getting worse not better.

It wasn't just the strange historical fantasies such as his assertion that Napoleon’s “one problem is he didn’t go to Russia that night because he had extracurricular activities,” or his obvious confusion between life insurance and health insurance. It wasn't even the fact that he seemed to have hallucinated that he'd instituted cast, sweeping reforms such as when he stated "I've given the farmers back their farms. I’ve given the builders back their land to build houses and to build other things.”  All of this was extremely bizarre to say the least. If you didn't know better you might think it was some kind of elaborate put-on.

But underneath this farcical display of presidential ineptitude was something more sinister. He spent much of the time railing against law enforcement officials whom he perceived to either be disloyal to him personally by failing to corrupt themselves on his behalf or are corruptly serving his enemies.

He smeared former FBI Director Comey with the accusation that his private briefing of the Christopher Steele dossier was an attempt to get "leverage" on the president. He threatened special prosecutor Robert Mueller that he'd better not go beyond what he sees as a very narrow mandate to look into the possible campaign collusion to look into his finances.

He said the current acting FBI director, Andrew McCabe, was tainted by the fact that his wife ran for office as a Democrat; and that Deputy Attorney General Rod Rosenstein can't be trusted because he's from Baltimore — and it's a Democratic city. Perhaps the most astonishing attack was made against his most loyal Republican ally, Attorney General Jeff Sessions, whom he seemed to have irrationally latched on to as the reason for all his troubles when he recused himself from the Russia investigation.

He is clearly terrified by the special prosecutor and is contemplating taking drastic action to put an end to his probe.

Which brings us to the second bombshell that happened last week. After this New York Times interview was published, the Washington Post reported that Trump had been talking to his lawyers about the presidential pardon and even if he might be able to pardon himself. If he wants to abruptly put an end to the investigation one imagines that might do it.

On Saturday, Trump tweeted this:

Trump's lawyer Jay Sekulow appeared with George Stephanopoulos on ABC News and said that this tweet meant nothing and that pardons had not been discussed at all.  Then Trump's new communications director Anthony Scaramucci told Fox News that he talked with president last week about the pardon but Trump said he wouldn't have to do it because he hadn't done anything wrong.  Clearly, it is on his mind.

The question of whether the president could conceivably pardon his accomplices and himself has been around since the drafting of the Constitution. Indeed,  the possibility of that is one of the reasons George Mason gave for refusing to sign it.  He wrote:

The president of the United States has the unrestrained power of granting pardons for treason, which may be sometimes exercised to screen from punishment those whom he had secretly instigated to commit the crime, and thereby prevent a discovery of his own guilt.

And who says no one ever anticipated someone like Donald Trump becoming president?

Other founders said that it was impossible to believe that any president would do such a thing. Why he'd be remembered as Benedict Arnold! James Madison wrote,  “If the president can be connected, in any suspicious manner, with any person, and there be grounds to believe he will shelter him, the House of Representatives can impeach him.” One might have assumed that at one time, but it's looks as though that's not going to work out.

After that shocking interview in which the president babbled ignorantly about history, policy and politics and then threatened and smeared law enforcement, inappropriately defined the boundaries of the special prosecutor's investigation and attempted to get the Attorney General to resign so that he can replace him with someone who won't recuse himself from the Russia probe, the Republican congressional majority gave a collective shrug. They don't care.

A few of the usual suspects like Senator Susan Collins of Maine said she thought he should just let the investigation play out. Kentucky Senator Rand Paul said that he believed Trump could pardon himself but "cautioned" him that there might be political fallout. For the most part, Republicans ran in cowardly fashion from the question, unwilling to stand up and do what's necessary in this situation which is to tell the president that if he fires the Special Prosecutor or starts pardoning people, they will have no choice but to start impeachment proceedings.

It's possible that they don't think he's really serious about this. It is pretty crazy. But it's obvious by that loony interview that he's losing his grip and that there aren't people around him who will restrain his worst impulses. He already fired James Comey. There is nothing really to stop him from firing Sessions, Rosenstein and anyone else who stands in his way.

And he does have a plenary pardon power although it's disputed whether he could pardon himself or issue a broad enough pardon to encompass a full scope of crimes his associates haven't even been charged with. Nonetheless, it's certainly possible that he will try and the only real way to stop him is for the Republican leadership in congress to let him know that they will not let him.

They have shown no sign that they will do their duty.

And yet their president is unsatisfied. It's not enough for them to simply let him get away with destroying every ethical norm and pushing every law to the limit. He demands that they defend his outrageous behavior. On Sunday he tweeted:

He couldn't be more wrong.  They are proving every day that they are more loyal to him than they are to their own oaths to the Constitution. He should be thanking them for their service.