On its new album, Arcade Fire shows a cynical side 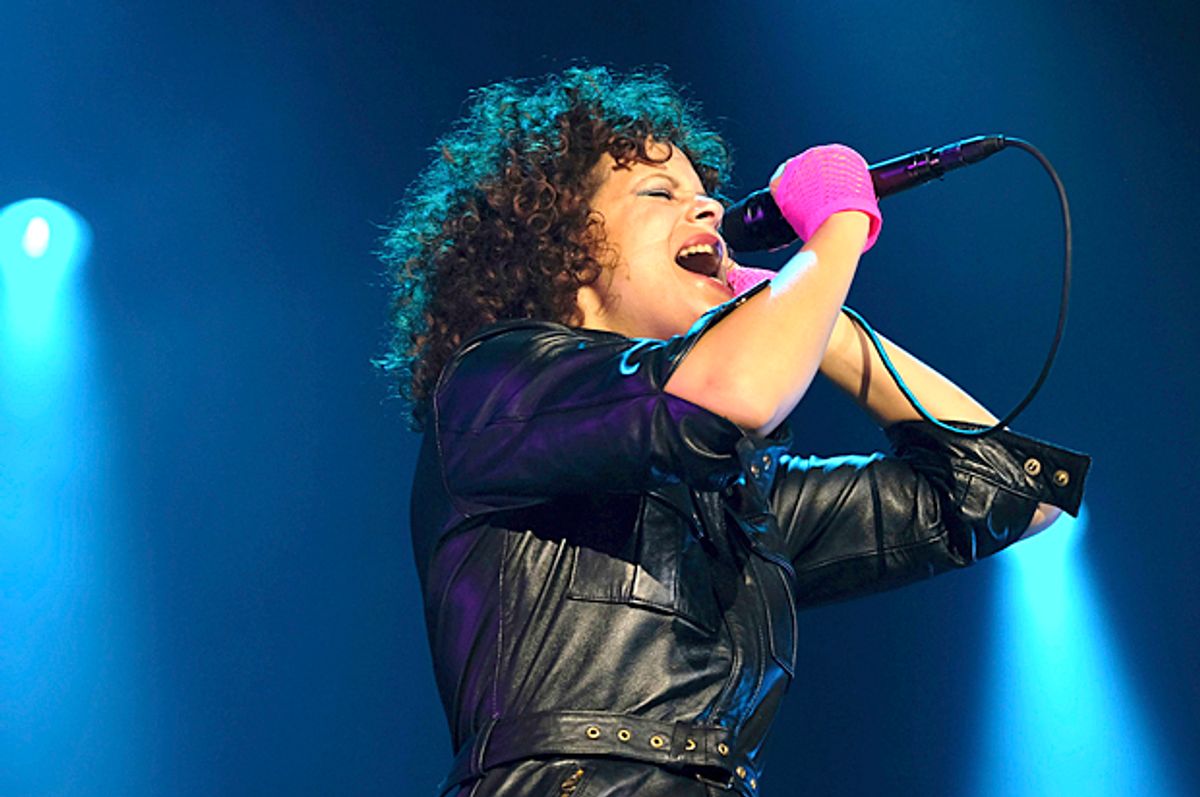 When Arcade Fire released their first major label album (“Funeral”) in 2004, critics were quick to fall in love. In hindsight, it seems like doing so was easy, almost obvious. The band’s sound, with its global and electronic influences coupled with the unique voices of husband-wife singers Win Butler and Régine Chassagne, was fresh. But the band’s spirit was familiar. Every note sounded earnest and urgent, tinged with desperation, hopefulness and tragedy.

“Funeral” was ambitious both as art and as pop. It contained four songs with the same title and it also contained a big, undeniable anthem (“Wake Up”). The band was immediately compared to groovy art-rock bands like the Talking Heads, and was soon thereafter anointed the heirs to heart-on-their-sleeves rock legends like Bruce Springsteen and U2.

From an outside perspective, it has always seemed like Arcade Fire has aimed to cut the difference between the two sides — art rock and arena rock — and tip the scales away from the direction they’re leaning in any given moment. In 2010, Win Butler, the band’s lead singer and leader, reflected that, "Even when we started out playing little art galleries in Montreal, we'd pick up on a certain level of cool stand-offishness in the crowd and just try and break through it. We wanted to connect with the audience in a way that other groups we played with didn't seem to really care about.”

Of course, on a subsequent tour Arcade Fire would bring the art galleries to the masses, performing arenas with giant papier-mâché masks over its members’ faces.

The masks may have added a layer between the band and its fans, but they were also theatrical, the sort of grand carnivalesque gesture that you’d expect from Arcade Fire. The band’s recent antics, though, have been harder to square.

In the leadup to Arcade Fire’s fifth major label album, “Everything Now,” the band has pressed select all on meta marketing. It has produced a sugar cereal, USB fidget spinners, satirical Kendall and Kylie Jenner t-shirts and, most recently, a satirical website called “Stereoyum” (a play on the music site Stereogum). The site is full of Arcade Fire content; it is to Stereogum what Clickhole was/is to Buzzfeed. Headlines include “Remember when people used to play Rockband?”; “Advertorial: How to get the cheapest flights guaranteed”; and “Premature Premature Evaluation: Arcade Fire Everything Now.”

That last piece is ostensibly the reason the entire site exists. The article is just what it says it is — an especially premature review of Arcade Fire’s new album — that cleverly preempts criticisms by satirically making them before critics. Thinking of trying to make sense of the way Arcade Fire gave several songs on “Everything Now” the same title? You might feel silly doing so after reading Arcade Fire’s analysis: “There are three songs called ‘Everything Now’ and two called ‘Infinite Content,’ and clearly they’re meant to provide some kind of throughline.”

How about weighing the influence of producer Thomas Bangalter (of Daft Punk)? Well, consider what Arcade Fire has to say: “The impact of Daft Punk’s Thomas Bangalter will be discussed at length, with at least 10 words about him written for every one that mentions the record’s other producer, Pulp’s Steve Mackey.”

As with Father John Misty, Arcade Fire’s paratextual content relates to the themes of “Everything Now.” The album is largely about navigating the digital age. “Infinite content, we’re infinitely content” is a line that will surely jam itself into your noggin and sing to you until you replace it with a DJ Khaled hook. Butler sings that song (“Infinite Content”) twice — first fast and then slow — but he does so playfully.

But “Everything Now” overwhelmingly reflects a cynical attitude towards all that the internet hath wrought. On “Signs of Life,” Butler sings “Those cool kids/ Stuck in the past/ Apartments of cigarette ash/ Looking for signs of life/ Looking for signs every night/ But there's no signs of life.” And the songs bookending “Signs of Life” are about media saturation killing originality and mediated conceptions of happiness leading people to kill themselves.

It’s all a pretty big bummer — not least because of who is singing these songs and performing these stunts. “Pure Comedy” was in line with Father John Misty’s cynical jester brand. But sincerity has always been an integral component of Arcade Fire’s music. To watch Arcade Fire thumb its nose at the world like this is like hearing a parent swear for the first time.

All of which might lead someone to the conclusion that now, 13 years after “Funeral,” Arcade Fire is in the old man stage of its career arc, barking about how much the world has changed since its members were kids. That would be a fairly easy bit of content to create. But the truth is that when you clear the unceasing drumbeat of posts and takes — in fairness: some of which comes via the band — you’re left with music imbued with an extraordinary amount of life. Arcade Fire comes out hot; a short intro is followed by three songs with beats that will pop you at the knees. The sixth song, “Chemistry” will do the same, while transporting you to the islands. And, man, Regine Chassagne’s saw of a voice never ceases to cut me in half (“Sprawl II (Mountains Beyond Mountains)” is the band’s best song in my book), and that’s as true on “Everything Now” as it has been on any previous album (particularly on “Electric Blue”).

“Everything Now” is a terrific album. (I imagine I’ll be ranking it higher than “Pure Comedy,” for what it’s worth.) I just wish enjoying it didn’t require breaking through the band’s cool stand-offishness.