Trump's "America First" campaign is already a total failure: He has diminished our standing in the world

Despite his patriotic bluster, Trump's words and deeds threaten to make America an outcast among nations 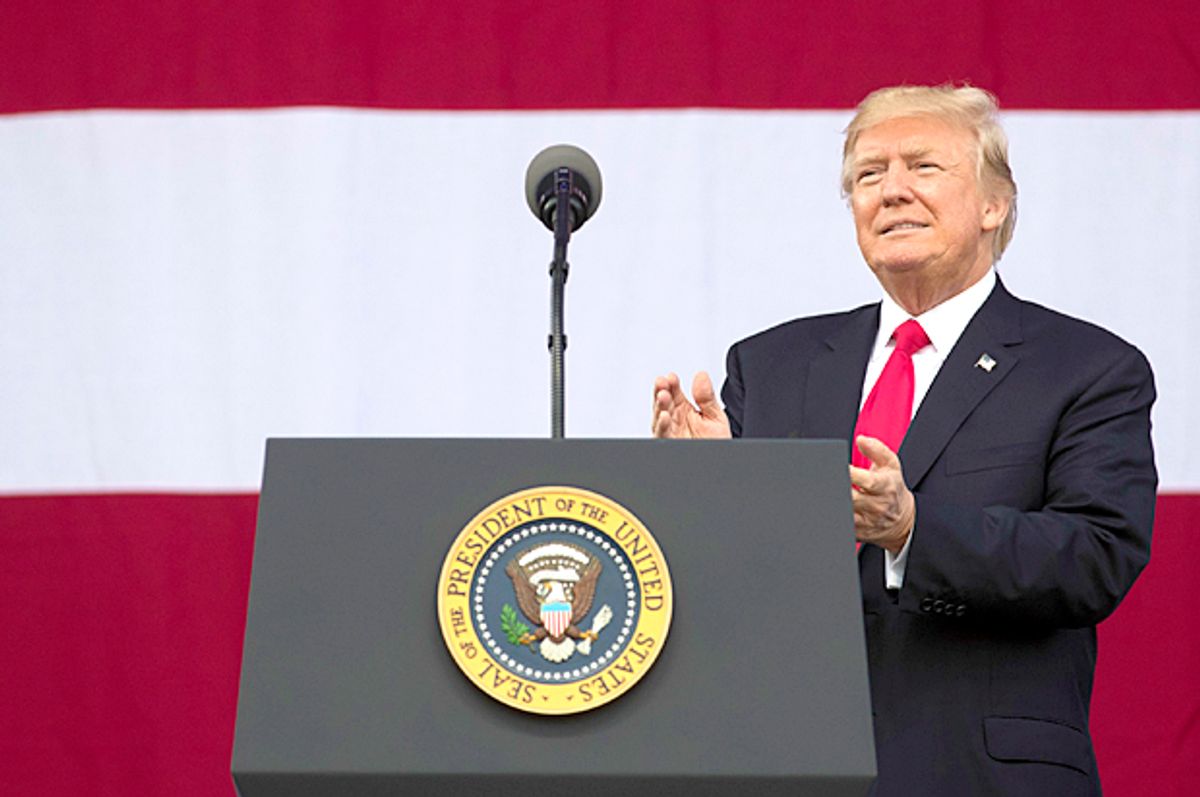 Six months into his presidency, the failure of Donald Trump's "America first" approach is evident. For one thing, America isn't first anymore — it's third.

Over the weekend, Trump once again sought to present himself as the defender of American values while addressing the Boy Scout jamboree in West Virginia, in a speech that startled many observers by descending into a naked appeal for political support. Meanwhile, a new study of "soft power" has found that Trump's election was pivotal in helping France become the leader in global influence. The University of Southern California-led study relied on polling from 25 countries to gauge a nation's ability to shape global preference and culture and harness international alliances.

Pew Research Center's recent survey of 37 counties found that in just a few months, Trump's presidency has devastated America's public image abroad. And that was according to data gathered before Trump announced his most high-profile "America first"-inspired action to date: the U.S. withdrawal from the Paris climate agreement.

"The most disappointing action for me from President Trump was his decision to pull out" of the Paris accords, Rep. Carolyn Maloney, a Democrat from New York, told me. "It was basically an agreement that America led and then to have America be the country that pulls out? I was dumbfounded by it."

We were chatting by the all-vegan food bar at the screening for "An Inconvenient Sequel," former Vice President Al Gore's new movie on the consequences of climate change, which was being screened in Washington Wednesday.

Maloney and other lawmakers, ambassadors and activists in attendance had held out hope that the president might "come to his senses" on Paris, as Gore put it, and did so right up until the day Trump made his Rose Garden address. It was the same hope I heard expressed repeatedly at climate talks in Marrakech, Morocco (which happened to coincide with the election), where global diplomats first learned they'd be negotiating not with Hillary Clinton, but with Trump.

Such hope, it turned out, was in vain.

Even Gore, who has recently remade his brand around fighting climate change with nonpartisan optimism and good humor, must acknowledge as much. "I never thought I'd be marching on the White House," he told his Washington audience. "But that's where we are, ladies and gentleman."

For Gore, who came within a whisker of being president in 2000, Trump's decision is déjà vu of the very worst sort.

After all, Democrats feel they have had the presidency essentially stolen from them twice in less than 20 years. Both Gore in 2000 and Hillary Clinton in 2016 won the popular vote but lost the White House — and for Gore, it must feel a bit like losing twice.

As vice president in 1997, Gore helped broker the landmark Kyoto climate deal only to see the presidential election pulled out from under him and George W. Bush go on to undo Gore's work by pulling out of the treaty.

Now it's happening all over again, with Trump exiting the Paris agreement, another deal the former vice president worked tirelessly to help realize. As Sen. Sheldon Whitehouse, D-R.I., the Senate's most outspoken climate hawk, put it to me of Gore's reality: "It's an unfortunate reboot."

Ironically enough, Trump said he was pulling out of Paris to improve America's global standing. "We don’t want other leaders and other countries laughing at us any more," he said in his June Rose Garden address. "And they won’t be. They won’t be."

Earth to the president: They already are.

Last week, when "The New York Times'" Coral Davenport asked Gore, just back from a trip to Australia, what world leaders think of the U.S., he couldn't help but chuckle. "I'm trying to choose my words carefully," he said, adding diplomatically — and somewhat euphemistically — that such leaders are "puzzled and deeply concerned."

It was perhaps a rhetorical question. We shouldn't need anyone to tell us that far from making America a more powerful player on the world stage, a decision to upend the consensus of 179 nations working in concert to stave off the worst effects of global warming has alienated most other nations on the planet.

As Gore noted with a wink, talking to his longtime friends in the climate fight in Washington, the pullout from Paris does not take effect right away. It will not do so, in fact, until November of 2020, the day after the next presidential election.

Lucia Graves is a writer based in Washington and a columnist for the Guardian.