Was the president's surprise announcement spurred by Fox News host with a long history of transphobia? 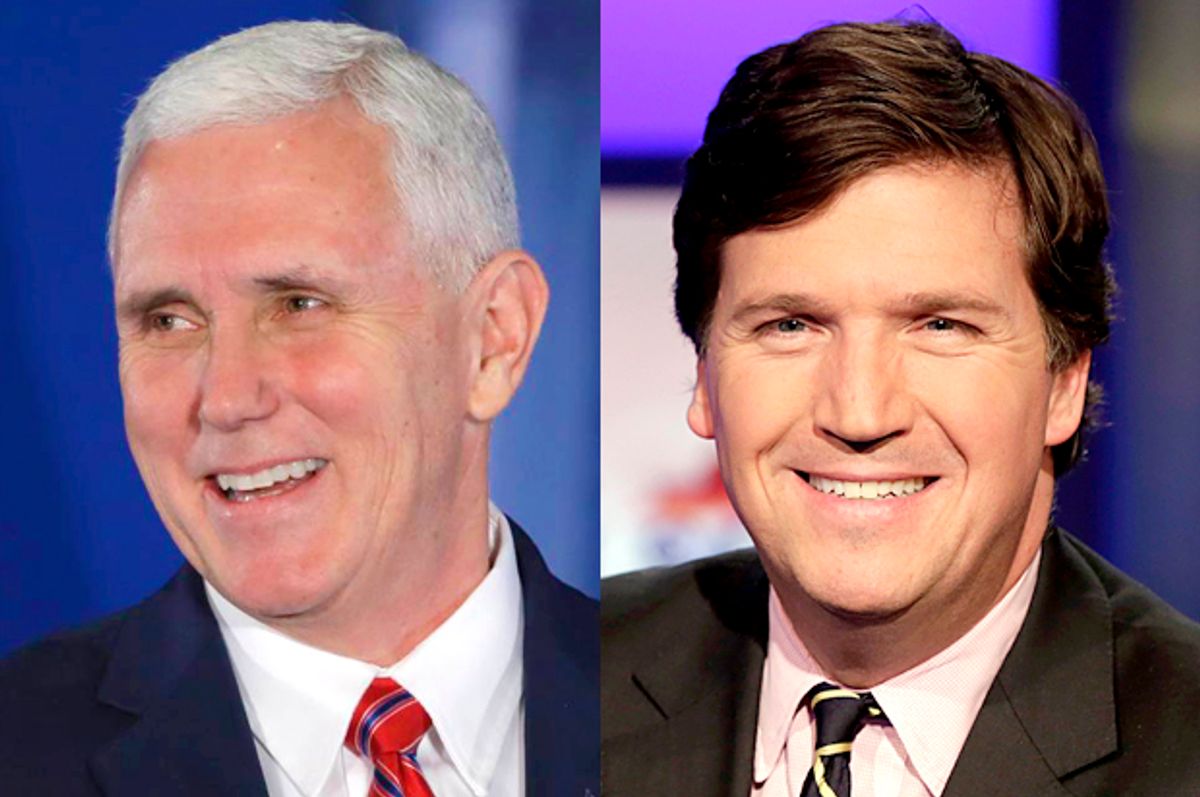 White House actions on Wednesday offered significant credence to the argument that President Donald Trump’s abrupt decision to ban transgender individuals from the military is a cynical ploy to play to his base during a time of increasing tumult.

Hours after Trump’s announcement on Twitter Wednesday morning, Fox News host Tucker Carlson was invited to the White House to interview Vice President Mike Pence, a staunch social conservative. Presumably this interview, to air Wednesday evening on Carlson's show, will include a discussion of Trump’s latest controversial decision, which has even been criticized by Republicans on Capitol Hill.

But any discussion between Carlson and Pence about the transgender ban in the military is more than a play to advance the White House’s narrative and agenda. It's also an attempt to legitimize a discriminatory and transphobic ideology.

Just days before being hosted by the White House, Carlson was on Fox News’ airwaves openly linking the transgender community to “child abuse.” Hosting the president of the anti-LGBTQ group American College of Pediatricians (ACPeds) -- not to be confused with the American Academy of Pediatrics (AAP), a mainstream professional group -- Carlson quoted an article by his guest, Dr. Michelle Cretella, that featured this explosive charge: "Transgender ideology has infiltrated my field and produced large-scale child abuse."

Cretella told Carlson and his Fox News viewers that transgender adolescents are “being put on the puberty blockers which essentially castrates them chemically, followed by surgical mutilation later on. This is child abuse; it’s not health care.” That argument was echoed in a column by Cretella published in the Heritage Foundation’s Daily Signal:

Today’s institutions that promote transition affirmation are pushing children to impersonate the opposite sex, sending many of them down the path of puberty blockers, sterilization, the removal of healthy body parts, and untold psychological damage. These harms constitute nothing less than institutionalized child abuse.

(Notably, the Heritage Foundation was one of the first conservative groups to openly praise Trump’s transgender military ban on Wednesday.)

Pence’s appearance on Carlson’s show on Wednesday evening, as the White House rolls out its controversial ban without the explicit backing of the Pentagon, strongly suggests that Trump is using trans lives to score cheap political points. (So much for his campaign pitch that he would be the best president for the LGBT community.)

Perversely, a White House official boasted to Time’s Zeke Miller on Wednesday that the administration “is thrilled media is focusing on [the] transgender service member issue.” Another administration official was more explicit about the politics behind the decision in comments to Axios. “This forces Democrats in Rust Belt states like Ohio, Michigan and Wisconsin, to take complete ownership of this issue," the official said. "How will the blue-collar voters in these states respond when senators up for re-election in 2018 like Debbie Stabenow are forced to make their opposition to this a key plank of their campaigns?"

And while Republicans in Congress may not be thrilled about the decision, none have actually tried to resist the change. On the other hand, Trump’s base of evangelical Christians has rejoiced at the news. The anti-LGBT group Liberty Counsel announced on Wednesday that its leader had met with White House officials and others about the need to reverse the Obama policy:

Last Friday, Jonathan Alexandre, Director of Public Policy at Liberty Counsel, met with White House officials and discussed this issue, stressing the importance of the President’s power to direct his generals to prioritize unit cohesion and military readiness rather than sacrificing them to the demands of the transgender lobby.

Tony Perkins, a frequent Fox News guest and the president of the Family Research Council, has also cheered the ban. His group has run an intensive campaign this summer against the decision to allow transgender members to serve openly.

Pence’s appearance on Carlson's show would seem to serve as the full-circle completion of this relationship between the evangelical lobby, the White House and Fox News to push civil rights backwards for transgender Americans.