Packing heat in Kansas, part 1: "I always had a love for firearms"

What makes someone become a gun owner? The clients of Kansas shooting range explain 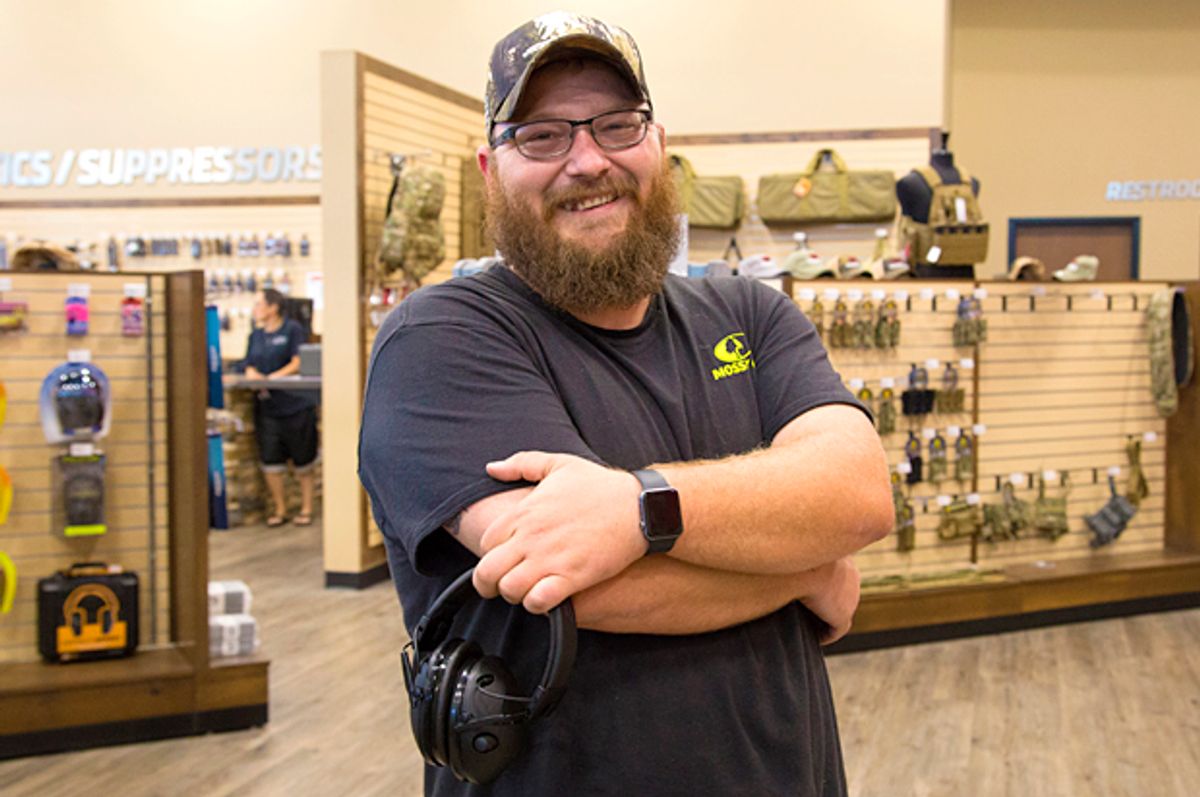 In the first part of this exploration into guns in the heartland, we hear from longtime owners, including hunters, who've grown up in gun culture. In our second part, we'll talk to newer members of the community.

Walking into a gun range in Kansas is a bit like walking into an underground community meeting. The people in charge have a strict regard for the rules, the regulars seem to all know each other’s names, and each member has a unique reason for joining. This club meeting features display cases filled with handguns and rifles and areas to shoot those weapons.

Kansas has been an epicenter of debate around guns, but there has been little conversation around why someone might choose to own a firearm.

The gun laws have gotten less restrictive in Kansas in recent years. Kansas now allows concealed carry on the campuses of all public universities and colleges. The Kansas Personal and Family Protection Act (KPFPA) law enables Kansans to carry concealed weapons in public buildings. Kansas also removed the requirement that individuals have a permit in order to conceal and carry a handgun in 2015.

Two shooting and training gun ranges, Thunderbird Firearms Academy and RANGE 54, are working to create a more inclusive gun culture in the Wichita area. Both facilities offer classes on handgun fundamentals, conceal and carry, and self-defense.

The people that use these businesses were asked what prompted them to be a firearm owner. Each reason for owning a gun is distinctive, but many share similar themes of safety, empowerment and self-reliance.

Ryan Pennock, owner of Thunderbird Firearms Academy, said that his goal is to help people feel safer and more prepared through focusing on the defensive aspect of guns. “I help people live safer lives through training by teaching them about the safety, fundamentals and defensive skills involved with using guns,” said Pennock. Bevan (asked not to share his last name for safety reasons)

“My father gave me a .22 rifle as a gift when I was 8 years old, and since then it’s been a lifestyle. I go to the shooting range and mostly use guns for protection purposes now.” “I started hunting with my dad as a kid. I graduated high school and joined the Marine Corps. Got out of the MarineCcorps. I was in law enforcement for 33 years. As a law enforcement officer, I was a firearms instructor. I taught people how to shoot. It’s why we have this facility here. We get tired of working with victims, and we want to teach people how to defend themselves.” Will: “I’ve been a firearms owner ever since I could walk. I’m an avid hunter and target shooter. I’ve grown up around firearms. That’s my daughter, and this is our foreign exchange student from Taiwan, who has never shot before. We’ve had other students come through, and I’ve all taken them shooting.” “I always had a love for firearms growing up. It never was like, one day I decided to start buying firearms; it’s always been a part of my life. You know, as I got older, the use of the firearms changed. It became much more focused on the defensive and protection; the conceal carry came into play. Then as I got a family it strengthened that much more. That’s my journey. I still hunt and things like that, but I realized that the primary need and design of guns is for the defensive. So now I own the state's largest training and shooting facility, and I help people live safer lives through training by teaching them about the safety, fundamentals and defensive skills involved with using guns.” “I grew up around guns. I hunted, fished, shot, used guns in Boy Scouts. After school, my buddies and I used to go hunt. I’ve owned guns to hunt all my life. I was in the United States Army and then retired. It was second nature having guns in the military. I got out and I now have a family of six kids. I just had a newborn. I carry a gun; my wife carries a gun. It’s all due to protecting our family.” Larry: “I’m a lifetime hunter. I’ve [owned] shotguns and rifles and have taken my girls and my wife hunting and that sort of thing. Stephanie is getting into forensic science and criminal justice. We thought it would be a good idea for her to own a handgun.”

Stephanie: “I just graduated from Oklahoma Christian University with my degree in Forensic Science and am now on the job search. Based on where a lot of the jobs [are], the chances are that I’ll be ending up in a metropolitan area. I’m a single female in my early twenties, and it’s not always the safest. I thought it would be a good idea to have some form of protection. I’ve grown up around guns and so did my dad. We’ve had good quality time going hunting and other shooting activities. There are a lot of good memories associated with guns." Abby (asked not to share her last name for safety reasons)

“I grew up on a farm in small town Kansas and my dad [taught me] how to shoot at a young age. I own a gun today primarily for self defense. I don’t carry it all the time, but I have one in my home. You never know what can happen. I bought a gun because my home got broken into when I was in college. I wasn’t home and I lived by myself. Since I was familiar with guns, I purchased one. It’s all about the operator. It’s not the gun that’s scary; it’s whose operating it.”