Sen. John Cornyn and Lt. Dan Patrick of Texas exploit the deaths of 10 people to push for anti-immigrant crackdown 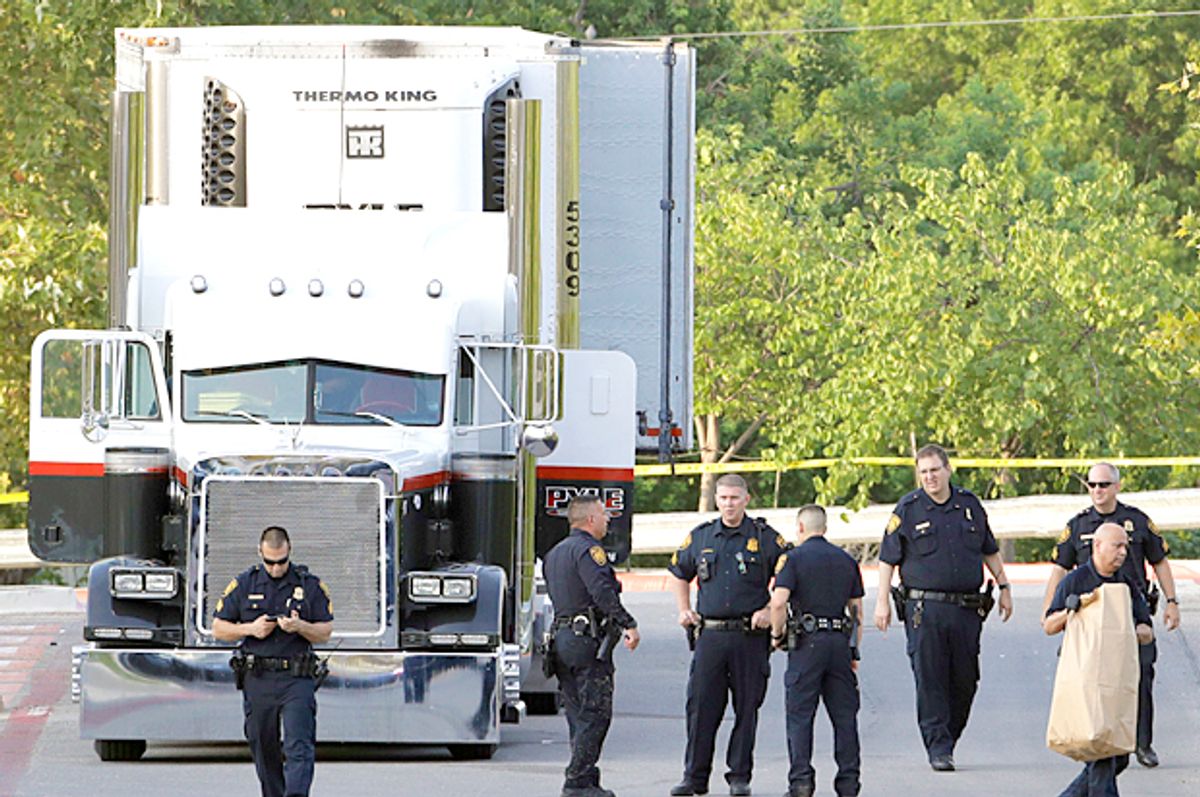 Early Sunday morning, a Walmart parking lot in San Antonio, Texas, became the sight of a grisly discovery: A group of immigrants, crammed into a trailer truck traveling through the state, had become overheated in the summer heat and stifling conditions developed in the truck. When the truck was discovered, eight people were dead and dozens more were severely ill. Two more people have since died, and several others are hospitalized in poor condition.

This horrific tragedy happened to strike just as anti-immigrant sentiment, fueled by President Donald Trump, has been on the rise across the country — and in Texas in particular. Two Texas Republicans, Lt. Gov. Dan Patrick and Sen. John Cornyn, swiftly pounced, exploiting the deaths of 10 innocent immigrants to stir even more hostility toward a group of people that Trump has been demonizing as criminals and deviants for two years.

"Today's tragedy is why I made passing Senate Bill 4 to ban sanctuary cities — which is now law — a top priority," Patrick wrote on Facebook a few hours after the discovery.

Patrick went on to claim that "sanctuary cities," a GOP scare term for cities where local police prioritize preventing crime over enforcing immigration law, "enable human smugglers and cartels" by enticing "people to believe they can come to America and Texas."

“It’s heartbreaking that politicians think it’s okay to use this tragedy to push their racist agenda," said Julieta Garibay, the campaign director and a co-founder of United We Dream, an immigrant advocacy organization.

Garibay pointed out that immigrants are "dropping their entire life to come to the U.S. because they hope there will be something better" and are focused on questions like "will I be able to feed my child tomorrow?" and "will I have enough money to have a house or a roof over my head?" It's unlikely, she said, that they are considering specific local policies about whether law enforcement is allowed to hassle people for their papers.

“It’s unfortunate that [Patrick is] politicizing this event for SB4, which does not have anything to do with what occurred, and in fact is going to make it more difficult for police to enforce smuggling laws in situations like this," explained Andre Segura, the legal director of the ACLU of Texas.

SB4 is a controversial law that does two things: It allows police to demand immigration papers or proof of citizenship from any person they detain, and it forces local police to hold any person for questioning that immigration officials ask them to. People who are U.S. citizens or legal residents sometimes get scooped up by these detainer requests, because immigration officials may mistake naturalized immigrants or green-card holders for undocumented people.

As Segura pointed out, SB4 will likely make it even harder to prevent human smugglers from running these exploitative, illegal and inhumane enterprises.

"Police chiefs across Texas and around the country publicly commented and made statements against SB4," explained Segura. "With laws like SB4, immigrants will be less likely to come forward and report crime -- for example, human smuggling. What we want is to make sure that people feel comfortable, on a local level, going to their police and saying, ‘I saw this and I would like to report it.'"

If people believe that police are likely to grill them about their immigration status or turn them over to immigration officials, many immigrants, both documented and undocumented, will choose to stay quiet, even if they know about these dangerous and criminal smuggling operations.

This isn't just speculation. In May, Lindsey Bever of The Washington Post reported that police leadership across the country is seeing a decline in crime reporting from Latino residents.

"Police say the problem is twofold," Bever wrote. "Not only might undocumented immigrants be too nervous to report violent crimes against them, but they might also be less willing to report crimes they witness."

After the San Antonio deaths, Sofia Lotto Persio of Newsweek wrote, "Experts have been warning for months that President Donald Trump’s policies would only increase risks for migrants, rather than affecting root causes of migration into the U.S."

She cites a March report put out by the risk analysis company Verisk Maplecroft that was titled "A Gift to Human Traffickers," in response to Trump's proposed anti-immigration policies.

"The construction of a US-Mexico border wall or stricter enforcement of deportation rules will not reduce the appeal of migrating for thousands of Latin Americans: poverty and gang violence will still push economic migrants north; and the demand for cheap, low-skilled labour will still pull migrants toward the US," the group said in a press release.

Instead, the company argued, the effect will be to drive immigrants further into the shadows, making it easier for human traffickers to exploit and abuse them and making it less likely that victims will report the abuse, for fear of deportation.

So it's hard to believe that Patrick or Cornyn actually care very much about these deaths. If they did, they wouldn't be pushing for laws that create obvious obstacles for immigrants who might report human rights abuses. Instead, these prominent Texas Republicans are exploiting this tragedy to score cheap political points and to add to the horror and trauma that already faces desperate people who are just looking for a way to survive.